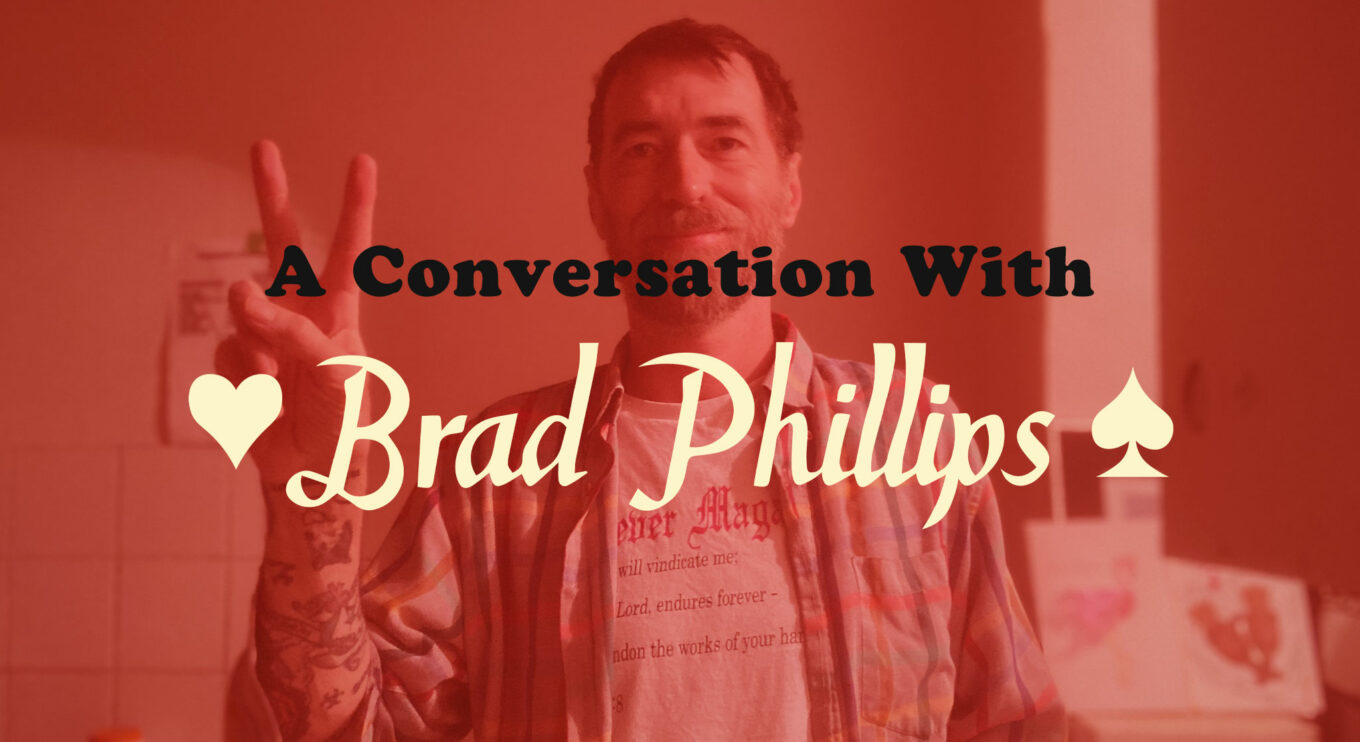 “Lying is an art, for sure, but it’s one I’m working hard to unlearn. Honesty is a mind-altering substance,” says Canadian painter and writer Brad Phillips.

Though he portrays a semi-real, semi-fictionalized version of himself in his 2019 short story collection, Essays and Fictions, honesty is what draws the reader in. What’s so intriguing about his stories of addiction and recovery is not whether or not they’re a factual retelling of events. It’s the unflinching way they invite readers into the mindset of someone at odds with their vices and mental afflictions. He’s not afraid to share gritty details or unsavory confessions—or at least he doesn’t show it. He writes with a frankness that’ll make you pause mid-sentence to catch your breath and say “whew.”

What might be most surprising about Phillips is that he didn’t realize he had the skills to be a writer until his 40s, long after he established himself as a visual artist. Much like his stories, his oil and watercolor paintings explore themes of drug addiction, sex, pop culture, and more. His artworks have been featured by galleries in major cities including Toronto and New York. In 2021, his exhibition, Grandpa Goes to Hollywood, showcased a combination of figurative and text-based paintings that formed autofiction narratives of their own.

We recently caught up with Brad Phillips to talk about Essays and Fictions, how much he enjoys designing shirts for his Threadless Artist Shop, and where Back to the Future ranks among his favorite ‘80s movies.

Your first book of short stories, Essays and Fictions, offers a glimpse into the psyche of an addict grappling with past trauma, mental illness, and patterns of self-destruction. Does writing about topics like these ever feel like a form of therapy for you? Or do you leave the brain massaging to the folks with degrees hanging behind their desks?

Brad Phillips: Hi Rafael, thank you for all of these thoughtful questions. I can’t really say that writing ever feels cathartic, no. I think though that I do get some sort of clarity by writing about experiences from my life. It lets me view them more as a spectator than as a participant, which I think can be helpful in some way that is difficult to articulate.

Your stories have touched many readers who can relate to the struggles of addiction and mental illness. You’ve also received high praise from the likes of filmmaker Bruce LaBruce and the late Anthony Bourdain. Has the reception of your book influenced how you approach your current projects? Do you feel any urge to defy expectations?

BP: I’ve been surprised by how successful the book has been. Three years after publication it’s still doing really well, and that definitely took me by surprise, and I’ve been super touched by how people have responded to it, who’ve reached out to me and said really beautiful things. Wasn’t expecting that. I don’t think that it’s influenced how I approach anything new, but the idea of defying expectations, yes, that’s real for me. I don’t like repeating myself, so since the book was fairly autobiographical and about the topics you mentioned, I’ve been writing a science-fiction book, because somehow that seemed like the exact opposite of my first book. I like to do whatever isn’t being done, whatever seems unlikely. I’m a contrarian, and I also like to challenge myself. If I don’t feel challenged, I get bored.

The ‘80s sci-fi classic Back to the Future comes up a few times in your book, particularly the Polaroid showing Marty McFly’s siblings fading away from existence. What makes this image resonate with you?

BP: I saw that movie in the theater with my mom and it was just a really nice experience that I remember clearly. I could bullshit you but I’m not sure what makes the image so appealing. I just really like it, the idea of…if you disappear in a photo from the past you disappear in the future—some oblique relationship to reincarnation, sci-fi, Buddhism…There’s a Mitch Hedberg joke I like, a guy says “Hey, you wanna see a photo of me from when I was younger?,” and the other dude says, “Hey man, every photo of you is from when you were younger.” There’s also a John Mulaney bit I like, where he talks about, with Back to the Future, why doesn’t anybody question why this teenager is best friends with a disgraced nuclear physicist…makes me laugh, a good point.

Where would you rank Back to the Future among your favorite ‘80s flicks? Do you have any special memories connected to it?

BP: It’s definitely in my top 100. I really like movies, so I’ve got a huge list. Yeah, like I mentioned, I just remember going to see it with my mom and sister in the theater, and going to the movies was a treat. It cost money for a single mom to take her kids to the movies, so it’s just a really sweet moment that I remember and am grateful for.

Whether it’s a piece of autofiction or a photograph you transform into an oil painting, much of your work appears to draw from real-life events, some of which are deeply personal. Has this approach ever led to any unintended consequences? How do you keep yourself from revealing too much?

BP: I think that I have revealed too much with certain writing of mine, and I’ve learned from the experience. With paintings, once they leave my studio, I don’t see them again. Writing is forever, it keeps circulating, so there are definitely a few things that, if I could go back in time, I would have made a bit more discreet.

Visual art and literature are two very different mediums. How did you discover you had a knack for writing prose?

BP: I really don’t know. It took me by surprise. When I moved back to the east coast in 2013, I started writing art reviews for magazines. I’d always wanted to be a writer far more than an artist, and one day I just started writing a story based around what I was dealing with at the time, and it felt very easy and natural. I shocked myself, at 40, realizing I could write.

In a photograph you titled Get a Real Job 2017, you show a series of business cards that say you hold such titles as private investigator, associate editor at Penguin, and talent agent at Creative Artists Agency. These are all real jobs, but none you’ve actually ever had (to my understanding, at least). In what ways is deception an art form?

BP: I feel like the more interesting question, no offense, is to ask in what ways is art a deception, a lie…Visual art and con art have a lot of similarities. You create an object that has no real utility, no inherent value, and through, essentially, confidence and word of mouth, [it gets] validation from other abstractions not rooted in utility (galleries), and it starts to become more and more expensive. Lying is an art, for sure, but it’s one I’m working hard to unlearn. Honesty is a mind-altering substance.

As a multi-disciplined artist who’s had solo exhibitions in major cities including London and New York, is there anything you find particularly unique or exciting about showcasing your art on t-shirts?

BP: Yeah, I really love making these shirts. A lot of ideas I have aren’t particularly suited to becoming paintings, and they also aren’t writing, they’re just sort of sketches for things that never would have been realized, but then shirts became a great place for them to exist. And I also like that—art is so exclusive, expensive, etc—young people or people who don’t have a lot of money (like me) can own something that feels like art. I honestly don’t see a distinction between a painting I make and a shirt I make, they’re both artworks. Shirts are more democratic. A lot of people who like my work are young, and so I love that they can own something of mine that’s not as precious and expensive as a painting.

Has making apparel for your Threadless Artist Shop inspired you to be creative in ways you haven’t explored before? Or have you found that your style of art naturally lends itself to apparel?

BP: I think the way I work and think is just really suited to this model of shirts, etc. Text and imagery together, that’s always been what I do, so I think it’s just a different, very flexible medium I can use to hang ideas on. I’m very grateful for it.

You have a t-shirt that says “I just don’t know how people do it,” and the words “just do it” are highlighted in red. What advice would you give fledgling artists who are looking to reach a larger audience?

BP: Be confident (or fake it), don’t compare yourself to others, don’t pay attention to what’s “cool” or popular, embrace the ideas you think are the most ridiculous and make you the most uncomfortable, don’t look for outside validation, be generous, help other people without expecting anything in return, be humble, be open to criticism, be grateful, try not to live in fear, meditate, drink water, smile at strangers and say hello.

On your Instagram, there’s a picture of a hand-written sign that says “Don’t Stab People,” which should probably be fairly obvious to most folks. Is this one of those cases where one person ruined it for everyone?

BP: I laughed reading this. I don’t know, I think anyone who’s out there stabbing people, they gotta stop. For one person to ruin stabbing for everyone, that means that there’s a context where stabbing can be chill, which I just can’t see being true.

What inspires you to create new art today?

BP: Love, comedy, beautiful fonts and typography, the horrible gift of the internet with its endless wealth of strange imagery, trying to be light-hearted in a difficult time, trying to connect with other people who are all struggling to figure out how to get through life, being sober, keeping busy, sharing beauty and jokes and meaning with strangers and loved ones.

What’s on the horizon for you? Any shows coming up? What can fans look forward to in the near future?

BP: I have a show of Works on Paper online at James Fuentes Gallery in New York in June, and I have a show of oil paintings at de boer gallery in Los Angeles in the fall/winter. I’m finishing my first novel which is called Death of a Dipshit. I’m writing about the brilliant painter Richard Bosman for ArtReview magazine. Trying to stay busy. Jogging, push-ups, meditation, being in love, calling my mom, counting my blessings.

Thanks to Brad Phillips for taking the time for this chat! Follow him on Instagram and Twitter and visit his Threadless Artist Shop to find t-shirts, accessories, and more.