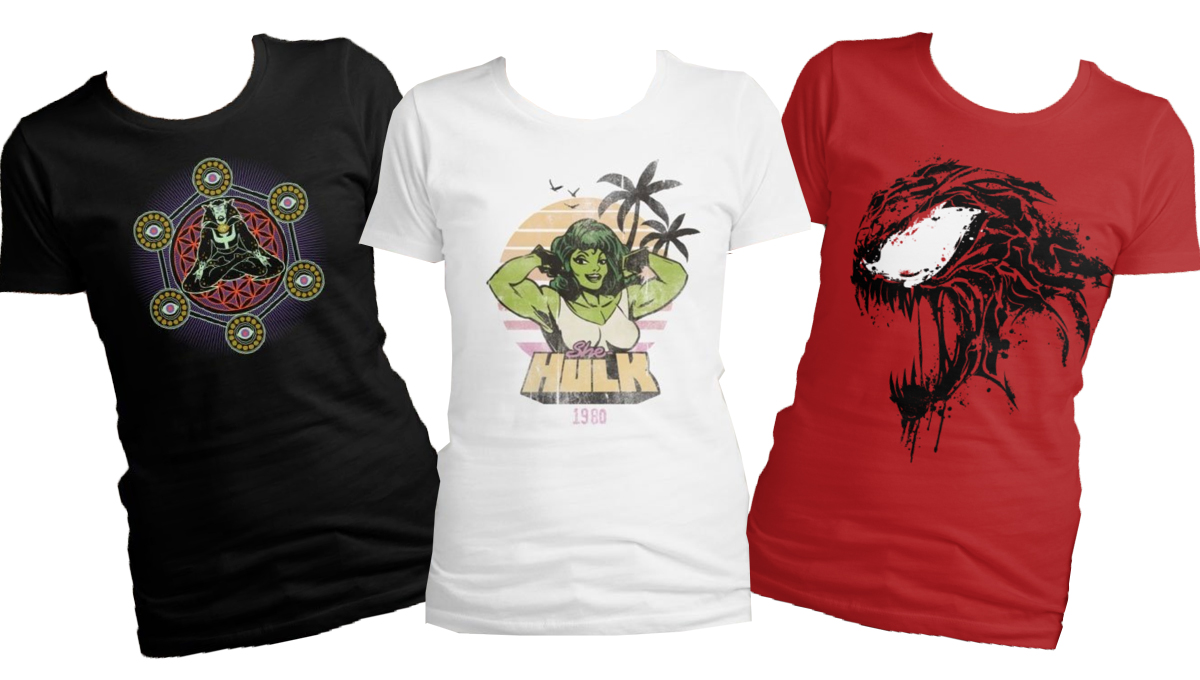 With comic books killin’ it on the big screen and on our computer and phone screens, it goes without saying that we’re geeking out a bit about the age of the comic book movie. And we wanted to geek out with you in the best way we knew how: with our Marvel challenge, celebrating the Marvel characters who have gotten their blockbuster debut and the more obscure (but awesome) characters alike! And facing off in this round of winners? Carnage, She-Hulk, and Doctor Strange!

We talked to the winners of this round of Marvel designs – Daniel Stevens, Daniel Burgess, and Diego Pedauye – about their designs, what superpower they would want and, of course, who they think would win in a showdown between these three characters. Check out what they had to say!

Tell us a little about yourself! Where are you from? What do you do? Who’s your favorite Marvel character and why?

You’ve worked with some pretty big brands! What’s been the most exciting work you’ve done so far?

You had a LOT of Marvel designs selected to be printed! Out of all of them, which was your favorite to work on?

My favorite design to work on was probably “Hero or Villain“, the Punisher shirt. I had such a clear idea for that design and it came out better than expected.

Tell us about this design! What was your process? Why did you choose Carnage for the Marvel challenge?

My goal was to actually create a design for each Marvel character in the competition, but I didn’t quite finish. Carnage was one character that I wanted to make sure I worked on because he’s such a great villain. He represents his name so well and I wanted to create a design that visualized that idea of insane carnage.

In a battle between Dr. Strange, Carnage, and She-Hulk, who would win?

Ohhh that’s easy, Dr. Strange would win. He got that magic.

My superpower would definitely be teleportation. That would just make life soooo easy and my commute to work would be a second.

Your turn! Tell us a little about yourself! Where are you from? What do you do? Who’s your favorite Marvel character and why?

I am from Manchester, but currently live and work in London. I am an illustrator, art director and all ’round visual person. Currently working on an animated TV show.

I’ve always had a preference for Spider-Man. He had the perfect balance between strength and vulnerability. There is a lovely scene in issue 33 by Stan Lee and Steve Ditko where Spider-Man is trapped under some machine; he musters the strength to escape and it’s amazing. I haven’t read too many issues but there’s something about that scene that sums up Spider-Man.

Your style seems so versatile! How do you find time to create so many different designs? Do you have a preferred style?

Versatility has always been the nature of most of my work; adaptability and always being able to deliver something new has been both a professional and personal goal. I wish I had a preferred style then I could stop stressing out about my work, but that kind of takes away the challenge.

Tell us about this design! What was your process? Why did you choose She-Hulk for the Marvel challenge?

I wanted a fun design, playful and not too serious. I felt She-Hulk would be a nice character for this, and after looking at the old She-Hulk comics from the ’80s with their flat vivid colours, the design idea just made sense.

In a battle between Dr. Strange, Carnage, and She-Hulk, who would win?

It should be Spider-Man, but I’d like to hang out with The Hulk and see if I could chill him out.

Congratulations on your second Threadless print! Tell us a little about yourself! Where are you from? What do you do? Who’s your favorite Marvel character and why?

Thanks! I’m very glad my designs had such impact on Threadless, I really appreciate the quality of the artists here. I am a Spanish illustrator and motion graphic designer living in Madrid. I think my favourite Marvel character is Spider-Man. He represents to me the perfect balance of coolness and geekiness.

You’ve had a lot of your work published in magazines! What’s been the most exciting commission so far?

There was this funny commission where I had to draw the portrait of a CEO from a gambling company. The press agent was very happy with the result and as bonus, they gave me some chips to spend on the casino!

What’s your biggest source of inspiration when you’re creating art?

I like to spend a lot of time in museums; classic paintings have always been a big source of inspiration to me. Having said that, the big kid inside me is always craving for anime, comics, or cartoons. Add some Internet pop culture to the mix and here is my inspirational cocktail.

Tell us about this design! What was your process? Why did you choose Dr. Strange for the Marvel challenge?

Dr. Strange grew on me, ‘specially since I started practicing meditation. His mystic way of approaching perils is so different from other Marvel characters and that hooked me. The process of doing this design was very enriching, as I spent some time researching astral projection, the third eye, and sacred geometry. I think the result speaks for itself.

I’d love to have a tequila night with Deadpool at some tacky bar.

I always wanted the power of teleportation. Not like Nightcrawler, but being able to go anywhere I can think of. World would be in the palm of one’s hand, wouldn’t it be nice?

Being an illustrator is extremely rewarding for moments like this, when a creation of yours becomes part of the world that gave birth to your heroes. Never give up your dreams, guys.

Shop all Marvel designs!
CategoriesArtists Speak Behind The Tees