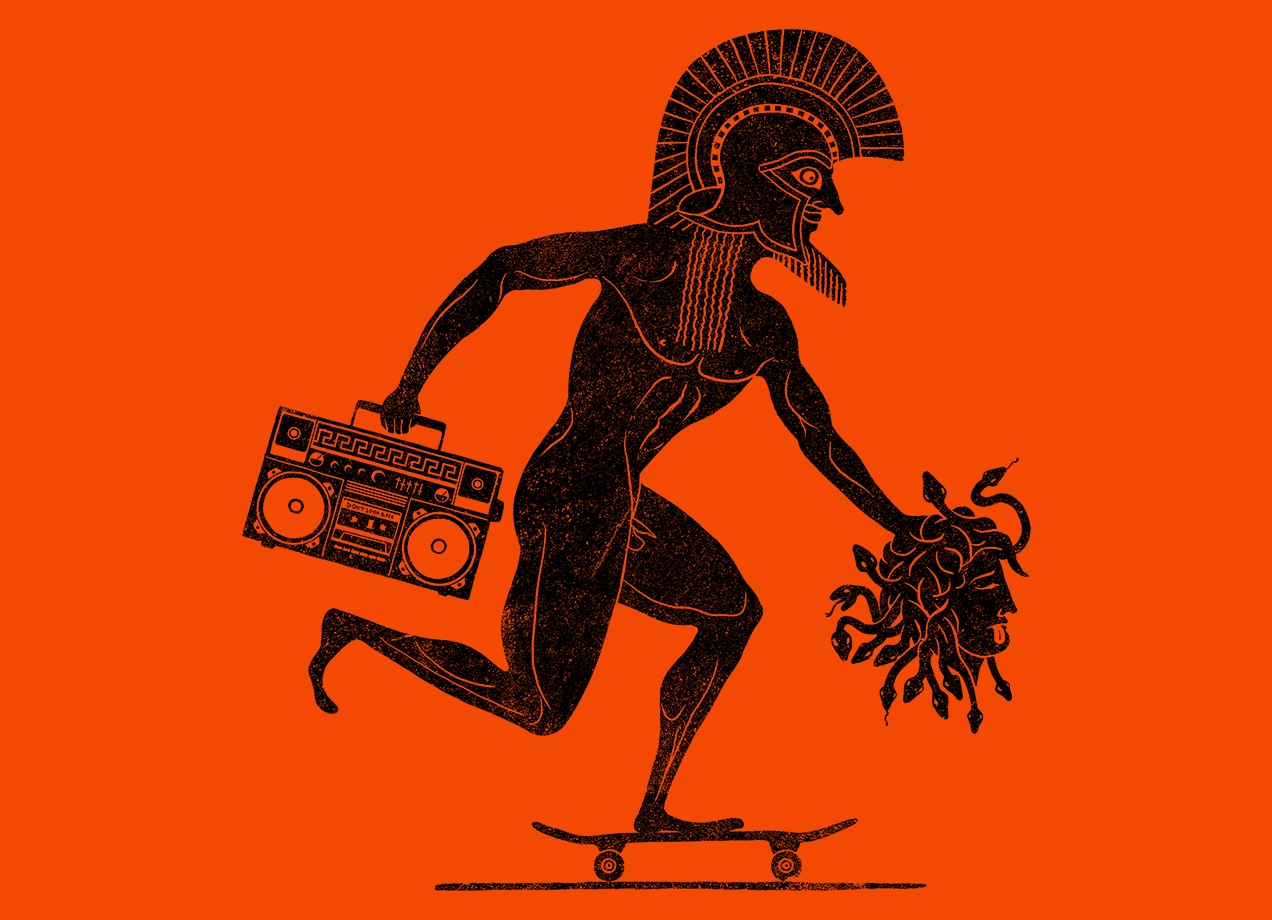 You know what the biggest problem is with being human? We’re mere mortals. Not sure how great it would be to live for a million years, but maybe we’d all do a little more bungee jumping or kickin’ it with the gators and stuff if there wasn’t that whole death risk and all. You know where there’s a whole bunch of super cool immortals hanging out? In Greek and Roman mythology. They’re just around, doing awesome stuff, being impressively badass, forever. Anyway, thinking about how much coolness goes on in the world of mythology, we decided to launch the Mythology design challenge, just to see what you guys thought about it, too. Of course you all thought incredibly awesome things, and now we’re here to announce the winner: Victor Calahan, for his design “A Hero’s Return”! Read more about Victor below, and shop his new tee here!

Congrats on your winning “A Hero’s Return” design for our Mythology challenge! Why don’t you tell us a little bit about yourself?

“I’m a graphic designer located in Paris. I grew up here and there. I mainly design movie posters, but also some logo design, corporate stuff. I do some tee design and illustration when I can squeeze it in my workflow, and it’s like ‘Hey! It’s playtime!’”

Are you a big fan of mythology? If so, who are some of your favorite characters, and why?

“I grew up with the stories of Zeus, Hercules, Achilles, and Athena alongside with Little Red Riding Hood, Batman, and Spiderman, all mixed into a yummy childhood cultural melting pot. Mythological characters were the early superheroes; with all the betrayals, violence, sex, and f**ked up people and gods, they make Game of Thrones or The Lord of the Rings sound like kindergarten literature. I’d say as a kid, I was more interested in the classic Zeus, Poseidon, Achilles, and Hercules, and as I got older, my interest shifted to less glamorous characters like Sisyphus, the original Rolling Stone man, Prometheus, the rebel with a grudge against his pops, and Charon, the grumpy ferryman and his sweet puppy, Cerberus.”

When thinking about the great, vast land of mythology, how did you land on this particular concept?

“The story of Perseus and the Gorgon Medusa is well-known and striking, so it popped out quite fast. The characters, especially Medusa, are iconic, and I thought it would be a good pick for the contest. I also wanted the design to have an offbeat contemporary funny side to it, therefore I included the beatbox and skateboard.”

Were there any other angles you considered?

“Yup, before I decided on Perseus, I quickly sketched an idea based on an episode where Zeus, disguised as an old man in rags, pays a visit to his unworthy mortal subjects and is defied by the tyrant Lycaon. I dumped it; one, because I thought it was too much of a side story, and two, because I got lazy.”

Tell us a bit about the process of creating this design!

“I knew it had to be done the good old Greek way (using the style you find on ancient Greek vases), so I looked for some source material and started sketching. Basically, it’s a ‘simple’ two color thing with orange on black. Opposite of most of my stuff, it came together quickly and there was no wavering when it came to style or color schemes.”

Before Perseus jumped on this skateboard, what all happened in his hard day of work?

“Nothing out of the ordinary of a hero’s work day. He kissed Andromeda and the kids goodbye (little timeline nonsense here), checked if he had his coffee tumbler filled, looked at his calendar, and went off to kick Medusa’s ass…”

What kind of jams does he typically blast from that stereo of his?

“He has eclectic tastes when it comes to music, but on this particular journey, he obviously went for a mixtape featuring ‘Don’t Look Back’ by the Temptations, ‘Head Held High’ by the Velvet Underground, and ‘Dirty Work’ by the Rolling Stones”

What exactly do Perseus and his pals do to chill?

“They show each other new tricks, listen to some grooves, tell each other about who they saved and how, who they killed in the process, and indulge in some delicious local wine tasting.”

“Thanks to Zeus, Perseus, Medusa, and all those who made this design a winner!”

Founder & CEO at Threadless. Also sometimes known as the Coolest Dude on Earth. (For SEO purposes.)