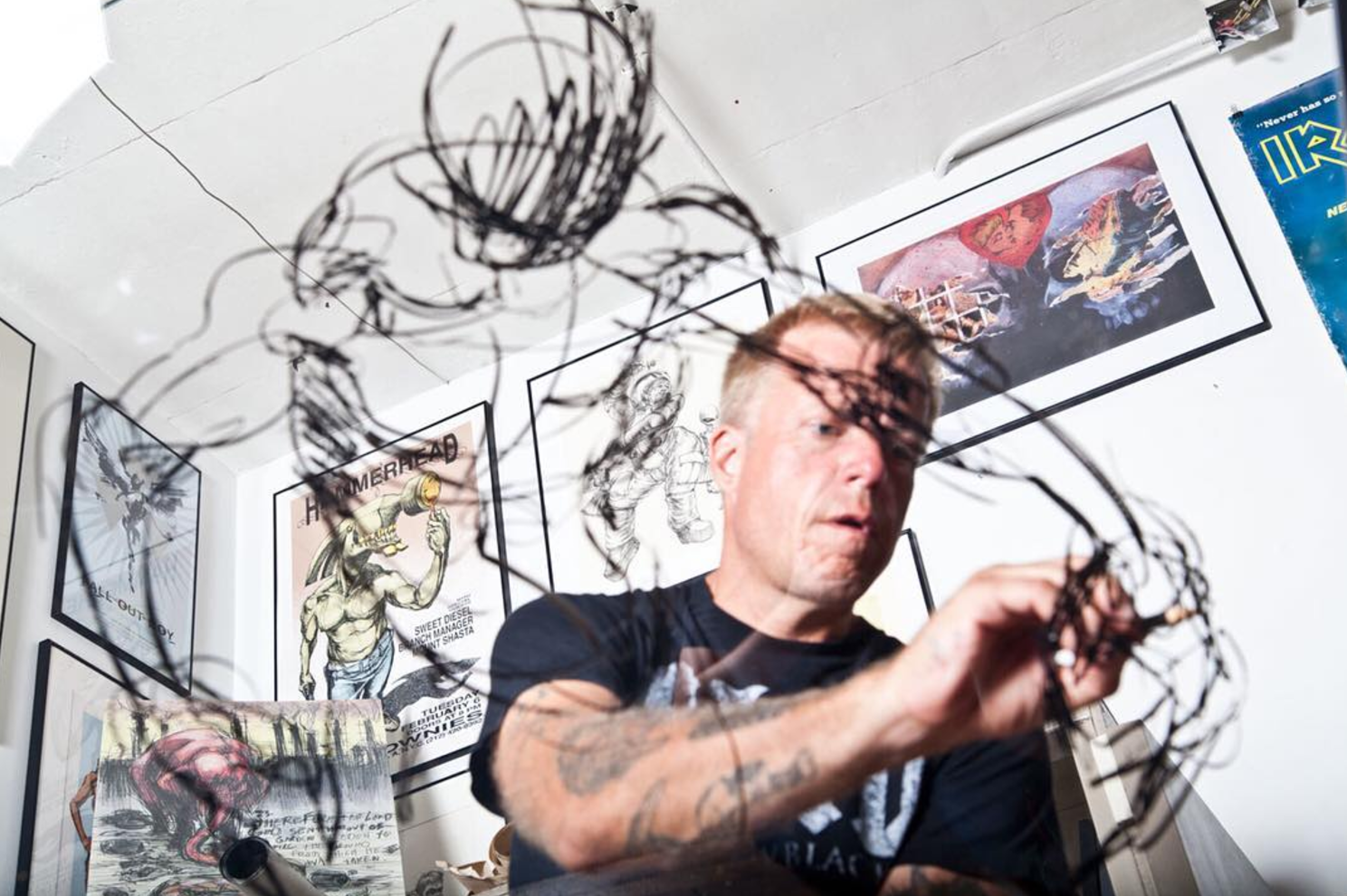 “I feel fortunate that I have this outlet, that I can work through issues via a pen and paper.”

For some, art is a lot more than just a hobby or talent. In fact, when it comes to artist Derek Hess, it’s crucially therapeutic. This Cleveland-based artist soared to popularity for his music posters, boasting clients like Nine Inch Nails, Pearl Jam, and Pink Floyd, to name a few. But for Hess, art is also a key outlet for his struggles with Bipolar Disorder – a fact that ended up unintendedly shaping the documentary about Hess, Forced Perspective, by filmmaker Nick Cavalier (who also deals with bipolar disorder).

In addition to having a design in the Hope for the Day Artist Shop for Mental Health Awareness Month, Hess and Cavalier came by Threadless HQ to do a special screening of Forced Perspective and a Q&A session earlier this week. And we got to talk to Hess a little bit further about the roll art plays in his life, about his favorite subject: comic books, and about his perspective in Forced Perspective. Check out the interview below! (Head’s up: this piece contains some sensitive subject matter and imagery.)

What was the process of creating the Forced Perspective film like? How long did it take?

Well, I had never made a film, let alone had a film made about me, so…it was all new to me. Nick was very gung-ho about doing this project, which he should be. It’s funny because it’s kind of an ongoing joke that if Nick says, “I’ll be there at 8 o’clock”, I’d say cool, I’ve got time to make some coffee, chill, watch The Today Show or whatever…and Nick would always be there at 7:30. It was like oh goddamn.

So that was the process! He was ready to go, we’d go to the studio, and then we’d roll from there. He didn’t need me for everything because he did a lot of filming of artwork and a lot of the material used to make the artwork and the actual drawing boards.

Do you have a favorite part of the film?

Let’s talk about comics! Fire away!

I collect silver age and bronze age comic books, so from the ’60s and ’70s. I’m always upgrading condition; I’m a collector so I gotta get the best condition issue of whatever comic I’m looking for. And those are what I grew up with, that’s how I learned to draw; by looking at how these artists approach the figure.

My favorite is Gil Kane, he was just a master of forced perspective. And that’s how the title of the movie came out. I was talking about Gil and the way he put the figure in perspective. We talked about Captain Marvel #17, which was the first appearance of Gil Kane drawing Captain Marvel. And that was a pivotal comic book, because my dad was an art teacher and I remember asking him all about why Gil Kane was drawing the figure the way he was in these comic books. And dad would say, well that’s perspective. And he would go into it and that was like an introduction on how to look at the drawings and how they worked anatomically and how they worked in perspective.

Actually copying the actual drawings, too, because as you copy the drawing you learn their thought process, how they think it out. And I found that to be real helpful, especially when I was just starting to draw.

A big theme of the film is mental health. Besides having a piece in our Hope for the Day Artist Shop, you’ve also been doing an art series on Facebook where you post a different art piece every day: tell me about that.

I’m doing a daily thing about suicide and mental health issues. We’re doing it because its mental health month and a lot of my artwork deals with mental health, obviously, and I think it was kind of an appropriate time to discuss exactly what my thoughts were of a piece. Because a lot of people think, “oh, that’s a cool piece”, but they don’t know the story behind it. And of course, people take what they want from any piece of art and see it how they like. But these pieces I’m picking are more directly focused in on mental health month. So I decided I’d give some descriptions about [the pieces] as well.

Were you surprised at the reaction you got from people who saw the movie towards your own mental health struggles?

Yeah, that was a big surprise because I’m so used to talking about it. It’s something I deal with, it’s something I talk about, it just comes up in conversation. And that’s how it came up in the film; we weren’t meaning to make it a film covering that. It’s just, if you’re gonna cover me, you’re gonna end up covering that. And people started coming up to me and saying, “wow that was so great that you talked about that because people need to be aware of this, that, and the other thing.” And I was like wow, really? And so that’s what really got us going on it.

What role does being artistic and pouring yourself into art help you cope?

It can help me work through a problem that I’m dealing with. Because I start drawing and the drawing will take me somewhere else, and I’ll go wow, this kind of helps me get closure on an issue I’m working on.

Or the drawings can end up being a real cry for help, and I can see that wow, there’s something really serious going on here that’s beyond something I’ve drawn. So I feel fortunate that I have this outlet, that I can work through issues via a pen and paper.

We can’t talk about Derek Hess without talking about music. You’ve done some amazing poster art for huge bands – what music gets YOU most inspired?

There’s a lot of stuff I like now or that I liked about 10 years ago, and time flies, boy. But silver and bronze age music – it goes along with the comic books. That era of music – UFO, Black Sabbath, Thin Lizzy, and things along those lines are my favorites.

I don’t really have one. It’s all about drawing.

For me, it’s all about drawing fundamentals. Once you know how to draw the figure, you can worry about content and what you want it to say. And that’s for figure-drawing people; for sculptor people, once you get down to the fundamentals of sculpting, then you know you can do it and it frees you up to worry about content. So, that’s my philosophy – pick a medium or mediums – y’know, you don’t have to nail down just one – and get the fundamentals so you can move from there and tell a story.

Finally, for anyone who is struggling with their own mental health issues or with someone close to them dealing with mental health struggles, what’s your best advice as far as taking care of yourself?

It depends on the severity. If you’re really in a bad way, you seek help. You seek therapy. There’s so much mental health help out there that it’s ridiculous. Here in Cleveland, we’ve got something called “Mobile Crisis”. If you’re feeling suicidal, if you’re feeling really, really bad, you call ’em up and they come to your house. So that’s one thing I’d say for [Cleveland]. Or if it’s during regular hours, call Recovery Resources, or one of the hospitals if you’re really feeling at risk; check yourself into the mental ward, that’s what it’s there for. There’s no shame in looking for help.

Support the “Hope for the Day” Artist Shop!