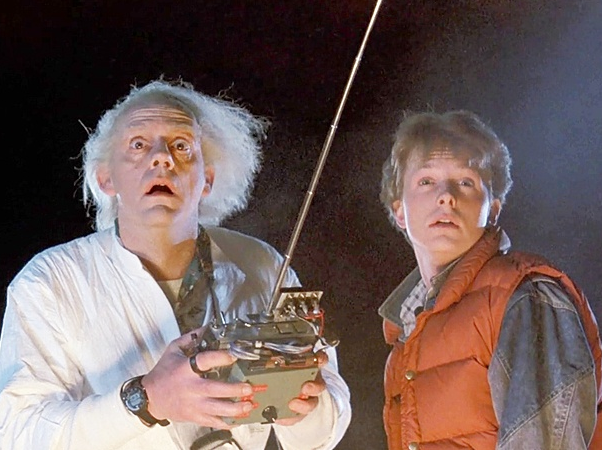 In honor of Marty’s upcoming arrival on October 21st, 2015 (he may be surprised by our shameful lack of hoverboards…), we’re launching our Back to the Future collection with some heavy designs for a series that is both nostalgic and futuristic.

Help us choose the grand prize winner from our Back to the Future challenge by liking, commenting on, sharing, or purchasing your favorite design! One person that participates will win their favorite ten tees from the collection!

We asked some of our designers from the BTTF challenge one of the most difficult questions we’ve ever asked anyone: What is your favorite Back to the Future movie and why?

Even though the first one was amazing back in the day and opened our young minds to time travel, I have to say that the second part blew my mind when I saw it…the concept of alternate timelines, the way of showing a not-too-distant-future, and the fact that Marty was crossing paths with the Marty of the previous movie was so creative that it became an instant childhood favorite for me.

I love the second movie. Not only because it inspired real life innovation deadlines for 2015, but I also love that Marty travels back to 1955 again, implying that there was a lot of action taking place behind the scenes of the first movie.

The first movie is always my favorite. Seeing all the characters for the first time and the exciting events lead you to watching all three parts. Best part is when the lightning strikes the clock tower at 10:04 PM.

My heart belongs to Part III, loaded with clever easter eggs – like the symbol for atomic energy embroidered on Marty’s western shirt. But for all the emphasis that’s been placed on Future Boy throughout the trilogy, we finally get to spend some quality time with Doc – who turns out to be a cute old sap and a total lightweight. Cheers to Wake-up juice.

The first Back to the Future movie is my favorite of the trilogy. There are so many great lines (The way I see it, if you’re gonna build a time machine into a car, why not do it with some style?), so many great scenes (George’s epic Biff knockout), and of course, the DeLorean. Hands down the coolest time machine in movie history.

The first movie is just wow. All those new concepts for time, travel, and time travel are awesome…and the special effects? Brilliant! Thanks Doc! If I could visit a special place, it would be the future…AND the past.

If you’re making me choose…I gotta go with the first movie. But honestly, the trilogy feels like one film to me, especially since the 2nd film starts with the last scene of the 1st movie, and the 3rd movie starts moments after the 2nd ends. I’m sure someone on the internet has edited them into one epic 6-hour masterpiece…and I’d like them to send it to me. The whole thing is just so funny, imaginitive, and 100% pure movie magic.

Our favorite Back to the Future is the first one, that came as a sucker punch and presented us with this amazing universe. The element of surprise has a sweet taste after all :)

Our favorite of the three Back to the Future movies is the second one because the hoverboard appears in that movie.

It’s hard to choose which one I prefer…they’re all great. However, the futuristic atmosphere of Back to the Future 2 made me dream a lot. We are in 2015 and I still expect my hoverboard!

Oh LáLá…I can’t choose one over the others! This is an intertwined triology…But I most love 1955 scenes of the second movie. It’s ‘another look’ to what happens in the first movie and very well combined…The second Marty hasn’t changed the first one’s story. Also Doc the same…Great Scott!

I just love the first film. The perfect combination of comedy, sci-fi, and romance is classic. That incredible ’80s feel? You can’t beat it. Undoubtedly the best time travel movie ever made!

Whilst I love the whole trilogy for different reasons, I’ll have to choose the first movie. Seeing it was a big deal because for the first time ever they showed it in the local town hall during the summer vacation from school. The town hall was usually reserved for darts tournaments, junk sales, and private functions. Virtually all of my school friends were there – it was a really exciting thing to happen in my town. I watched the whole trilogy again as inspiration for the challenge and it stands the test of time really well, even if they were slightly off with their vision of the future!

My preferred movie of BTTF is the second one, because all of the future stuff in it is really enjoyable. The hoverboards, the clothes, the colors, the old Biff, plus the plot of the movie…oh great Scott, it’s so intricate and heavy.

I would say that Part II has the most iconic scenes and jokes (like the infamous hoverboard scene). Also the absolutely great cult future stuff, like Power Laces, the flying DeLorean – that makes me smile as a nerd. And I ‘lol’ so hard when I see the chicken scene in 2015 with the great welcoming, “Was macht das Gehänge, McFly?” (Hey how’s it hanging, McFly?)