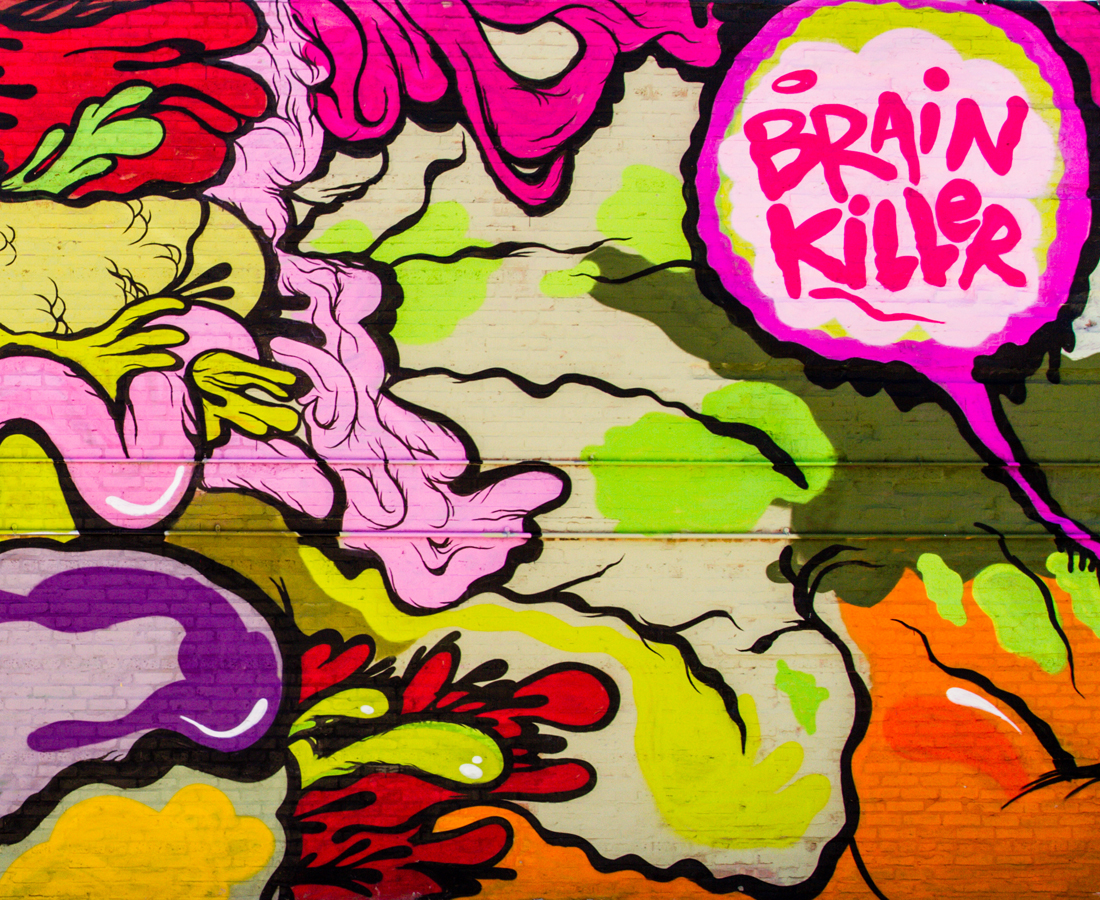 From muralist Elloo Elloo and her awesome Artist Shop, to local shows

like “Once Upon a Wall,” there are so many different styles of art to be seen in the street art scene in Chicago – a world we have a special fondness for.

So we were pretty stoked when Chicago street artist “Brain Killer” not only opened an Artist Shop, but daredevil’d up to the top of our building’s watchtower to do a mural for our new office.

You wouldn’t typically put “street artist,” “producer,” and “cameraman” in the same sentence, but Brain Killer somehow balances it all. We talked to him about his daring water tower mural, rad Artist Shop, and how he got to where he is today.

You’re kind of a jack of all trades! Tell us a little bit about everything you do and how you got started.

In some way or another since I was a kid, I’ve always been doing something creative. I’ve always been the type to learn and do as much as I could. I never subscribed to the idea of picking one thing and sticking to it. Producing and executing ideas is what I do, everything else is just the tool to make that happen. In a nut shell, I went to art school, film school, concentrated in illustration and cinematography mostly. In survival mode in LA, I learned on the job to be a television producer and through that, pursued writing, development, and directing. My talents and education in art and camera just naturally became part of my arsenal. As a producer there have been times I couldn’t find the right person for a job, so I’d say fuck it, I’ll shoot it myself, I’ll design it myself, I’ll cut it myself, I’ll build it myself, and before I knew it I taught myself a lot of different skills. It’s not easy and I burn out from time to time. When the art started taking off, I’ve found I enjoy this the most right now and it’s my main focus at the moment.

I always joke that I’m institutionalized, I don’t know what I’d do if not working in the creative field in some form or another. The only trade I know outside of being a creative professional is fabricating artificial limbs (family business) and that just isn’t for me.

Your art has such a specific look to it – how has your style developed?

Thank you! I’m always trying to get better technically. Right now I feel like I’m learning to be an artist again, I put it down for so long when I pursued my film career that I feel like I’m still catching up and getting back to – and ideally beyond – the level I was at when I was in art school. I think that’s why I have a unique look – I’m still pulling from influences from my youth and trying new things and what comes out is this weird mashup. I’m still trying to find that right combination and crack the code of my voice. Where my ideas can flow out me effortlessly where I can focus more on concept and not so much on how to execute.

I haven’t seen a lot of street artists selling their designs on apparel! What made you want to start?

The opportunity presented itself and I’m not sure I felt like it was the right time but I’ve learned a long time ago to seize an opportunity and figure it out, you might not get the opportunity again.

You painted the water tower at our new building, which looks awesome but oh man, that seems like it was terrifying! What was that like?

It was terrifying, it was cold and windy and there wasn’t room to paint and nothing to hang onto. You can’t put a lift up that high or a scaffold without it costing a ton of loot. So I had to paint it on a 7-foot ladder with a harness. The ladder was taller than the guard rail and if I fell, I’d be dangling over the side. I hate that thing, the backside is all janky because there was so little catwalk to stand on that side.

Ahh! Have you ever taken on a project that high up?

I have, not on a mural. But on film sets and in college I had a summer job doing ornamental building restoration and I worked on a swing stage on a 30-story building. That job kind of ruined me for heights.

How did you get started doing street art and murals?

It’s always been a part of my interests and I wrote graffiti as a kid. That’s always just been a part of my narrative. Every few years the itch comes knocking, ask anyone who’s ever done graffiti, it’s like a drug…When you think you’ve grown up, it comes calling, no one ever quits for good and people who say they have, probably never really did it in the first place.

I was doing it in my early teens in Chicago. On a summer trip to Paris when I was 14, I saw a whole different side to it and realized it wasn’t just back in the states. Then picked it up again in my later teens, and again on a European trip to Holland I was taking photos of everything there, and the interest never died.

When I was living in LA the “street art” scene was exploding and I was at the epicenter, so I started going to shows with camera crews and started pitching artists to come on Attack of the Show. I got to work with Invader before Exit Through the Gift Shop. Buff Monster was a guest on the show back when he was getting started, and I got to interview Shepard Fairey. I was heavily into the vinyl toy world and a lot of street artists were making a name in that scene too. I was on the road a lot, and in other cities it became a hobby to seek it out – in NY, Tokyo, anywhere I went.

When I came back to Chicago, I reconnected with a lot of people and started going to shows here too. One of the companies I was working started buying segments I was producing on the art scene here. Over time, I became pretty engrained in the culture in Chicago and eventually launched Brain Killer as a personal project. It was mainly an outlet for filmmaking, but as I made more friends and worked with more people, opportunities came up to flex my skills as an artist, and I started getting asked to be in shows. I started to gain some momentum and I took it to the streets, because the itch was there again and I haven’t stopped producing art since. Right now there isn’t a lot of time for street stuff or video work, but the pendulum will swing back and when I’m ready those aspects will get the attention they need. Wow, that’s quite a personal journey. How do you balance being a commercial producer and so-called “low-brow” artist? That’s a big contrast!

I’ve been fortunate that my commercial projects have been with cool companies producing interesting work. It’s really been a natural transition, all my mediums play pretty well together. The demographic for all the work I’ve done has skewed pretty young.

Why the mask when you create your murals?

I don’t wear the mask when I paint, that would be silly. The mask in my opinion isn’t a mask. It’s my alter ego. My true identity is hardly a secret but I’m an entertainer and for me that is the real Brain Killer. He has his own backstory, he’s all the things I can’t be in real life. He’s a time traveller, he’s a billionaire playboy, a drunk, and just an all around degenerate. If he had parents, he’d be the love child of an orgy between Richard Branson, Missy Elliot and Yolandi Visser. Riff Raff and Satan may have shown up to the party at some point too. 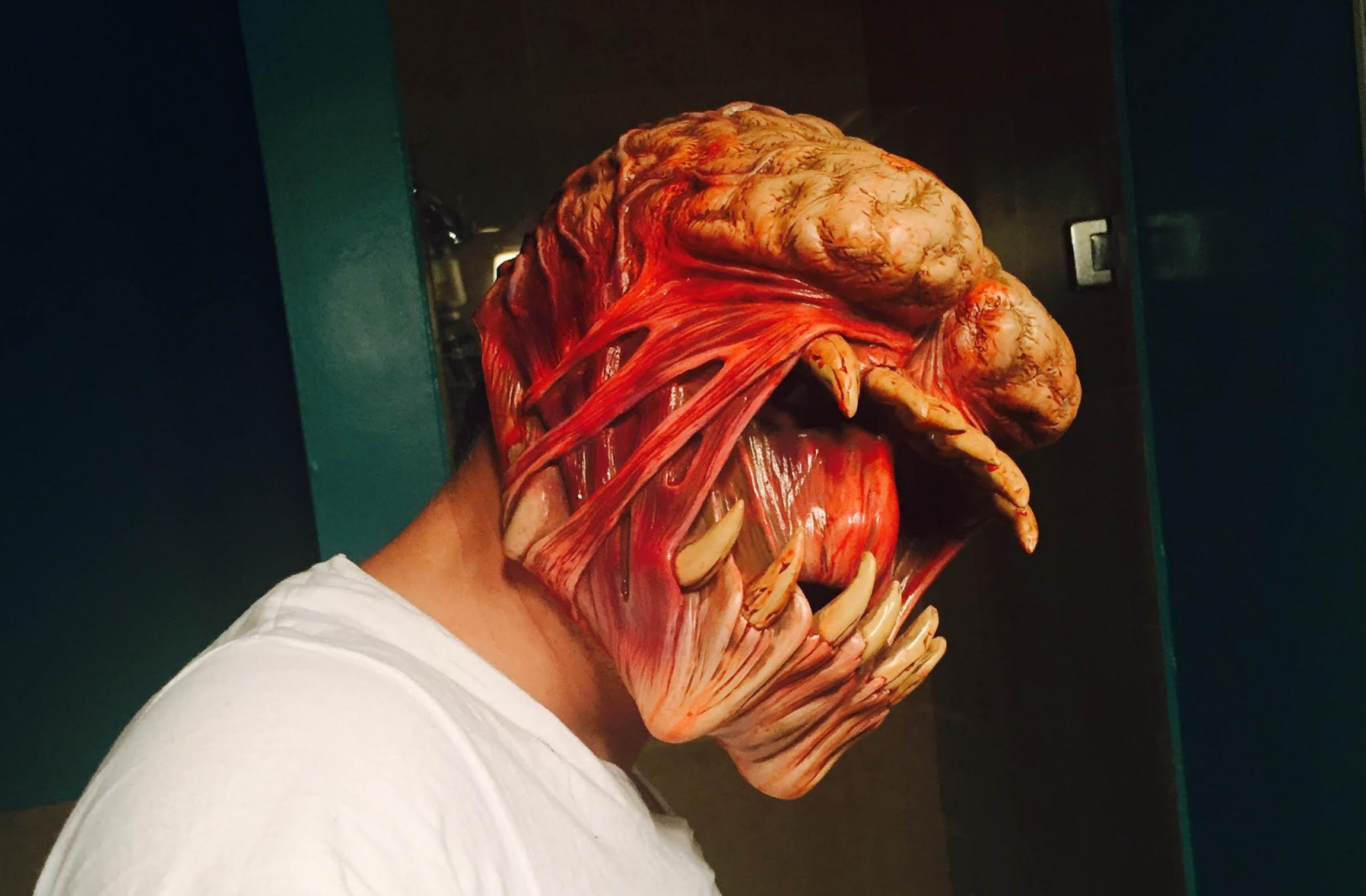 He is not of this world and his face changes all the time. He’s been a gorilla, a Frankenstein, and a hot pink werewolf. So far each of his incarnations have met with some sort of demise, and I’m currently in the process of exposing his new face. The character will start to be a bigger part of the Brain Killer universe very soon in a lot of different ways. He’s not unlike what Jaime Hewlett and Damon Albarn did with the Gorillaz. This is probably the last time I’ll speak of him as a fictional character. Soon, there will be no more me the human – there will only be Brain Killer the subhuman.

What advice do you wish someone would have given you when you were first starting in the art industry?

Why do you make art? What drives you?

I do it because I can’t do anything else. The fear of failure drives me, my kids and their future drives me, my need to get the insanity out of my head drives me. For me it’s not so much drive it’s more instinct. It’s just what I do.