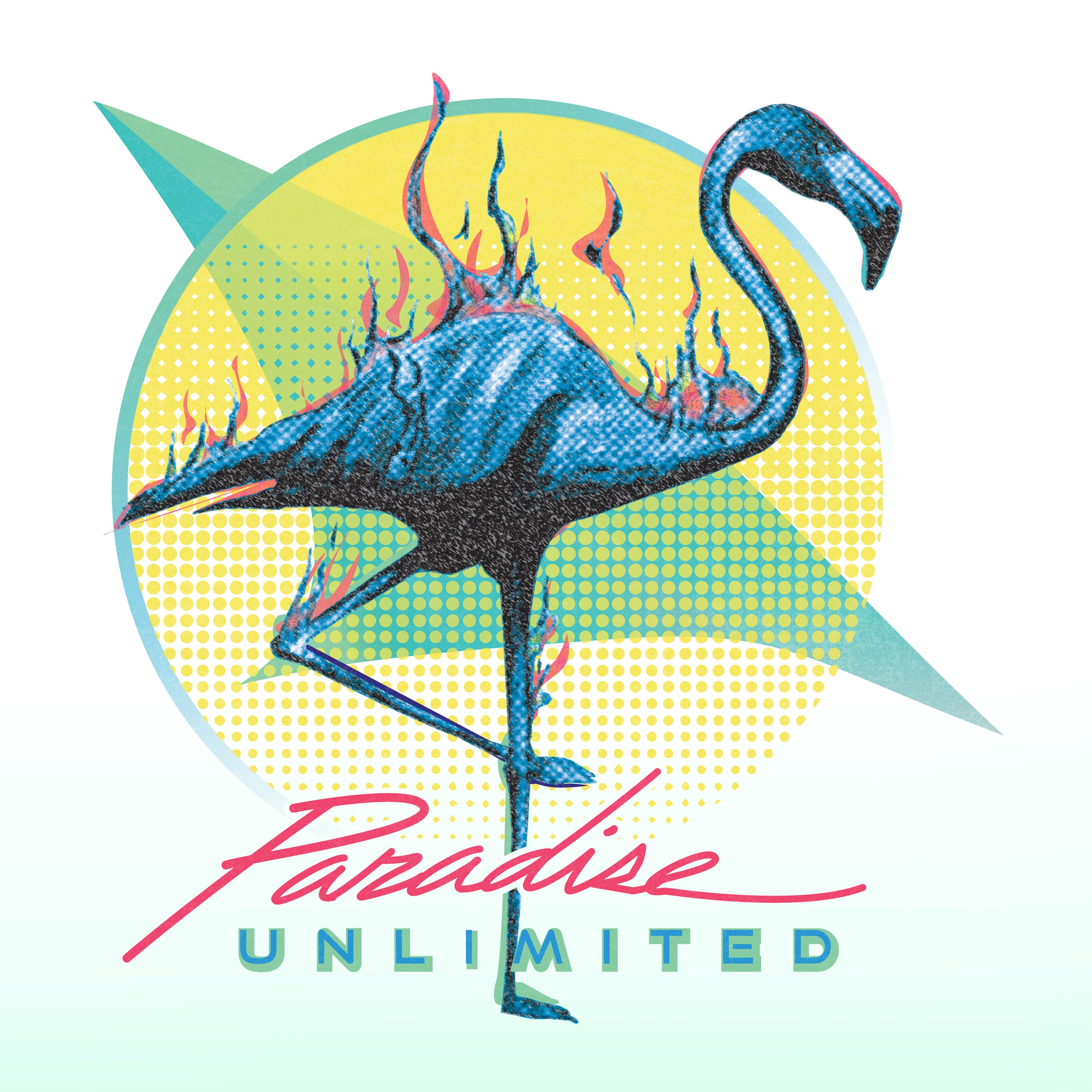 A nostalgic allure influences much of Pablo Marin’s work; elements of ‘90s video game art and electric neons lace their way through his designs, which have been described as “retro futuristic”. Mexico City born yet raised in New Jersey, Pablo, who works under the name Dega Threads, allows the simple, colorful effects of yesterday to shape his reminiscent aesthetic, tapping into his limitless imagination to effectively transport the viewer to days gone by. Recently opening his brand new Threadless Artist Shop, Pablo is driven by the desire is to inject a sense of wonder and magic through his art, and the need to recreate a single moment in the most beautiful way possible. Read on to learn more about Pablo and his work, and check out his Artist Shop here!

Hi, Pablo! Welcome to Artist Shops. Why don’t you tell us a little bit about yourself?

I was born in Mexico City, and came to the US when I was three. I’m 28 now and have lived in New Jersey my whole life, just blocks from the beach, although I’ll be making a move to Texas in mid August. I guess my creative journey began when I was young. I remember winning an art contest in kindergarten, beating out every other five year old in my school. I realized then, if I play my cards right, this little thing I liked to do could be something I get to do. That thought set me on a path of wonder and creativity. I drew all time; playing make-believe was my favorite game. I was also always on my bike; I loved the idea of taking a voyage, knowing it will be different than any other voyage before it, even if it was to one of the same five parks in town. I began to really nurture and value my imagination. I went to college, changed my degree twice, and finally chose to pursue a career in art and design, in the same town I grew up in. I landed a job as lead designer for a print shop, then an apparel company, and then back to the print shop after the clothing company went under. Although, while I was there, I quickly began to develop a brand; something I could channel my work into. I launched Dega Threads in 2013 and at the end of 2014 I quit my day job to launch Dega Studios; a creative brand specializing in graphic art, digital illustration, motion design, and animation.

You refer to your work as “retro-inspired”. What is it about nostalgia that you find so influential?

I’m a product of my generation. I was born in the ‘80s and grew up in the ‘90s. They say you become the things that inspired you as a kid, and there’s a part of me that remembers a time when people weren’t afraid to celebrate life. Things were simple and colorful… for me at least. Someone described my work as “retro futuristic”, although I hadn’t put too much thought into it until I heard it out loud. The idea of “retro futuristic” work takes the viewer to an ambiguous time in space; it’s not quite the future, and it’s not quite the past. Instead, it lingers like a happy dream.

As Don Draper from Mad Men once said, “Nostalgia […] lets us travel the way a child travels – around and around, and back home again, to a place where we know are loved.”

Is there any one thing in particular from your childhood that continues to inspire you the most?

When I think of the happiest times of my youth, I’m a kid, on the beach, in the ‘90s. My shorts are bright orange and a neon logo against it plays tricks with my eyes. I would later find out color vibration is scientific in nature, but back then it was just cool. A lot of my inspiration still comes from memories of those beach days and also from staring at old video game cover art; one image could tell a million stories. You didn’t even have to play the game to get that. My piece Neon Dead is inspired by Sega Genesis and Alpha Tester is obviously homage to Super NES. When I need inspiration I usually revisit this bygone time, if only in my head.

Why do you believe you’ve managed to create for yourself a limitless imagination for work?

I think imaginations are inherently limitless. My work represents a fraction of my reach into inner space. You know, that universe that lives inside your skull? I believe we’re all capable of tapping into its depths; we just have to decide to do it.

Do you ever find yourself with a creative block? If so, how do you get past it?

Actually, Threadless challenges always get me out of a creative slump. It’s like critique day in art school; we are all given the same assignment to come together as peers. Most of my designs were inspired by challenges, actually.

You’ve said you practice lucid dreaming. How did you develop this ability, and in what ways has it affected your creativity?

Ever since I began to nurture my imagination as a kid, I can remember waking up in dreams and thinking, “This is funny, I’m INSIDE a dream?” I eventually found out it was a real thing that people practiced and could get good at. If you start to document your dreams, (as corny as it sounds) they actually get bigger, better, and brighter, lucid or not. Daydreaming has helped me develop this skill as well. If done in moderation, it can make a waiting room fun again; it can make it come alive. Lucid dreaming, which I believe can be learned, has helped me dive deeper into inner space. and allows me to enjoy the experience of things like flight, telekinesis, and even black hole diving (this is a new one even for me!). I guess you can only imagine what I’d like to get onto paper.

What’s your typical inspiration and work process like when coming up with new ideas?

My work process is aimed at capturing a single moment the most beautiful way I know how. Once I decide on a moment, or ‘icon’, it’s usually pretty easy from there. I’ve been inspired by everything from a single song lyric to famous last words. Moments in time are beautiful to me. I feel lucky enough to be able to capture them.

What role does color specifically play in your work?

Obviously I get a ton of inspiration from the neon ‘90s. I like pastels too though; there’s something about recreating a feeling you remember from a beautiful dream. If done right, the correct color pallet can take the viewer anywhere. In my Propulsion Futurismo series, I tried to achieve the same feeling with just one color. Actually, Threadless’s One Color design challenge inspired that entire series.

You wrote in your bio that your aim with art is to “inject your audience with wonder and magic”. Why is this an important goal for you, and how do you work to do so?

I wish to inject you with wonder and show you magic’s been real all along. I say this because it’s important to never neglect your imagination. Fly down the street once in a while; run along telephone wires like you did as a kid in the backseat of a car. Remember though, this is still all coming from the guy who can fly in his dreams and create magic with his hands, just like you see in movies.

You left a full-time job to pursue your art exclusively. What advice do you have for those who want to follow in your footsteps?

Leaving my day job to pursue my own studio at large was just the next step from a lesson I learned as a child. I wasn’t prepared to spend another six months working on someone else’s dream. Life’s too damn short to stay captive in a job that doesn’t tap your full potential. If you’re thinking of doing it yourself, be sure to develop your craft well in advance. Try to build up a small clientele and most importantly, create artwork for which you would like to one day be paid for. Flood your portfolio with fun personal work and eventually you’ll be commissioned for just that sort of work. And of course a side gig never hurts.

If you weren’t an artist, what would you be?

If I weren’t making art, I’d be writing it. I have eleven years worth of astral travels I’d like to share with people. Some fun, some scary, and some beautiful. I don’t think it’s a coincidence I’m able to embark on these voyages with ease as well as being able to visually represent them. Check back with me in a decade, maybe I’ll have a graphic biography out by then, and maybe it will include a disk of animated GIFs to show those moments that simply defy explanation.