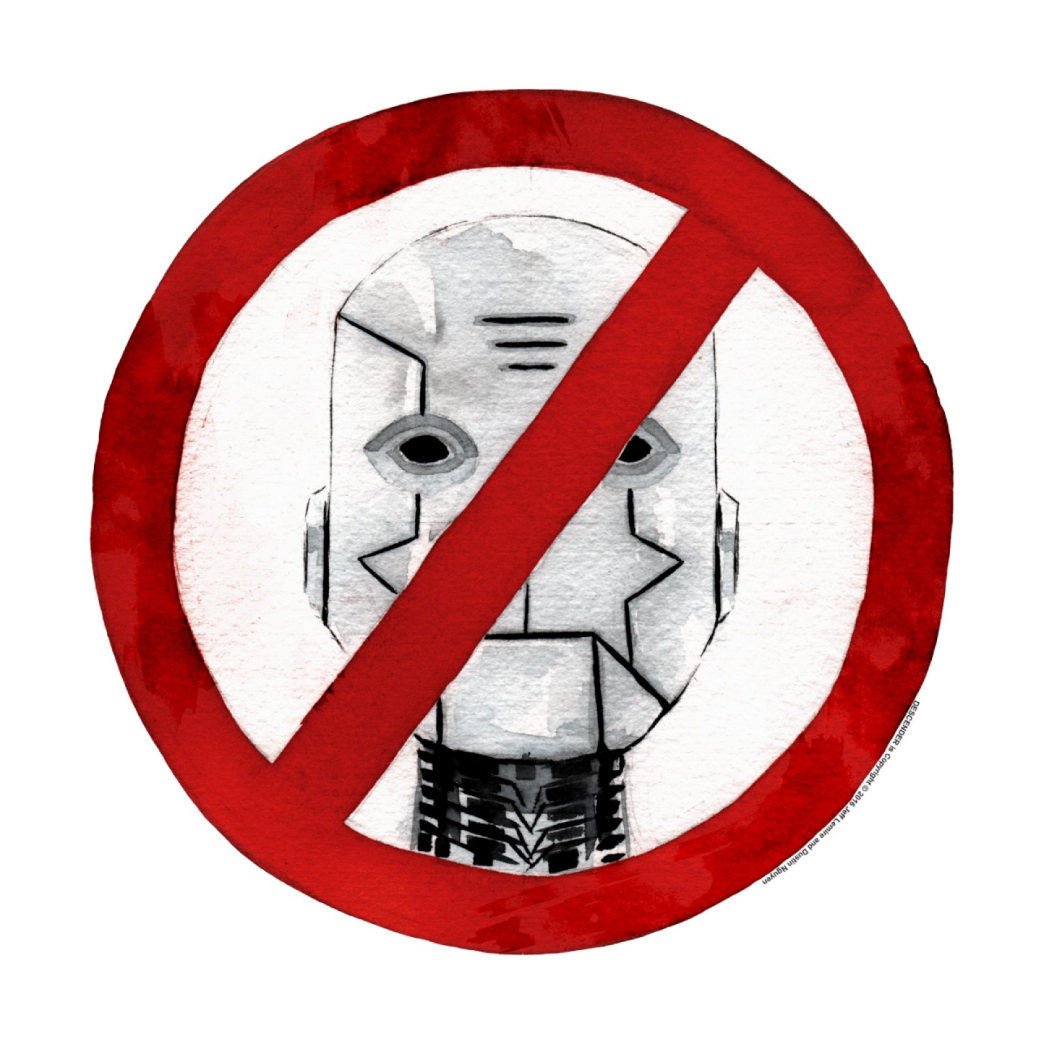 Well comicfolk, it’s Wednesday. And you know what that means (no, we’re not wearing pink) – New Comic Book Day! In honor of this week’s NCBD, we talked to an artist whose Artist Shop we love: meet Dustin Nguyen.

New York Times best-selling comic artist by day, conceptual toy designer by night, Nguyen is a regular Batman of creativity…which might have something to do with the fact that he illustrates a lot – a lot – of Batman comics. He’s illustrated and provided covers for titles including Wildcats v3.0, Batman Beyond, and Supernatural, and has written for and created comics as well, including BATMAN: Lil’ Gotham and Justice League: Generation Lost.

He’s currently spending most of his time illustrating for the Image Comics story he co-created called Descender, which he recently opened up a merch Artist Shop for. His cool watercolors give this sci-fi story about a young robot surviving in a world where androids are outlawed a refreshingly unique look as original as its concept.

We talked to Dustin about Descender, his process in detail, his Artist Shop, and, of course, Batman.

It’s hard to find fresh sci-fi nowadays, and there are things Descender can compared to, but it’s still very much its own thing. Where did the idea for Descender come from? When did you and Jeff Lemire start coming up with it?

Thanks so much. Jeff and I were both wrapping up our exclusive contracts with DC Comics at the time. I was coming out of almost 13 years with the company myself, and we both just wanted to do something we’d both enjoy and own it. That was pretty much the general idea. I don’t think we were aiming at a specific genre, Jeff really just wanted to write a good story and I wanted to draw a good book. It was cool that it ended up being sci-fi.

One thing that sets Descender apart is your use of watercolors. How long does each issue take you to finish illustrating?

Hey, thanks again! Because it’s a monthly book, I have roughly six weeks to go from reading the scripts to finishing the art.

Dang, that’s fast! Why did you choose to give the comic a lighter watercolor look over, say, digital coloring?

At first, it was because I just wanted to paint more. I grew up with guys like Jon Muth and Kent Williams in comics, Heavy Metal Magazine, etc, so it was something I wanted to try at least. Now it’s actually helping me be able to control my schedule better, being able to do all the art myself in one run. Also, I just really suck at digital.

What’s your process for illustrating an issue of Descender?

1) I start by laying out pencil roughs onto the paper (I use a 300lb softpress paper). This is mostly just blobs of people, important gestures, and rough sizing to make sure the story flows. This first step is probably the most exciting and important; it’s the actual storytelling.

2) Once the entire issue is laid out (about 20 pages for your average comic, sometimes we’ll go more for first issues of a new arc – issue one was a 30-pager, I think), I go back and tighten the pencils. This is where I also do clean-up so I can see what I’m going to paint.

4) I go back over the paints, and add in any linework needed. I use anything from colored pencils to pens, inks, brush, quill, etc.

5) Scan into photoshop and do clean up, this is the sucky part. Clean up any dust and dirt.

6) I template the pages to comic book sized files and send off to our letterer Steve Wands who handles it from there with Jeff, putting in the fancy words!

Thank you for breaking that down! What was the conceptual process for coming up with the look of the main character?

I think Jeff and I just said 10-year-old kid, and I drew the 10-year-old kid that came to mind haha. Most artists sort of have a way they draw everyone, like a familiar look. I’m no different, I swear it kind of just looks like my Damian Wayne Robin, or Franklin Richards from Power Pack. It’s Jeff’s words that make [the character] who he is, honestly. The power of dialogue!

I think I’ve always had lots of artist freedom, even at DC with Batman. With Descender it’s just different because everything I draw doesn’t need to follow any pre-existing design. So it’s more just make-it-up-as-you-go rather than freedom. The worst part is over-designing something, then finding out you gotta draw it again on every page.

What other titles have you illustrated for?

Currently, I’m on the second book of Scholastic’s Secret Hero Society (DC superheroes as kids in middle school) with Derek Fridolfs. I’ve also just wrapped up my first children’s story written by my wife when she was 10 (I took an old book she made and redrew it) It’s called WHAT IS IT, and comes out later this month.

Past books are, off the top of my head, Wildcats, American Vampire, Superman/Batman, Justice League Beyond, lots of Batman Beyond stuff and just…lots of Batman.

That’s awesome. You have a ton of flexibility with building a whole new universe for people to experience, which sounds exciting but also daunting! How do you manage to keep away from the influence of other sci-fi stories leaking in?

It’s almost impossible to NOT be influenced by stories and designs from before, I think that’s one of the most difficult things about creating anything today. We all grew up on things we love and they become ingrained in our heads and hearts. Sometimes, you create something you think is totally fresh and new- turns out you were just regurgitating your love for a cartoon you saw in 4th grade and didn’t even know it. It’s tough. I think the best way to go about things is with a style, I guess…it can help differentiate your work from another’s, even if designs and intentions are the same.

Descender is also set to be adapted into a film! Any updates?

We’ve landed a writer last I heard! It’s all very new and exciting for me, but to be honest, I’m racing so fast every month to get the book out that I don’t even have much time to even think about the movie stuff until I’m called into a meeting.

Onto your Artist Shop! It looks like you have a healthy mix of Descender art and original art – what’s the story behind some of the non-Descender designs in there? (Ex. “2012” which I’m totally buying, and “2016,” for example)

Thanks! I’m a huge fan of nautical stories, so 20,000 Leagues and Lovecraft’s White Ship were mixed in there somewhere. Those were also both covers to my sketchbooks from 2012 and 2016.

What made you want to start an Artist Shop?

Haha, it was actually Lance (wearecareful), from Threadless. I’ve always wanted to make some shirts for fun, but I barely have time to sleep with the amount of drawing I have to do, along with my kids. Lance was super patient and kind of held my hand through explaining the files, formats, the choices and stuff to pick on the site. It took me forever to get it up and running, but he was there the whole time to help. Thanks buddy!

Would you recommend other comic book creatives and artists to open an Artist Shop?

I can’t recommend it enough, it’s just a lot of fun and print on demand was always something I wished for when I was starting out in art. If anything, make some shirts for yourself to wear.

It seems like we’re in this weird spot where it’s both a HUGE time for comic books, but we’re almost getting a little burnt out from the superhero craze – would you say that this is paving the way for original comics like Descender to shine?

I’m not sure WHAT it is, but if it’s that, i’ll take it. I’m still 100% into superheroes, but outside of Batman, there wasn’t much else I wanted to draw. For me, working on Descender is like I said in the beginning, just a really fun book I want to do my best on, and own it.

Anything you can leave us with that you’re excited to touch on in upcoming issues of Descender?

With this latest 3rd arc, we’re exploring each of the character’s past and what went down during those 10 years of “blackout” that has made them the way they are today – issue 15 is probably my favorite. It’s the young love/lost sci-fi romance story I’ve always wanted to tell [see above image], and Jeff just let me check that off my list.