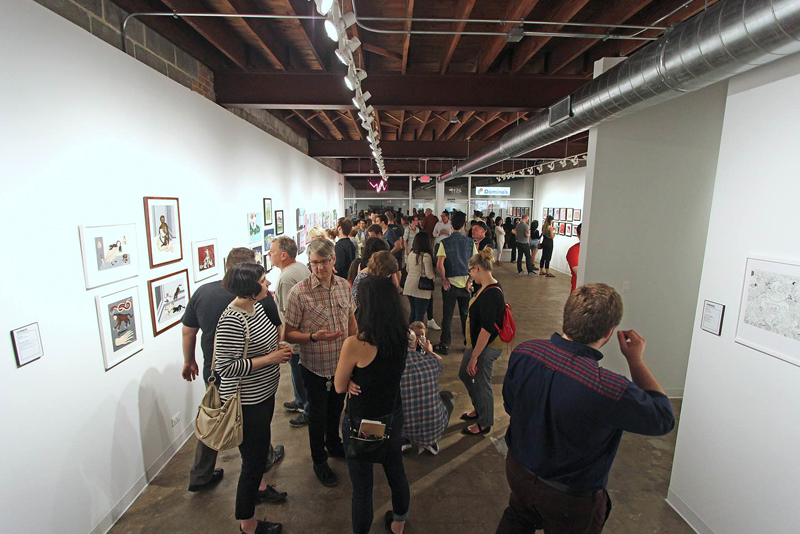 Whether you’re supporting a charity, turning your comics into apparel, or selling your band merch, Artist Shops are for everyone. And Chicago native John Maloof is adding ‘director’ and ‘art space owner’ to the list of creative professionals who own an Artist Shop.

Co-director of the Academy Award-nominated documentary Finding Vivian Maier (alongside Charlie Siskel), Maloof is a man of many trades. And where Finding Vivian Maier displayed a photographer’s incredible work for the world, Maloof is now putting art on display at his recently opened Miishkooki Art Space in Skokie Illinois, which will show the work of famous and unknown artists alike in uniquely curated, cohesive shows. When the space isn’t used as a gallery? It can be used for everything from a place where artists can work on their art to an event space where, for example, a Joan of Arc music video was recently shot by Maloof himself. And we’re super stoked that Maloof also opened an Artist Shop for Miishkooki, which will sell limited run designs that will rotate as the shows do.

We talked to John Maloof about his Artist Shop, his amazing documentary Finding Vivian Maier (if you haven’t seen it yet, do it!), and about the Miishkooki Art Space. Check out the interview below!

First off, and you’ve probably been asked this question a million times – how did YOU discover Vivian Maier?

I grew up selling and buying at Flea Markets, so I got into a lot of different things. I authored a book about the history of the Neighborhood Portage Park and while I was looking for images to illustrate that neighborhood, I went to this auction house and found a box of negatives. They didn’t work for the book, so later on after I finished it, I was trying to decide what to do with them.

You can’t see if they’re good by looking at a box of negatives, so I scanned them in. Over a period of about a year, I learned a lot about photography, became more inspired by it, and became a photographer myself. One thing led to another and I started to realize that this work was better than I originally thought. I started trying to put her archive back together and to put her work out there in a respectful way. It went viral and kind of validated the fact that this WAS better than I thought. Because I didn’t know, I wasn’t a historian of photography or an art critic or anything. So thats kind of how that started.

Its gotta be gratifying that after all of the effort put into it, both your hard work and hers was rewarded with an Academy Award nomination.

Oh yeah for sure. My nose was to the grindstone for several years, so I’m ecstatic that people are responding well to it. This was a monumental task because she left behind a lot of clues but she didn’t leave enough to put her story together. So it was very intense detective style work; the story slowly unraveling about her life. It was definitely the most challenging thing I’ve ever done.

How did you come up with the idea to start the Miishkooki Art Space?

It was an organic unraveling of trying to figure out the next major project in my life. I grew up as an artist, and I never went to an art school to study art. So I wanted to open up an art space in a not-for-profit fashion so I can show art that I like.

I got the idea last winter to look for a space that was big enough to work on projects, like a giant studio space that I can hold art events at.

So people can work on stuff here and we can also show art. The space was so big and so affordable, I thought we could do some pretty interesting stuff here and not be bound by being in a small city space with high rent.

The place kind of blossomed into a really cool looking venue, even more than I anticipated so that was kind of driving my excitement for gathering bigger shows here. I shot a music video for Joan of Arc while the building was kind of under renovation, we’re working on having a mural on the side of the building, so that’s all exciting. And I’m already working on some really exciting shows that I think people from all over the area would enjoy.

What made you want to start an Artist Shop for the space!

Threadless is kind of a Chicago staple artist apparel company. And I thought, since a lot of the artists in the show are illustrators who do a lot of different things with their art like commercial things for publications, magazines, newspapers, their own comics comics, etc., it might be cool to take some of these artists who kind of already use pieces of their art as graphics or illustrations and offer a piece of that as an art shirt, to just offer for the duration of each show.

What’s the mission of the art space? Why ‘art space’ and not a gallery?

This isn’t a traditional gallery; I want to offer work that wouldn’t be pressured by sales. So that’s my incentive: to do a space that can offer the public work that is different or that maybe no everyone would want next to their couch. And that’s fine! That’s the approach here. To just show what’s good and not necessarily just looking at the bottom line.

What’s the current – and very first – show you have going on at Miishkooki?

The first show is called “Sweet Spoils”. We worked kind of all summer to find the absolute most tight knit cohesive theme for our first show.

There are 95 pieces up right now by 16 artists; 11 of them are from other countries, and 4 are local artists from Chicago. It includes internationally famous artists such as Joan Cornellà (right), well-known local artists like Nate Otto, and also people who are kind of just out of school and some that are just complete outliers that are just artists in their own studios. So there’s a wide range of experience in the work here, but I was looking for that range intentionally to find a spectrum of different art that’s not necessarily all famous or all emerging; I wanted to keep it eclectic.

Will all the shows all have a main theme?

In this show, there’s an overall theme of figurative work that involves some comic inspired aspects, illustrations, surreal aspects, and by in large, they’re very playful and colorful, humorous, and some of them are a little dark. It’s a very fun show, so I think that this kind of runs the gamut of the type of work we tend to do more of here. It was a lot of work to curate this and put this together but I think the cohesive curation of it is pretty tight. So that’s kind of what I would like to do more of. Less shows per year, but more of a kind of planned well curated group of artists per show. It’ll take longer to make these shows so thats kind of why I don’t want to be driven by money. Because I don’t want to be worried about how many shows I can possibly do per year. I want to do as many as kind of happen. And there are other things I want to do with the space. The back is a studio area where artists can work on residencies, we can have events or film screenings, so we have some nice options.

Who are some of YOUR favorite artists?

As far as my favorite artist here, I honestly the show took so long to curate because I REALLY like the work of every artist here. Like…personally would really like to buy their work. But I can’t do that. So, there are a lot of artists here that I was either a fan of prior to the show or I discovered and absolutely loved what they were doing.

Regarding my own art, I have a lot of influences I’d say. Im inspired by the memphis movement designers from the early ‘80s, I’m inspired by a lot of graphic design from the ’80s and also other contemporary artists today that are using different aspects of nostalgic computer graphics to influence their painting. That’s kind of like where I would say my painting influence has come from.