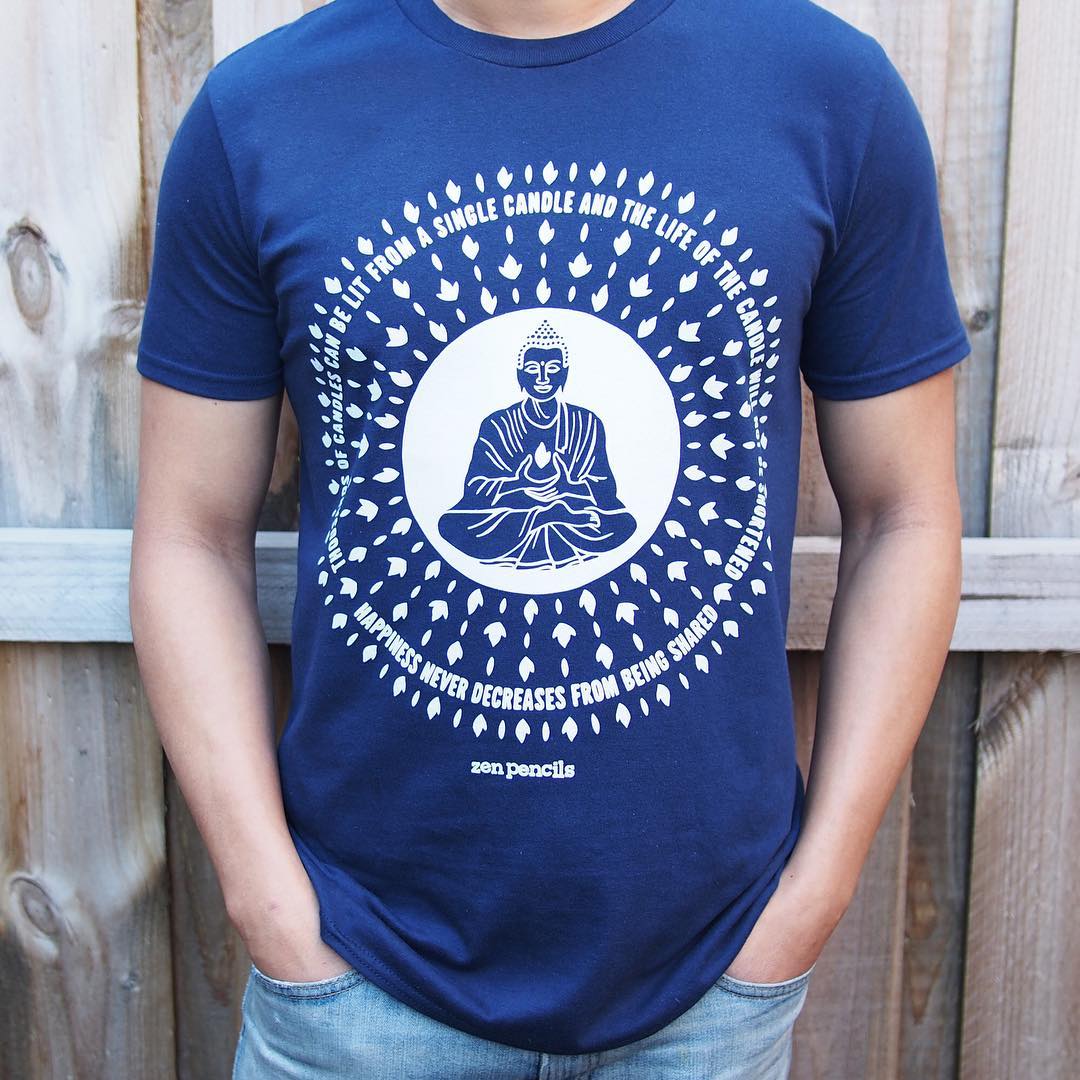 “…No better school exists [for the writer] than graphic representation, with its striving for vivacity, accuracy, and economy.”

Inspirational quotes by inspirational people can be incredibly powerful. So why should they exist merely as words on paper and phrases floating through our minds?

That’s where Zen Pencils comes in. Zen Pencils mastermind Gavin Aung Than gives quotes we love and quotes we want to know more about new life by translating them into comic strips. Gavin spent spare time cartooning as a way to kill boredom while he was working a corporate graphic design job. In a move as inspiring as the quotes he illustrates, he quit his day job to pursue cartooning full time, with huge success. And recently, not only is he turning quotes into art – he’s turning his art into apparel in his Threadless Artist Shop.

We talked to Gavin about his gutsy decision to go freelance, about his art, and about his brand new apparel shop. Check out what he had to say below!

How did you get started doing “Zen Pencils”? How did you know you were onto something cool?

I’d always dreamed of being a cartoonist and I spent years working a crappy corporate design job while working on comic strips in my spare time. I’d had a number of failed attempts at trying to get a webcomic off the ground and was kind of having an existential crisis that it
would never happen. So I was reading biographies and following the journeys of lots of creative heroes and had some of my favourite quotes of theirs saved. Eventually, the idea struck of combining these quotes with my cartooning to create a new webcomic.

I knew I was onto something cool when one of the early comics, the Carl Sagan quote (below), got a bit of attention online and I knew that the website might just work.

What’s been your favorite quote to illustrate?

It’s hard to single out one. Some of my favourites are the quotes from my heroes like Bill Watterson, Neil Gaiman and Jack Kirby. Also the poem adaptations of Ithaka and All The World’s A Stage have a special place in my heart.

You quit your day job to pursue illustration…that’s kind of the dream! What was making that decision like?

Terrifying! I had been really miserable at my job for a couple of years and like I said, was having a bit of an existential crisis about what to do and was trying to figure out how to make a living drawing comics. Once I came up with the idea for Zen Pencils, I eventually just said ‘screw it,’ resigned, and launched the webcomic within a few months. I sold my house to cover expenses and gave myself six months to make it work. It was the dumbest and smartest move I’ve ever made!

I always name Teddy Roosevelt’s Man in the Arena quote (below) as my favourite, and it was one of the first quotes I adapted.

In creating comics out of inspirational quotes, you’ve become an inspiration to others yourself – how does that feel?

That was definitely not the plan! It feels really weird and I never set out to be an ‘inspiration’. If my comics and circumstances help someone pursue their passion, then there’s really no greater compliment, right? I’m honoured and humbled, but still…it’s weird.

What made you decide to open an Artist Shop!

I had been experimenting with print-on-demand t-shirts for awhile and was never really satisfied with them. I had been a Threadless customer for years so when I heard about Artist Shops, it was a no-brainer.

How did you decide what designs to put on apparel (especially when dealing with multi-panel comics or comic characters)? The selection is great!

Yeah it’s a bit tricky to reproduce a full multi-panel comic as a t-shirt, so I just picked some of my most popular characters mixed with some short quotes and typography. I’m still experimenting to see what works best on a t-shirt.

I saw you have a bunch of information about your process on your site, so I won’t make you re-state all of that! But how did you develop your style and technique?

Basically through years of trial and error. Like most people, I started by copying my favourite artists and my style evolved over the years to be a combination of my heroes until eventually my own style emerged. I get asked this question a lot, and there’s really no equation to develop your style, just let it happen organically over a long, long period of practice and mistakes.

Who are some of your favorite comic artists?

What’s the most challenging part of your job?

All my comics are self-contained little stories, so constantly trying to think of new ideas, characters, and scenarios can get a bit exhausting. Still, I love the challenge and it feels great to always think of creative ways to adapt a quote.

Do you have an inspirational quote for aspiring artists?

Some helpful quotes for the inspiring artist are my adaptations of an Ira Glass (see right) and Jack Kirby quote.

Would you recommend Artist Shops to other illustrators?

Sure, there’s really no risk at all for the artist. No start-up costs and the backend is really easy to use. Print-on-demand services have really helped online artists like myself and allow me to focus more on the work and less on being an administrator worrying about orders, shipping and all the boring stuff!

What advice do you have for other artists who are looking to break out of their corporate design jobs, or day jobs in general, and want to do something more creative?

Advice is tricky, because what worked for me might not work for others. All I can say is that if you’re looking to break out on your own and be a successful freelancer or creative entrepreneur, it’s going to be really, really, really difficult. You’re going to have to work harder than you ever have and constantly hustle and sell yourself. You most likely won’t make much money in the first few years, if at all, and your stress and anxiety levels will skyrocket. If this STILL sounds appealing to you, then go for it, because the rewards of being your own boss and being fulfilled creatively make it all worth it.