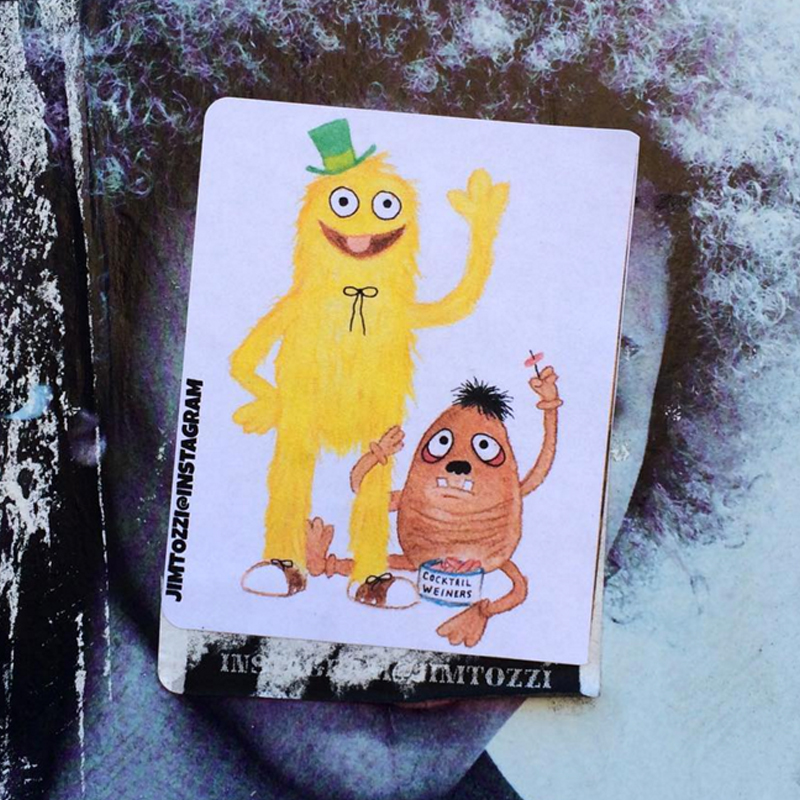 If you weren’t a kid in the early 2000s, you may have watched the definitely-not-for-kids “children’s show,” Wondershowzen on MTV. Wondershowzen was a hilariously disturbing play on kids shows, something between nihilistic Sesame Street and Avenue Q before the adult puppet musical was a thing. It was beyond experimental, and was its own brand of comedic genius.

There’s an art to charmingly and addictively weird art, and Jim Tozzi – who designed the puppets and animated for Wondershowzen – is one of the masters. We’re stoked that he now has an Artist Shop full of, as he puts it, “t-shirts you’d find if some weirdo stole all your favorite t-shirts from under your bed, and then threw that suitcase into the East River, then two years later you find them at some obscure yard sale in Nyack.”

We talked to Jim about his work on Wondershowzen and at Adult Swim, his Artist Shop, and what he’s doing now. Check it out!

Between your art, directing, and work in animation, you’re kind of a jack of all creative trades – at heart, what work do you most love to do?

I love to do all of those things…when I’m doing them, but I’d say making art/ drawing and painting, is the only the thing I’m biologically compelled to do. Really, the pleasure for me comes in the process of making, when you can be lost in a project and time takes on a different quality, you feel that ethereal beam of inspiration. That’s what I enjoy most, whether it’s directing a project or making art. With directing you’re always trying to strike a balance between your vision and what the client wants. When it works it’s great, but that’s not always the case. There are compromises and it’s kind of a game you have to play…in the end you just hope everyone gets what they want.

With art it’s always a solitary endeavor, but you’re still challenging yourself – hopefully – and that’s its own game. Whether it’s directing, painting, or animation it’s all about discovering something new, those little unsuspecting
surprises that make you go “where the hell did that come from?” and you fall in love with it and it’s beautiful.

What are three words that best describe your art?

You paint everything from adorable owls, to giant furry creatures stepping on horses, to naked clowns – what/who inspires you and your style?

What shows/movies inspired you growing up?

How did you curate which designs to put in your Artist Shop?

Firstly, I try to imagine if I would actually wear a t-shirt with this particular image. Then I’d use my Instagram to get feedback as to what people are responding to.

I want my collection to feel like these are the t-shirts you’d find if some weirdo stole all your favorite t-shirts from under your bed, stuffed them into a suitcase and then threw that suitcase into the East River, then two years later you find them at some obscure yard sale in Nyack.

What made you want to open an Artist Shop? Have you sold your work on apparel before?

I had been doing my own silk screens, mainly of the original Wondershowzen and Xavier Renegade Angel shirts I created. I wanted to reach more people though, so Threadless has been a really great way to offer much more than I could making t-shirts on my own, plus the color and style options a great thing!

I see you have a few designs featuring some Wondershowzen characters – what was your experience like working on the show?

I was one of the original members of PFFR, we started as a band with me, John Lee, Alyson Levy, and Vernon Chatman. John and Vernon had been working on the pilot for Wondershowzen (the show was originally called Kids Show but MTV got scared thinking that kids would actually watch it!) and I helped out with the animation and puppet designs.

After that we created Xavier Renegade Angel which was based on a character in one of my paintings. It was great working with those guys; John and Vernon are comic geniuses and we had a lot of laughs.

Adult Swim was great, they originally wanted to do a third season of WonderShowzen but at the time they were leaning more toward animated shows, so when we presented Xavier they just threw us some money and said go do it, live a little.

You mentioned your art collective, PFFR: tell us a little about that! How did that get started? What’s a quintessential piece of art/work that’s come out of it?

Well, I’m essentially retired from PFFR, but we basically flamed out as a noise/electronica band back in the late ’90s. John was really the only real musician, I played some bass, Vernon played guitar, and Alyson keyboards and drums. Together we made a lot of annoying sounds and we made like three records, which you can occasionally find in the free/discount bins at the now defunct Tower Records.

For me the quintessential piece would probably be the PFFR logo we created, it was an exquisite corpse that we all contributed to and you can see it birthed after every PFFR production.

What’s been your favorite show or project to ever work on?

Wondershowzen really was my favorite, one of those rare times where you get paid to do pretty much everything you absolutely love. It was like being Charlie in the chocolate factory except there wasn’t as much chocolate and the kids were uglier.

Anything you’re currently stoked about?

Yes: making art, doing low-level graffiti crimes, and working on a live action show for a band called PANTS coming out in February 2017.