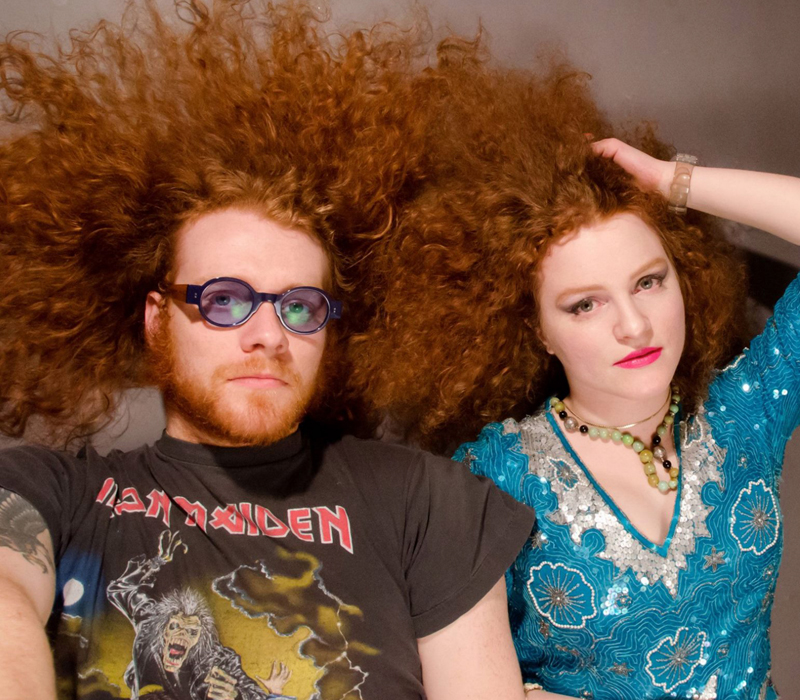 If you read “White Mystery” and thought, “like the airhead flavor?” you’re totally right. The Chicago rock band White Mystery took their name when they started in 2008 after half of the duo, Alex White, found one of the infamous Airhead wrappers on the ground. The name, “White Mystery: Out of Control” inspired her, and the rest is history.

It’s a fitting title. With their psychedelic appearance meets a garage rock ‘n’ roll sound reminiscent of performers from Courtney Barnett to even ’60s rockers like The Beach Boys in songs like “San Francisco Dreams,” you’re not quite sure what you’re getting when you first encounter White Mystery. But once you try ’em out, you’re hooked.

We talked to this redheaded duo about their music, what it’s like running every aspect of the band themselves, and about their new Threadless Artist Shop. Check out what they had to say (and their rad sound.)

Tell me a little bit about the name “White Mystery.” What inspired it?

On April 20th, 2008 Alex White found a shiny silver Airheads wrapper on the ground that said, “White Mystery: Out of Control.” The rest is history.

White Mystery – and Alex, you as a guitarist – has been called “the most DIY band ever.” Tell me about this aspect of the band! What’s it like being Jacks of all trades and doing everything yourselves?

As an independent band, our successes and failures are entirely our own, which makes White Mystery responsible for White Mystery.

What does a typical day look like for you two?

Alex White wakes up early and answers hundreds of emails (contact her here), Francis wakes up late and plays video games, then at night we play a show and go party after.

That sounds rad. How long has White Mystery been around? How did it start?

Alex, you graduated with a business degree – did you always want to do music first?

Starting a record label in high school inspired the decision to pursue entrepreneurship at DePaul University, in order to make the union of music
and business as beautiful as possible.

That makes sense! So what’s your philosophy in creating music?

Go where no band has gone before!

What’s it like being in a band together as siblings? Is that ever hard to separate when you have disagreements or are you guys pretty cohesive?

Alex and Francis are blessed to have each other as siblings and, we stick together through thick and thin and always support one another.

Is the song “Dubble Dragon” about you two?

What are some groups that inspire you?

What made you decide to open an Artist Shop?

The Threadless Artist Shop is an amazing opportunity to offer custom variety to White Mystery fans, who can choose what shirts, designs, and colors best represent their unique styles.

Would you recommend Artist Shops to fellow bands? How has it helped?

Yes, the Threadless Artist Shop is a cool option for bands who want to print shirts for their fans on demand! This way, people can choose whatever size or type of shirt they want without the band worrying about their inventory.

Anything you’re currently stoked about?

What advice do you have for aspiring artists, both in music and other creative fields?