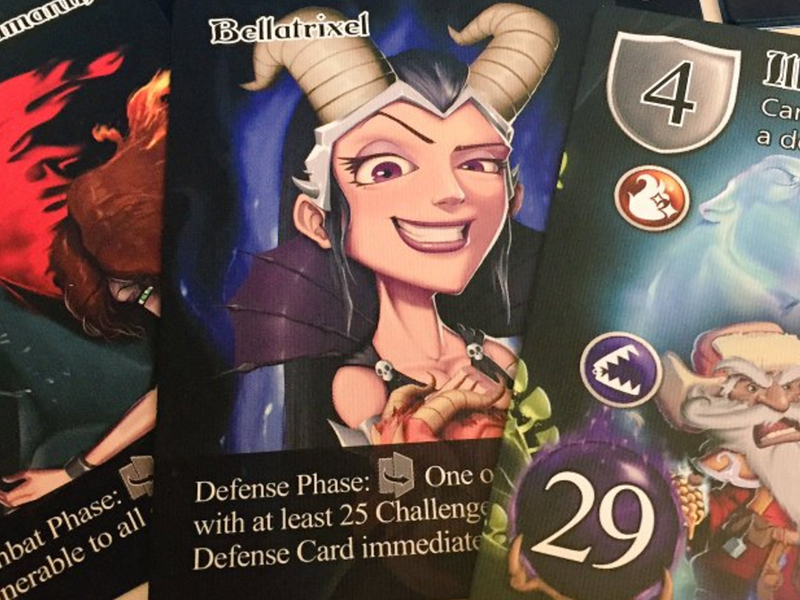 Whether you’re playing Overwatch with friends or playing a solo game then talking about it with friends, gaming brings people together.

But just like “geek” is no longer synonymous with “uncool” anymore, “gamer” doesn’t necessarily mean just someone who plays video games. And Nevermore Games‘ goal is to bring people together around a table IRL for good times with their card and board games. This indie game publisher may just be six years old, but it already boasts five completed games with two more on the (very near) horizon.

We talked to Nevermore’s co-founder Bryan Fischer about the indie gaming world, the Nevermore Artist Shop featuring apparel inspired by their games, and chickens! We talked to them a lot about chickens.

How did Nevermore Games get its start? How has the company changed since it started in 2010?

When we started in 2010 we had a single game and a broad vision for what we wanted to do. We wanted to design and publish a bunch of games we had ideas for. We wanted to tackle cardboard and digital and everything else on the planet.

What’s been your most successful game so far? How about your favorite game to work on?

We use crowdfunding to bring our games to market. Our most successful crowdfunding campaign to date has been for Dark Dealings, which comes out this summer. It also happens to be my favorite game to work on, too. We were able to find an amazing artist to help bring the vision to life and working with such great game designers is something that makes the process super fun.

I was trying to design a political meta-game kind of thing at the time, something where players were encouraged to be mean to one another; to strike deals and break alliances. While talking through the game with my wife in the car, she saw a billboard displaying a chicken caesar wrap and jokingly said, “you should make a game called Chicken Caesar” and it was born. And yes, we’ve heard a hundred different puns. They never get old when they are about your game.

Do you both design games and help publish games? How many of each have you done?

Yes! I’ve designed two published games – Chicken Caesar (with a co-designer, John Sizemore), and Pie Factory (published by Dice Hate Me Games). I’ve done the art and/or graphic design on at least 10 titles and more to come out this year and next. I’ve also produced/published three games with two more coming this year. I stay busy!

The industry is growing and it’s certainly a good time to be involved. Crowdfunding has been a huge part of the meteoric rise of indie publishers like ourselves. Historically, Americans stop playing board games (other than party games) in their teens, most of Europe and elsewhere have had a vibrant culture of board gaming well into adulthood. Thankfully, it’s started to catch on here because these games are awesome and they facilitate great memories for friends and families.

Has this rise of the independent gaming world been a benefit or has it made breaking through a bit tougher?

Up to this point it’s been a big benefit. We’re in a bit of a bubble at the moment. Instead of trying to get games published, a lot of people with game ideas are just publishing themselves. We all started out this way, but it’s causing a lot of good games and creative people to get left in the dust. Eventually, the growing bubble of one-title-publishers will pop.

Who does your art!

What made you decide to open an Artist Shop? Is having apparel to go along with your games something you would recommend to other game designers?

It’s really about celebrating board gaming culture! It’s a unique one that is only now being embraced by geeks at large, so we have a lot to be excited about. If we can help people feel proud to game, then we’ll do just that. On top of that, board games are art and it’s important to recognize that and celebrate the uniqueness of it.

I don’t think it’s worth it to just throw a game cover on a t-shirt. It’s important instead to adapt your artwork to the space and create messages that resonate on a very personal level (or at least make them funny). It’s not something everyone needs to do, but everyone should own at least one shirt ;)

What games are you currently working on?

We’re hard at work on Spires – a card game coming out late this Summer. It’s designed by an award-winning designer, T.C. Petty III, and it’s a quick-to-learn difficult-to-master type of game. I’m doing the artwork for it and I’m very excited to say it’s been well received thus far.

What was your favorite game growing up? When did you start making your own?

My favorite game was always Magic: The Gathering. I still play it semi-regularly because I just can’t stop. That said, I also grew up with Dungeons & Dragons and a bunch of ’80s and ’90s fantasy board games. Eventually I discovered eurogames – games with less emphasis on theme and more on strategy. It was around this time I started to design games myself (2001 or so).

What’s your favorite part of the job?

My favorite part of the job is talking about our games and the artwork. I’m a creator by heart, so being able to talk about what we’ve created with people is #1 on my faves list.