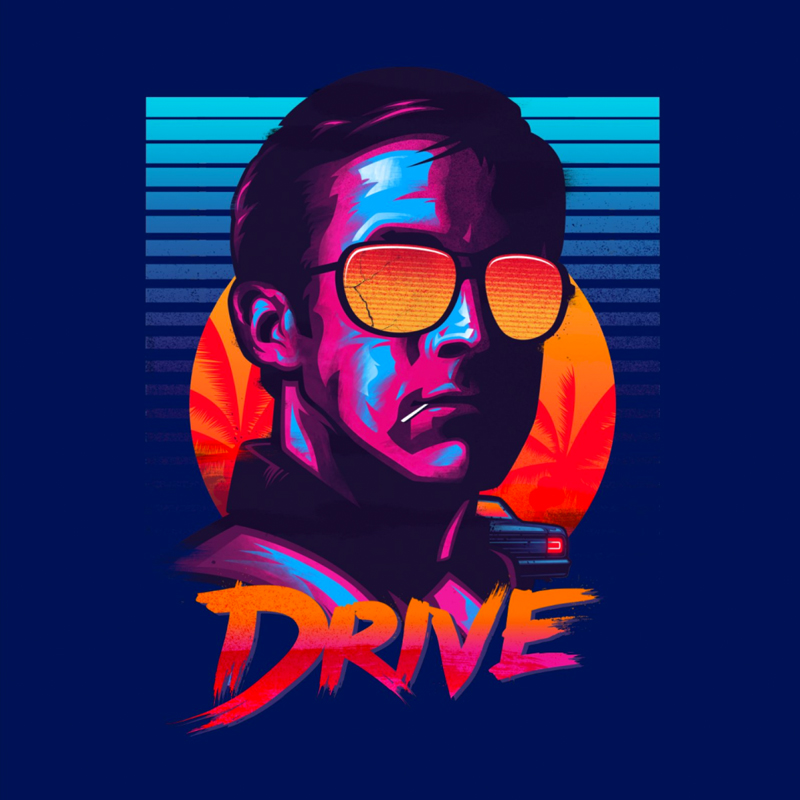 There’s something about the ’80s that’s extra nostalgic. Even those who weren’t born yet in the ’80s now long for the big haired, shoulder padded days of yore. From Stranger Things to the 30th anniversary celebrations of Back to the Future and Ferris Bueller’s Day Off, it seems that all 2000s want lately is to re-live everyone’s favorite decade. But few can capture the neon-streaked look of the ’80s as well as James “Signalnoise” White.

This Canadian designer’s art would fit right in with a lineup of Journey or Asia’s album covers in their heyday. His art captures synth-y vibes so well that an image he created just for fun of Ryan Gosling in the ’80s-esque neo-noir DRIVE ended up being made into an official product for the movie. And we’re super stoked that it’s one of many of the designs in his Artist Shop!

We talked to James about the synth-y style that fills his Shop, the ’80s films and shows that most inspire him, and about how that rad DRIVE deal came about. Check out the interview below!

How did you get your start in art?

I’ve been drawing since the age of 4, ever since I could hold a pencil. My parents couldn’t keep the nice typewriter paper in the house because I’d find it and draw on it all. I had a great imagination when I was a kid (we all do), so I loved the idea of creating something from nothing.

Creating my own little worlds. My childhood best friend Mike was the same way, so we would create our own wrestlers and have them fight, invent our own comic books, etc. The ’80s was a great time to be a kid as well, so I’d always draw my favourite cartoon characters like the Ninja Turtles, Batman, Transformers and other stuff. I’m still that kid, really.

How did you develop your unique style? What most inspired (and inspires) you?

I was a child of the ’80s, which was the best time to be a kid. We had all the best stuff…tv shows, movies, toys, and I was into all of it. When I wasn’t playing with my toys or watching cartoons, I was drawing the main characters. The style I work in today is heavily steeped in ’80s nostalgia, so when you see lasers, chrome text, rainbows, brush letters, it all comes from stuff I was into when I was a kid. Everything was so colourful and awesome back then, so I just want to recreate that feeling in my work.

Where does the name “Signalnoise” come from?

In the late ’90s, I was trying to come up with a domain name for my first website. I went through all kinds of pretentious names (‘Euphoria’ was one I remember) but none of them really sounded right. One day I brought my favourite graphic novel into work, it was written by Neil Gaiman and drawn by Dave McKean, called Signal to Noise. When I threw my pencil case on the book it landed on the word ‘to’. Combining the words ‘Signalnoise’ struck a chord with me, so it became my domain name and eventually my studio name.

Lets do some lists!

Speaking of ’80s vibes, your DRIVE art was made official art for the movie – what was that like? How did that come about?

I was hanging with my buddy Jason Eisener (Hobo with a Shotgun director) one evening and he strongly
recommended the movie to me. After watching it the night after, I knew straight away I wanted to make some sort of tribute poster for the film, as the official posters were super boring.

So I finished my DRIVE poster and posted it to my website and Twitter. It got major buzz and was spread around the web considerably, and as a result my agent, Alex Suchet at Mystery Box, inked a deal with FilmDistrict to make the poster an official DRIVE product. We were then able to do a limited edition run, which sold out in a couple of hours. Needless to say, it was very exciting.

Your Artist Shop is rad! How did you pick which designs to put in it?

With great difficulty! I’ve been a professional designer since 1998 and have been running the Signalnoise Studio since 2007, so I have a huge backlog of personal artwork. Over the last 7 years I’ve been focusing almost solely on the ’80s and synthwave vibe, so I’m selecting art that accentuates the style and hopefully appeals to that audience. I love synthwave music, and want to provide shirts for fans of the scene to wear to gigs.

What made you sign up for an Artist Shop? Have you featured your art on
apparel before?

In 2010, I tried to jumpstart offering apparel through my Signalnoise brand. Much like my friend Johnny Cupcakes, I did several designs featuring my logo in different styles, and playing off of stuff I was into as a kid.

In the end, it was a flop. I ended up with loads of shirts I couldn’t sell and spent endless hours packing and shipping orders. On top of that, the shirts were screen printed, which brought colour limitation. Something I don’t enjoy.

So when Threadless announced Artist Shops I was very excited, as it remedied all of the issues I listed above. I don’t require my own stock, I don’t lose time shipping, and I can use as many colours as I want. It’s a perfect solution for me, and my audience has been loving it.

Would you recommend Artist Shops to other artists?

Absolutely. It does require your own promotion through social media, but that’s something I enjoy about it. Artists who have an audience already and have wanted to experiment with apparel designs should really look into the service. It’s perfect for independent artists, such as myself.

What project have you gotten most excited about recently?

Last year I was hired as a consulting art director on the Ubisoft/RedLynx game Trials of the Blood Dragon. Where I was originally hired to design the key art and game logo, it flourished into my working with the team at RedLynx on the overall direction and design of the game. They had me designing atmosphere art for each level, key art for the stages, even in-game posters that appear on walls. The entire game was drenched in a neon ’90s aesthetic, so I had an absolute blast creating loads of art for the game. And the team at RedLynx pushed me and my process to be better. It was a such a great time.

You have a podcast too! When did that start? What kinds of things do you talk about on it?

I do, but haven’t done a new episode in over a year. I do a lot of public speaking at design and arts events around the world, which is all about my work, fun stories, dumb jokes, and some rock ‘n’ roll. I wanted the podcast to be a companion piece to my stage show, but telling the other side of the story. Being an independent designer is never easy, and we all go through similar ups and downs as we try to find out way. So the podcast is more of a downer, and I was telling those stories at a low-point in my life. The episodes really resonated with designers, who assumed if you’ve made a name for yourself that things are somehow easier. It certainly isn’t.

You’ve done a number of speaking events like you mentioned – what’s the biggest piece of advice you like to offer audience members?

Make as many things as you can. The only way to get better at your craft is to do it as often as you can. Going to the gym once is not going to get you ripped, you have to work out often to slowly see results. It’s the same for art. Every single thing an artist creates makes them slightly better than before. Keep pounding. Never stop.