Long before George Lucas, Gene Roddenberry and Steven Spielberg, the true pioneers of Science Fiction created a whole new genre. Authors and illustrators like Jules Verne, H.G. Wells, Ray Bradbury, and Robert Heinlein told stories and created art that foretold the possibilities of a world yet to come.

Their vision of the future comes to life in The Science Fiction Art Anthology, a definitive collection of illustrations from 1910 to 1970. Thanks to Forry J. Ackerman and others, this historic compilation of classic sci-fi art is now available on on tees, phone cases and wall art. Chris McCartney, curator, along with Pablo Marin of Dega Studios, has issued the first 10 pieces from this treasure trove. We talked to Chris, who introduced us to the collection.

This artwork is from a much larger collection which once belonged to the late Forrest J. Ackerman. Could you tell us a little about Forry?

Forry was a great guy. He was like the gatekeeper for all of science fiction and horror. He, Ray Bradbury, and Ray Harryhausen are the ones that started the first science-fiction club in Los Angeles in 1939.

Forry’s house, located in the Hollywood Hills, was probably the largest Collection of sci-fi art and memorabilia in California. There’s a great video of this amazing “Ackermansion” on YouTube, where you can see a little bit of his art, props, and costumes.

How did you first meet Forry?

Back when I was a producer for HBO and Showtime we did a documentary film now known as the The Sci-Fi Pioneers. It was a 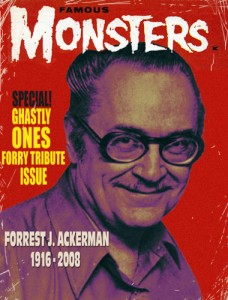 great film about Forry, Bradbury,  and Harryhausen. It recounted how they got together in 1939 and became the biggest forces in science fiction and horror. In the film we have some of Hollywood’s best directors including John Landis and Frank Darabont. We talked to the original creators of modern-day special-effects Dennis Murren (of ILM) and Phil Tippit—even NASA scientists—who all say if it wasn’t for those three guys, they would not have dreamt of doing the things that they are doing today.

And that led to acquiring the collection?

During that time, my company, NightmareMobile, approached Forry about acquiring the rights to his fantastic sci-fi art collection. Since then we have done over 5 million downloads of the art for mobile phones, domestically and internationally. It was a huge success with thousands of fans around the globe.

We’ve heard Forrest Ackerman coined the term ‘sci-fi’ back in the 1930s. Is that true?

That’s a great story. One day Forry was riding in his car and he heard an ad for stereo “HI-Fi”. The first thing that came into his mind was the term “SCI-FI”. For the rest of his life that was his license plate in California!

Who were some of the artists behind these amazing works? And for whom were they originally commissioned?

Oh boy. There are so many, like Anton Brzezinski, A. Nuetzell, Dick Calkins, and F.R. Paul. However, all of these original pieces were commissioned by Forry from the originals.

Why do you think this collection is so important in preserving the history of science fiction?

The collection dates from about 1910 to about 1970. This is the art that started it all! Many of these pieces were the original art for such books as War of the Worlds, Time Machine, and many others. Also such great science fiction magazines as Amazing Stories, Weird Tales, Authentic Sci-Fi, and Famous Monsters.

Before there was Star Wars, Aliens, Star Trek, George Lucas, James Cameron, and Gene Roddenberry, there were these pioneers. They are the ones that invented the genre and started it all. This art illustrates the creativity of the ones like HG Wells and others that created what we know today as “Modern Science Fiction”.

Your company, NightmareMobile, has partnered with Dega Threads to launch The Science Fiction Art Anthology. How did your companies meet?

We actually met through Threadless. NightmareMobile has a great deal of 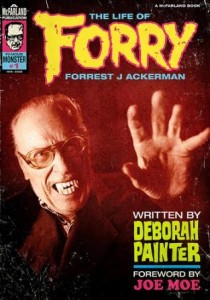 experience in movies, TV, and mobile content. As I mentioned this collection has been a huge hit with people and their mobile phones. But his endeavor is completely new to us—not a single one of these designs has ever been printed on apparel before. We needed someone who wasn’t just a creative person, but one who also understood the history of Sci-Fi, and knew the clothing business. Pablo and Dega Threads really impressed all of us at NightmareMobile. So that is why  Pablo is our creative director for the launch of the ‘Science Fiction Art Anthology Collection’

Will the Science Fiction Art Anthology be releasing the other 84 illustrations?

Yes, as it stands right now we’re going to be looking at releasing other great illustrations from the Science Fiction Art Anthology Collection in the future. So as Forrest J. Ackerman would say...