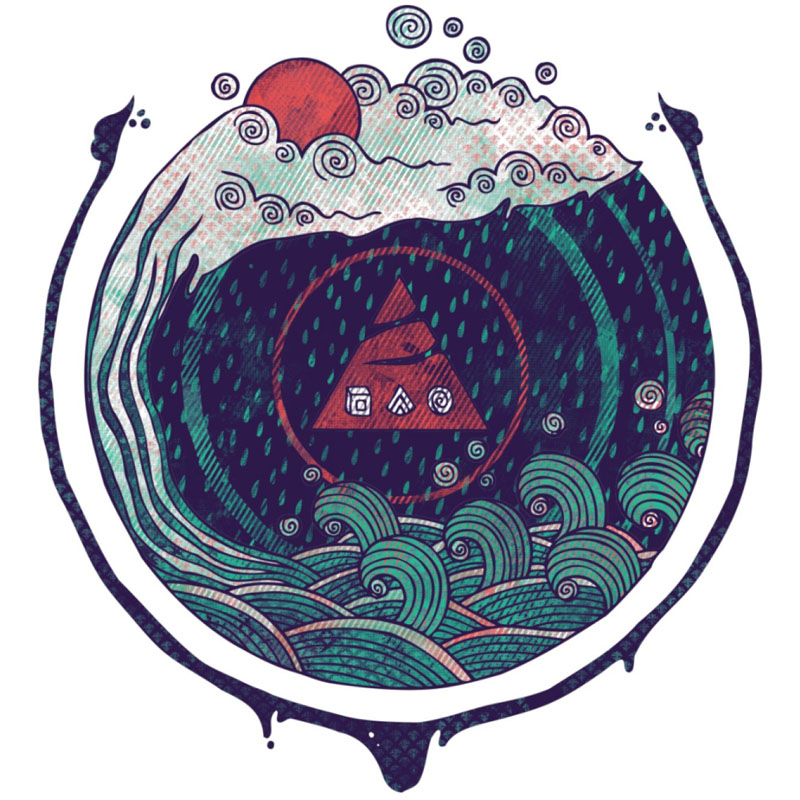 When you think about art inspired by video games and pop culture, you usually think of fan art. But Hector Mansilla’s (a.k.a “againstbound”) art shows that video game-inspired art doesn’t have to be literal – it can be beautifully interpretive. Hector’s art is heavily inspired by his love of video games, but very rarely does it ever represent the game that inspired it in a readily recognizable way. Instead, his array of dark dahlia’s, sprawling lotuses, and organic-meets-geometric designs create a style and vibe all their own, that now fill his Artist Shop.

We talked to Hector about how he translates inspiration into unique art, his Artist Shop, and about how he got into doing art full time. Check out the interview below!

You’re kind of a mystery! Tell us about yourself – what do you do for a living? What’s your happy place to chill? Do you believe in ghosts?

Hi there! I’m actually lucky to do this for a living, the whole illustration thing (earning in dollars and spending in pesos really helps with that). My happy place is right on my couch, PS4 controller in hand, playing a bunch of video games of all shapes and sizes (finally started Dark Souls 3!). And I don’t believe in ghosts – I love science. It gave me video games and cold coke.

You have such a unique style. What inspires you?

The main inspiration for my work comes from video games (recurring theme here). As I said, I play a bunch of different ones, including a hefty portion of indies, though it’s rare I directly reference any of them, and it’s even more rare for people to notice said inspiration. Sometimes it’s the general aesthetic or themes of a game that do the trick, but often it can be just a little detail that triggers a chain reaction and leads to a bigger idea.

I remember back in the day, I got inspired by the health bar in Resident Evil 4 (yes, really). And though video games are right at the top, I don’t limit myself to them. I’ll take [inspiration] wherever I can find it; movies, series, comics, landscapes, books, sometimes it’s something as trivial as a door handle.

What three words would you use to describe your style?

That’s an easy one: Rocket Propelled Alligator. No but really, hmmmm, I guess something like Arcane Natural Geometry (maybe?)

You have so many designs – how did you pick which ones to put in your shop?

Well, I basically went with my most popular ones. I did put in one or two unpopular ones that are among my personal faves, just to stick it to the man (which, in this case, is probably me).

You have a recurring lotus/dahlia design that you repurpose into new and cool designs – how did you develop this?

That started in the most trivial way possible. I just thought “I wanna draw a flower,” then settled on the lotus after some image searching. And I liked it
some, and people liked it even more, so I stuck with it.

That’s a tough one, and I have yet to find a definitive answer for it. I try to soak myself in music, movies, series, and video games that rely more on aesthetic, exploration and contemplation (Journey, Hohokum, Limbo, etc). I also started walking/running about two years ago and sometimes that can also help unclog

my mind. It’s all very hit and miss, though; if you know a surefire method of dealing with creative block, do let me know.

If you could live in a fictional world you create, what would it be like?

Damn, that’s something that would probably take me years to define, I’ll get back to you with the full specifics by no later than 2024. But for now, three quick ones: sleep is optional, healthy food is super tasty, and perhaps most important of all, no Paul Reiser.

You’ve been a member of the Threadless community for awhile now – how has your style changed since first submitting here?

When I first started I didn’t really have a well-defined style yet. Hell, I learned to do digital illustration while doing my first subs. You can go check them out in my profile, they’re horrible and I guarantee they will make you hate me, or your money back.

A lot of your work has a Lovecraftian vibe to it; is H.P Lovecraft an inspiration? Who and what most inspire you in pop-culture?

Oh, Lovecraft is most definitely an important inspiration. It’s mostly his general themes, but I did do a piece that directly references The Dunwich Horror (I really should get back into reading).

I generally try to stay away from directly referencing pop-culture, though; there are too many people doing that already, and the vast majority of times it’s just lazy, unimaginative, and relies solely on the popularity of the referenced work. I have done a few here and there, though, including some commissioned for Fangamer some years ago, but it’s never about hopping on current trends, and I stay away from lazy mashes.

What got you into t-shirt design?

I’ve been a fan of graphic shirts since I can remember, first with cartoon characters and the like, later on to band shirts, but nothing prepared me to the amazingness that was Threadless (and a few other comp sites). Seriously, it was paradise; better than anything I had thought of. I was looking to do something to alleviate the tedium and unfulfillment I was getting at my office job back then (among other things), I had no idea I was going to make a living off it. And while I’ve mostly moved away and rarely ever sub there anymore, Threadless still has a special place in my heart, for realsies.

What, to you, is the best part of creating art?

It’s something that doesn’t happen all that often anymore, because you get used to it and that’s how it goes. But from time to time I’ll be really into a design, all pumped up, having a great time working on it and then I’ll  stop and think, “Damn, and I’m getting paid for this.” It’s a great feeling and I don’t think I’ll ever get 100% used to it.