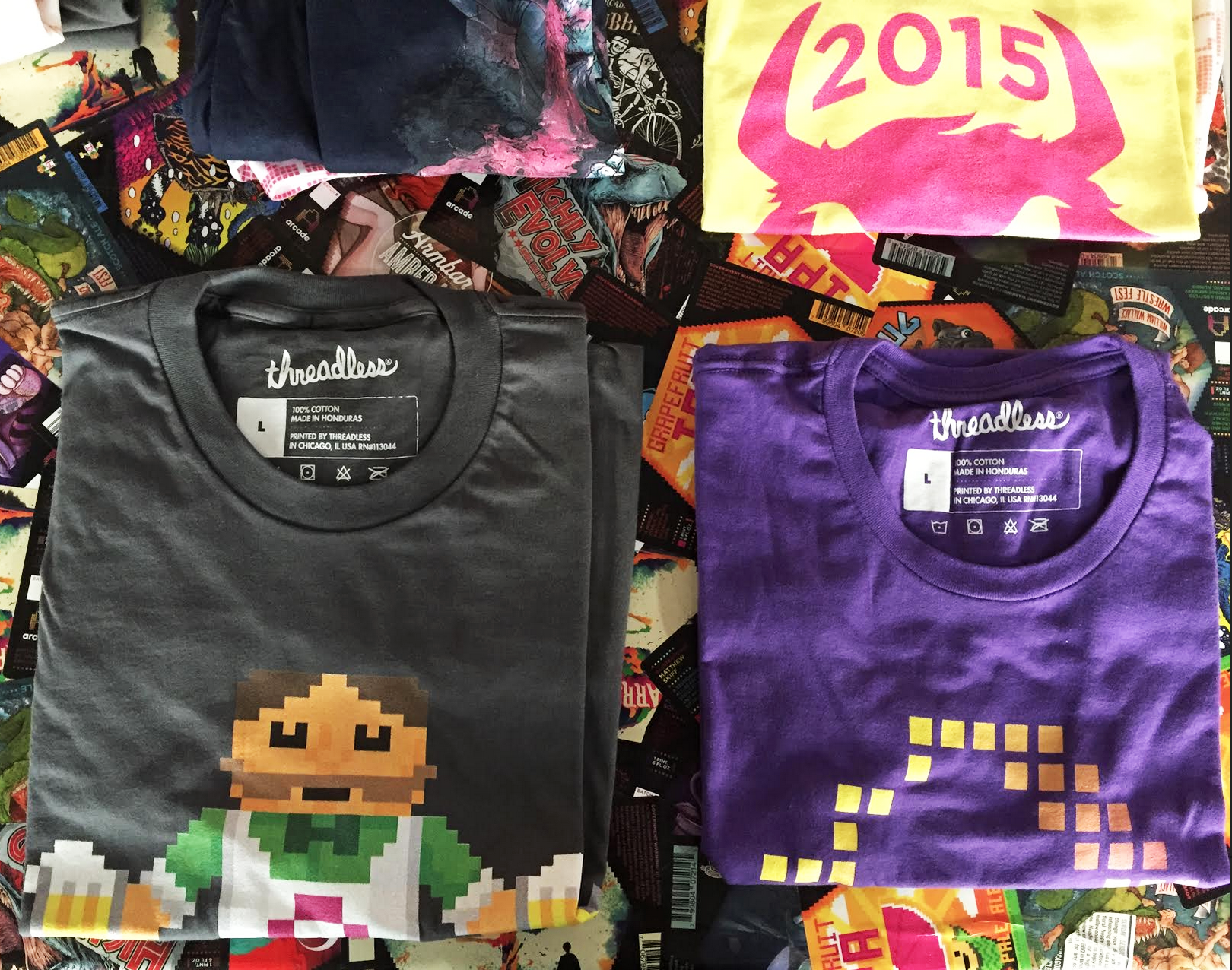 Comics? Awesome. Beer? Very awesome. Throw in video games and boom. You officially have the ingredients for the best night ever.

But Arcade brewery in Chicago combined these ingredients into the perfect brewery. From working with big comic artists to make “6-Pack Stories” – a 6-Pack with labels that tell a story – to letting people use Arcade’s pixellated bottle caps for sick rewards in vintage arcade spirit, Chris Tourre and Threadless’s own Lance Curran (who’s also the world’s coolest dad) have created the perfect lineup of beers to add to your aforementioned coolest night of geekery.

While sipping on Arcade’s Southern Hopisphere – the smoothest IPA I’ve ever had (which is saying a lot since I usually like heavier, Winter-is-Coming-worthy beers), I checked out their brew-space and talked to Lance and Chris about their venture and Artist Shop.

How did you decide to combine the spirit of an arcade/comic books and a brewery? Because there are “beercades” but this really takes it to a new level with your “6-Pack Stories”.

LANCE:  When I first started going to comic cons, everyone hung out in the hotel bars. You would run into your favorite comic creators, even celebrity geeks like Seth Green, all having a drink and just talking about the nerdy stuff they love, and I always felt it was weird that there really wasn’t a beer that catered to us.

CHRIS: Arcade Brewery started as an art project I created in 2011. I transformed gallery spaces into DIY breweries. Lance and I were bandmates at the time and I pitched the idea of starting a brewery that could capture the culture and passions that we shared.

Tell me about your “6-pack-stories” – did you coin (pun intended) this?

LANCE: We did coin the term 6-Pack Stories and use #6packstories when promoting. I was doing a comics-on-tees series with Threadless and just thought it would be fun to do a similar idea for 6-Packs of beer. I had discussed the idea with Tony Moore (“The Walking Dead”) and he was really into and brought Jason Aaron (Marvel Comics) onboard for our Festus Rotgut beer.

The other unique thing about 6-Pack Stories is we brew the beer based on the comic instead of the other way around. We want the beer to be part of the overall experience and pair well with the story and art.

CHRIS: It’s a backwards-design model and something we look at as a fun challenge in the brewery.  How do you make a beer that pairs with a story/comic?

Are any of your brewers traditional artists in addition to being beer artists?

CHRIS: I am! My background is fine arts. I completed my MFA in Studio Arts at UIC in 2009, ran my own art studio for three years, and then started Arcade. “Traditional” art is my background and helps add a different perspective and push the boundaries of the comic/video game aesthetic we are sometimes known for.

Do you think craft beer has become as much an art as traditional art/graphic design nowadays?

CHRIS: Absolutely. When there is a crowded market, companies are going to do innovative things…from the beers they brew to the design on the label.  Innovative beers and design go hand in hand.

LANCE: That’s tough. For comic books, of all time? “Sandman”, “The Invisibles”, “Transmetropolitan”, I could go on forever. Currently really into “East of West”, “Revival”, “Lumberjanes”, “The Woods”, “BPRD”, “Space Riders”, “Saga”, “Sex Criminals”, “Nameless”, and “Secret Wars”, and the new Darth Vader series from Marvel has also been fantastic.

My current favorite beer is Graveyard Shift Coffee Pale Ale from Arcade (and pretty much all Arcade beers :) ). Other than that I really love Moon Man from New Glarus.

CHRIS: I’m not a huge comic book guy, but love the project of our 6-pack stories.  I’ve always been a big Chris Ware fan. The quiet storm of his material is something that has always been alluring.  He creates such beauty in interstitial moments. My favorite beer is an impossible question to answer…there is a time and place for almost every beer.

Tell me a little bit about your Public Brews.

LANCE: This was based primarily on Chris making beer as an art project in galleries where he invited the public to bring ingredients and making the beer. Then with my Threadless background I felt it would be cool to be able to involve anyone in this process. So far it’s been a really fun experience and we love the excitement around creating our public brew beers.

CHRIS:  The person with the winning name gets a prize pack and the designer with the winning label gets $300 (and fame).  We love the idea of bringing people into our process and have received designs from over five different countries and all over the USA.

Do you do any other community-driven things?

LANCE: We do a lot of events for beer releases and we offer a token exchange program with our bottle caps. We usually have a fun deal at event where if you bring in a certain amount of our Arcade token caps then we’ll trade you for a shirt or some other type of swag. We’ve even partnered with some local businesses that will accept our tokens for deals.

Just like an arcade, that’s awesome. What are some upcoming art projects and beer releases we can look forward to?

LANCE: We have our Heavy Double IPA coming out Oct 2nd in honor of Back to the Future. And crossing our fingers that we have Vol. 2 of 6-Pack Stories out by late November. This year we have Jimmy Palmiotti and Darwyn Cooke for a series titled “The Adventures of Dutch Courage”.

CHRIS: We also have some barrel-aged beers coming out soon and will start bottling some of those for VERY special releases.  We also are going to start distributing some Nitro Mega Milk kegs, which we have been getting requests for almost a year now.