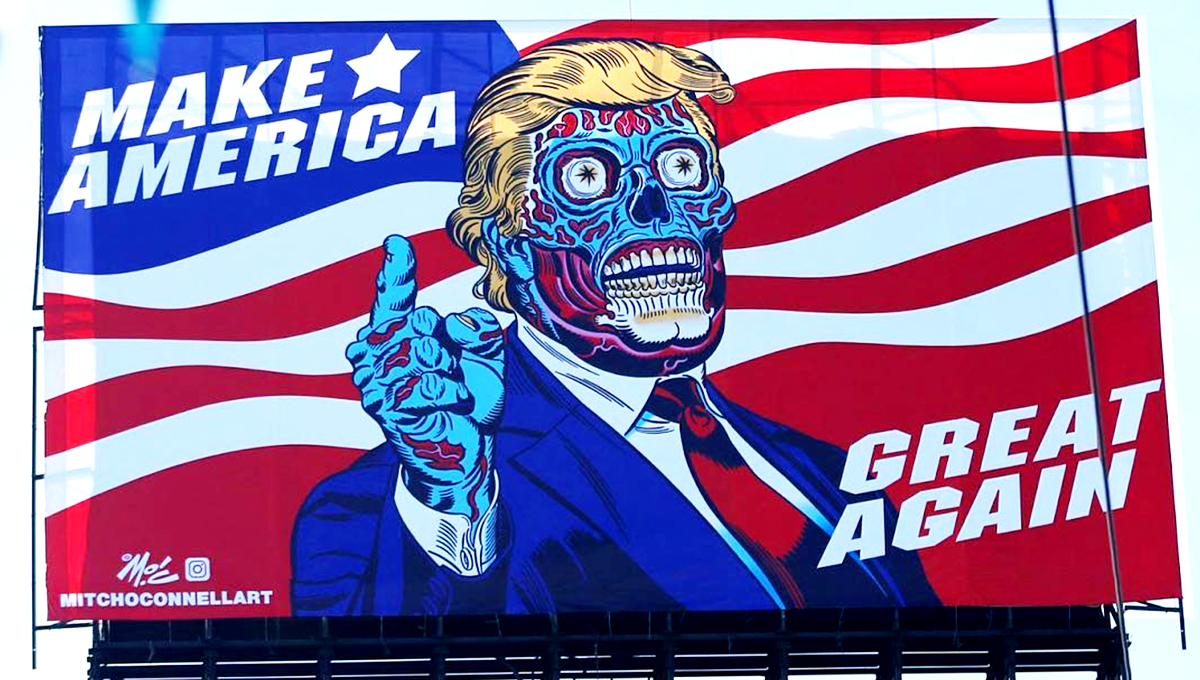 Science says that with every (political) action comes an equal and opposite (artistic) reaction. And the latest piece of political commentary making the news is in the form of a giant, skeletal Trump Billboard in Mexico City by Chicago artist Mitch O’Connell.

O’Connell – whose work has appeared in Newsweek, Time, Rolling Stone, New Yorker, Entertainment Weekly, GQ, and Playboy – based this design on the aliens in John Carpenter’s 1988 film, They Live. He initially made it for the Chicago 24-hour horror movie marathon “The Massacre” in 2015 (and made a Hillary variant as well). But you know what they say: “Go big or go home.” And O’Connell went big. Billboard big. After raising money for the project on GoFundMe and getting turned down by every billboard company in the USA, his “Trump/They Live” design found a home in Mexico City, Mexico, where it will stay for a month.

We talked to the self-proclaimed “World’s Best Artist” about how this venture started, the struggles of making this “Trump Lives” design live, and about its reception. Check it out!

This design originally came from a horror movie fest, but what sparked the idea for a full billboard?

In the two years since I did this piece, it’s become the most popular image I’ve ever drawn. It was a lighthearted joke when I drew it, but real life began to seem more like the art with every week that passed. Folks started to pick up on that, and along with the strong reactions people have for Trump and the love every movie fan has for They Live, the image just took off. So about five months back, I thought it would be a great art installation to have it as a Washington billboard. Now, I’m not going to risk breaking a hip by climbing up a forty foot pole to hang it up in the middle of the night myself, so I wanted to go about it in a much less strenuous way (legally.) :-)

What was the process like for actually securing a billboard for this design? It sounds like it was a huge challenge!

That turned out to be the surprising part of the story. Before I started the crowdfunding, I had a deal all set up with a billboard company here to have the art put up in Washington DC. When I raised enough money and said, “let’s go!”, they changed their minds. Over a two month period, I contacted every single billboard rental company I could find in the states, but not one could/would take my money and make this art piece a billboard anywhere. And then I thought of Mexico (endless details are here)!

How long did it take – before and after the billboard – for this image to start spreading?

Within a couple days of the billboard being up, it was apparently in most of the newspapers and evening news in Mexico. Locally, this was first written up in Chicago by NBC and Chicagoist, but once Reuters news service picked up on it the billboard spread like crazy everywhere. USA Today, Huffington Post, Yahoo!, you name it! I even made it onto Sarah Palin’s website! Now if only Trump would tweet about it. Maybe, “Fake Artist. Sad!!!”

How did you get connected with a billboard company in Mexico?

The amazing artist and pal Dr. Alderete is the owner of Vertigo Gallery in Mexico City where I had a show years back. I asked him if he knew of any billboard companies there he could put me in touch with. Instead, he handled the whole thing himself. Without his help who knows what would have happened. :-)

What’s been the reception of the billboard?

Apparently it’s a towering 45′ by 25’ on one of the busiest highways in Mexico, so millions of motorists are going to be driving past this towering Trump in the four weeks it’s up. From what I’ve seen on the internet, folks in Mexico are getting a kick out of it.

Have you seen any of your products featuring the “Trump/They Live” design out in the wild?

I’ve seen it tattooed, bootlegged on hundreds of items on Amazon, as street art, on political protest signs and more! I also offer the tees myself, so please check out the Threadless Artist Shop! :-)

Who knows? One viewpoint is from a new The Onion article that I hope I, in some small part, inspired: “Local Dipshit Planning On Fighting Trump Administration Through Art.” But even if my art isn’t directly responsible for the impeachment of President Trump and the revamping of all politics resulting in a perfectly run government, at least I found out that a drawing can still make an impression on the public.