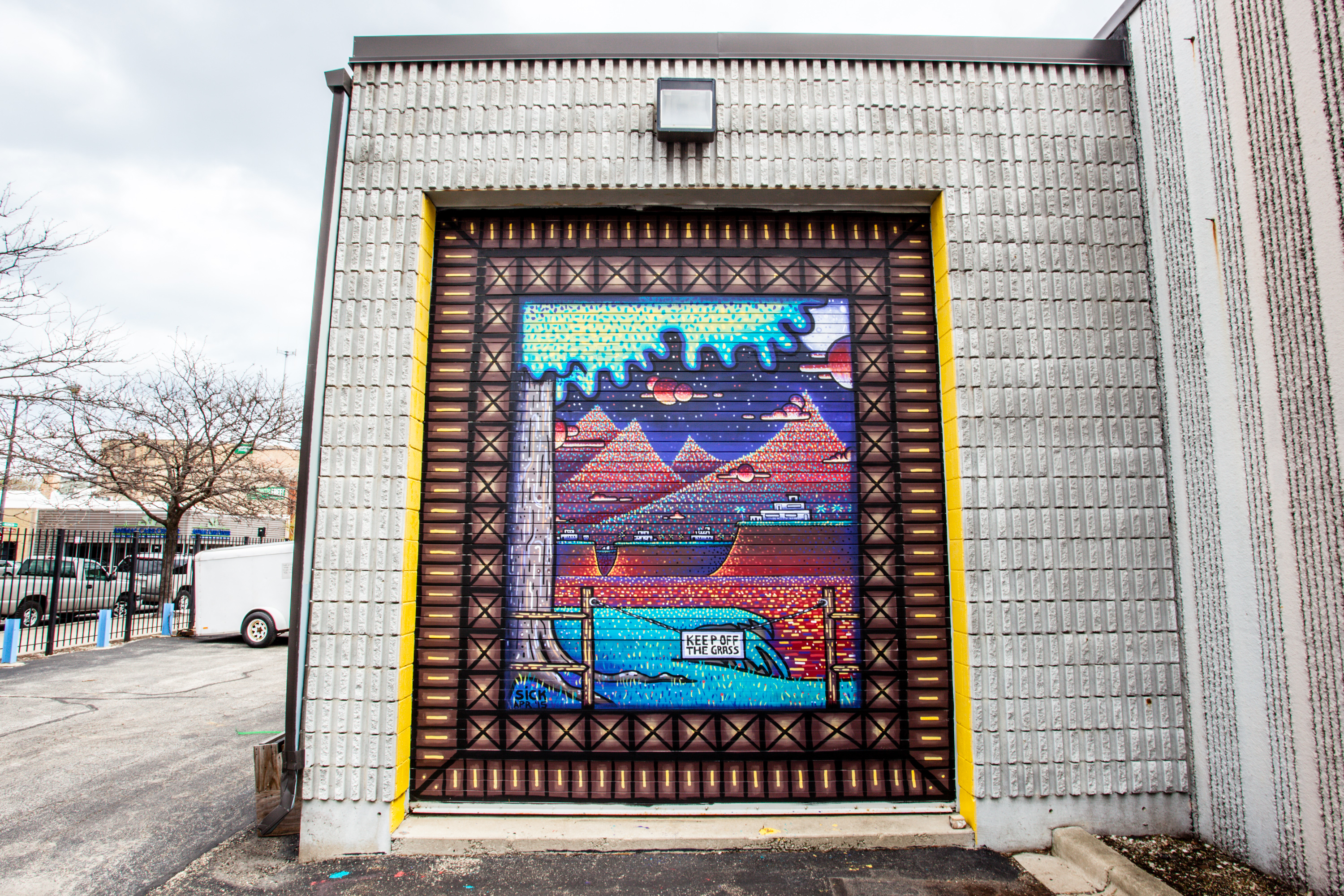 Nick Fisher originally considered pursuing film. However, after completing a painting for an art project while attending Florida State University, something clicked. This intuitive moment led him to change paths, and for the past seven years, he’s taken up artistic arms in Chicago under the alter ego Sick Fisher. Making his mark throughout the city with works both large and small, the artist visited Threadless to paint his piece called “Loveless Mansions on the Hill” – a colorful, tongue-in-cheek nod to San Diego coastal mansions. Read on to learn more about Nick, his work, and the time he spent his birthday painting a bathroom.

Hey, Nick! Thanks a bunch for creating such an awesome mural at Threadless. Why don’t you tell us a little bit about yourself?

It was my pleasure and thank YOU again for giving me such a sweet public canvas. My name is Joseph Nicholas Fisher (I answer to Nick, however) and my artist name is Sick Fisher. I was raised in Sebastian, Fl and attended Florida State University. I moved to Chicago in the spring of 2009 to continue my career as an artist. I now live and work in Humboldt Park.

So, you were raised in Florida. How did your upbringing down south influence your future as an artist?

I can’t really put my finger on how ‘the south’ fits into my influences. Perhaps it’s found in the colors I choose. I think that because I am so comfortable here in the Midwest at this time in my life, I don’t really think about the south so much anymore. I think more about the places I haven’t been.

Did you train formally in art or is it mostly self-taught?

I graduated with a BS in Studio Art. Or was it a BA? I can’t remember. I think I viewed college as just an inevitable continuation of high school. It was formal training, but I actually didn’t know I wanted to pursue art until halfway through the Studio Art program. I wanted to make films but couldn’t get into the FSU Film School so I fell back on the art program. I had made a large painting for my final project in a class and something kinda clicked into place. I had drawn cartoons my whole life but never considered painting. The switch from an illustrative to painterly technique evolved slowly over the last seven or so years. When I graduated, I had a particular style in painting. It has radically changed in many ways so I would say that the last seven years out of college has been self-taught.

What inspired your eventual move to Chicago, and how has the city affected your art career?

I knew that I would want to move out of Tallahassee once I graduated, I just wasn’t sure where. I wasn’t feeling NYC or LA at the time (2008), so Chicago felt like the most logical. I’d say it’s the people in this city that has most affected my career. The more you work, the more people you meet. The vast majority of my work is done in-person and by word of mouth, so it’s very important to be open to new relationships. Though each of my public works has a different ‘origin’ story, they’ve all started with people I knew before. The folks I’ve worked and partied with over the years are the ones that have gotten me all these spaces to paint. Except for the first one on Armitage and Francisco, I guess. That was Craigslist.

Do you work as an artist full-time, or do you have a “day job” per se?

I do still work at Flying Saucer in Humboldt Park as a server/busser but I have dropped virtually all of my regular shifts in these last few months to get my projects done. I could not work as much as I do as an artist without the support of Flying Saucer, honestly. They have told me repeatedly that if I have to take a sabbatical to get my work done, then go for it and not to worry about losing my job. That is pretty unheard of in the food service industry. Because let’s be honest, things will dry up come winter and I need this summertime weather to build momentum so I can go someplace warm in the winter to work outside. But yes, I do consider myself a full-time artist as it consumes my time 24/7 wherever I am.

It seems rare that you create the same piece twice. How do you determine the direction for new pieces?

Virtually everything I do is created on-site. I sometimes show up with an idea, but it evolves as the piece gets started. I like to have every public work fit into its environment, making the whole surrounding area more appealing. Therefore, every piece is different because every space is different.

A lot of your work has sort of an abstract, whimsical, “doodle-like” quality to it. Are these doodles you’ve been creating for years, or do you ever make up new motifs on the spot?

I make up new ones often, but also rely on some classics. Fake wood, hair, scales, etc.

Tell us a bit about the piece you created for Threadless. What inspired this particular concept?

“Loveless Mansions On The Hill” was inspired by my recent trip to southern California. San Diego, in particular. I was taken by the stark contrasts between Chicago and there. The weather, houses, mentality. They also have seal lions. Any rate, the landscape is taken almost directly from a view in La Jolla. The title is a play on a Hank Williams song, meant to imply that all these multi-million dollar houses on the cliffs don’t ensure their owners’ happiness. I’m not really trying to denounce this kind of wealth, just calling attention to it.

How does your process differ when you work large scale vs. small scale?

It really only means I use a ladder, bigger brush, and more paint.

Before the mural, you made over the women’s bathroom at Threadless with your awesome work. What was it like working on that project?

Haha, and it was on my birthday, too. It was just a fun project. I had always wanted to get work up in Threadless and this seemed like the easiest way to get in the front door. My sis, Jillian, hooked it up.

Do you have any any cool projects ahead for you?