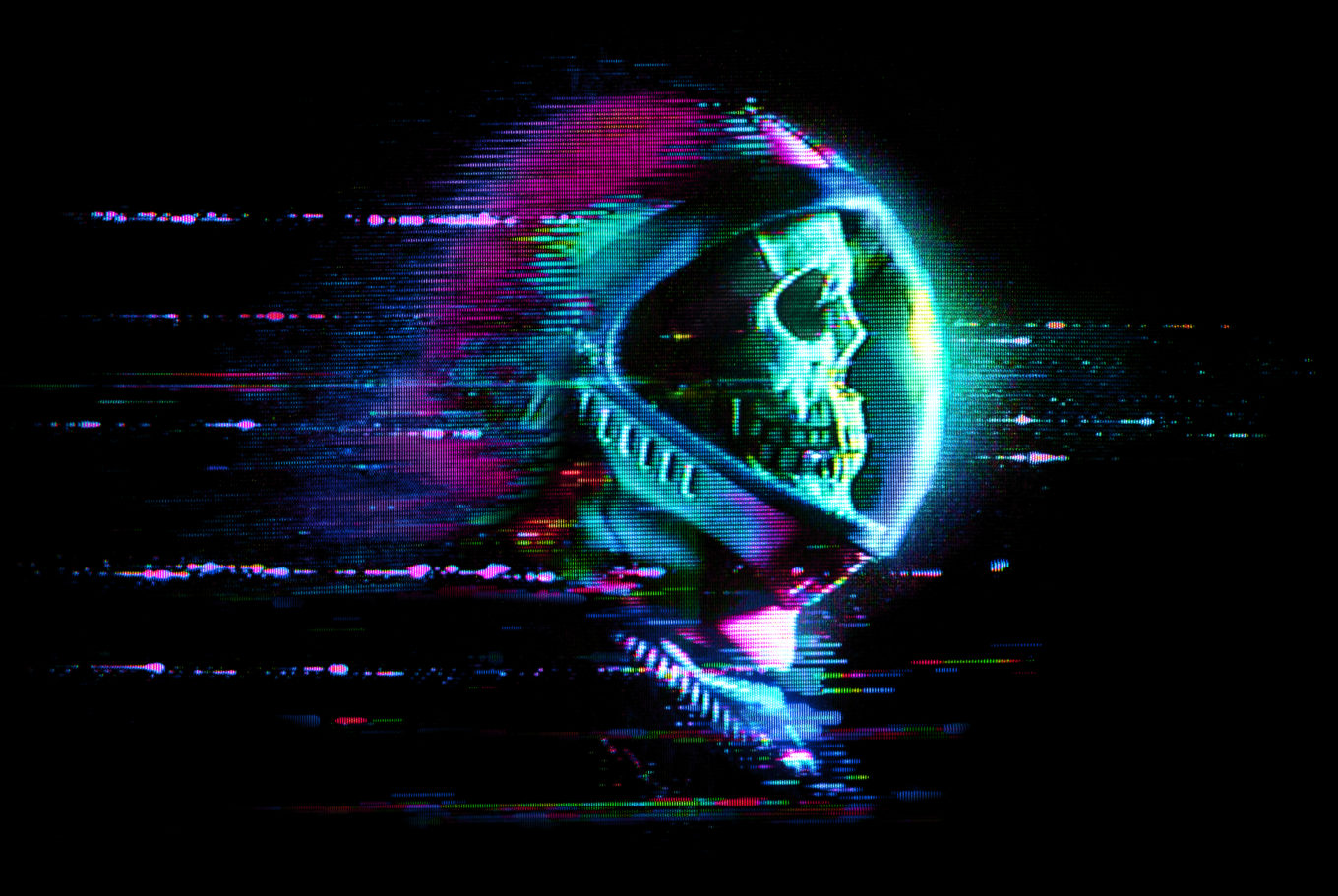 Rob Sheridan is no stranger to creating incredible visuals. As the former creative director for Trent Reznor and Nine Inch Nails, he spent 15 years shaping their visual identity. His creativity, which knows no bounds, has earned him not one, but two Grammy nominations.

Rob has a unique creative process as his all-over print designs are created by distorting analog signals through damaged VCRs and old CRT TVs. We caught up with Rob to learn about the inspiration behind his glitch-wave graphics, his full length comic High Level, and to get the scoop on all of his incredible Glitch Goods in his brand new Threadless Artist Shop.

You’re a prolific artist with work in graphic design, photography,
web design, video, glitch art, and comics to name a few of your
mediums. For an artist who works across so many mediums, do you have a
favorite?

I don’t think I have a favorite medium – experimenting across a broad
range of styles has always been important to me – but I have realized
the core element that I love most about all of my work: Telling
stories. Whether it’s an abstract visual story, the flow of a live
concert production, or a narrative in a book, I’m always driven to
take people on a journey. Stories are what connect us, and I’ll always
bring them into my work, whatever the medium might be.

What was it like being 19 years old and recruited by Nine Inch
Nails’ Trent Reznor to maintain the band’s official website?

It was surreal. Beyond surreal, really! I was a huge fan of Nine Inch
Nails in the 90s, they were really the soundtrack to my teenage years.
I was such a big fan that I made a fan site for the band as a way to
teach myself HTML when I was in high school and the web was really
starting to blow up in the mid-90s. At that time, NASA scientists
couldn’t have laboratory-designed a dream job I’d want more than to
work with NIN, so to this day it’s utterly beyond belief that they
ended up reaching out to me. Never dismiss fan art – it’s a great
gateway into the professional world!

How did you move from web design for the band to art direction?
What did that progression of your work look like?

It was sort of an organic process where the more tasks that Trent
threw onto my plate, the more he began to trust me creatively. It
reached a point where he was increasingly frustrated with the results
of visual work he was outsourcing for NIN, and increasingly impressed
by the stuff I was making right there in his studio. Trent is very
much a fan of doing things in-house with small teams he trusts, so he
kept throwing more artistic challenges my way, and it turned out we
were very in sync creatively. So my role kept growing, until I was the
full-time Creative Director for Nine Inch Nails.

Who were some of your early art influences? What kind of art were
you drawn to when you first started creating?

I grew up reading comic books, Marvel and DC and later on Image Comics
and Dark Horse and Vertigo and many independent imprints in the 90s —
and as I grew up with those books, I learned to draw by mimicking
their art and making fan art of their characters. I always thought I’d
end up being an illustrator or a comic book artist, but my career took
a different path. It was wonderful to discover that all the lessons
you learn in the foundational elements of visual art – composition,
color, style, aesthetic, visual narrative and purpose – can be adapted
from illustration to photography to graphic design, and even to
writing/directing.

What was your favorite part about touring with Nine Inch Nails?

My role in touring with Nine Inch Nails was about tweaking the visual
production of the show as the tour went on – watching it each night,
seeing what production tricks were working and which weren’t, and
returning every day with updates to make the visuals better, or add
new elements when Trent wanted to add a song to the setlist. The show
was an evolving beast, never the same at the end of the tour as it was
at the beginning. The whole journey was creative, and we put a lot of
ourselves back into the tour — it was almost a collaboration with the
experience itself.

What’s your favorite project you created while working with the band?

In terms of scope and creative satisfaction, nothing compared to the
Year Zero ARG (Alternate Reality Game). We brought a fictional
dystopian future mythology to life in a way unlike any other album
experience had been done before, and the way it connected with a
global community of people was incredible. Everyone who was a part of
that experience carries it with them to this day.

As a visual artist, what was your role in the band How To
Destroy Angels?

For How to Destroy Angels, Trent envisioned the group as more of a
“collective” than a band, where the visual presentation was as
important as the music. My instrument was imagery, and on stage I
brought my art direction to life with video elements that washed
across our stage and ourselves throughout the show, creating a true
multimedia experience that was much more than a concert. On stage, my
instrument – a custom MIDI controller and iPad interface – had
real-time effects and triggers that controlled and manipulated the
video set we performed in. It was a unique vision of a “band” and the
live shows were among the coolest things I’ve worked on in my career.

What did your process look like for creating your full-length comic
book High Level?

At the beginning, creating High Level involved a lot of frantic
scribbling in notebooks late at night and early in the morning in our
RV in the middle of the forest. Once the initial ideas and inspiration
hit, I started building a fully-realized future world, and the story
began to flow naturally through it. Those hundreds of pages of notes
became a detailed World Bible, and then my brilliant editor Andy
Khouri helped me structure this grand story into a chapter arc, and
finally a first issue breakdown. As the story was coming together,
Andy and I exchanged ideas and influences for the artwork. I wanted to
realize the world of High Level in a sort of vintage European
retrofuturist style – I mentioned Moebius, Heavy Metal, 2000AD, that
sort of thing. Based on this, Andy introduced me to the work of
Barnaby Bagenda and Romulo Fajardo Jr, who he’d worked with on a book
called OMEGA MEN, and the fit was absolutely perfect. Once Barnaby and
Rom were on board, they took all of the notes and scripts and sketches
to entirely new heights, and the comic was born.

How do you balance what inspires your art and what you feel drawn
to create? What do you do to refresh your artistic passion when you’re
not feeling inspired?

Working as an independent artist is hard. It’s a constant hustle, and
you don’t have the luxury of following pure inspiration. You have to
think about which threads of ideas to follow that are also going to
lead to some bills getting paid. It’s taken a while, but I’ve found a
balance I’m really happy with, where the strange ideas and experiments
that stoke the flames of inspiration in me can be funneled into real
commercial projects – whether that’s fine art prints, t-shirts and
merch, or new pitches for comics, TV, and games. And honestly, my
secret weapon is my wife and manager Steph. She manages and produces
all my projects and handles the business side of things so she’s the
key to keeping me inspired and organized.

It’s not always easy though — the constant demand of commercial art
output doesn’t always align with the sparks of inspiration. The worst
feeling, as every creative professional knows, is having a job you
need to complete and feeling completely creatively vacant. The
deadlines don’t go away just because your ideas do, and in those times
of feeling stuck, sometimes the “coming up with an idea” part that’s
felt like an absolute breeze at other times suddenly becomes the worst
part. I’ve found the best way to inspire new ideas is to take yourself
out of your comfort zone. Upend your routines, get off the internet,
spend some time in nature, travel, put yourself in new and frightening
situations – disrupting the patterns we all find ourselves sinking
into is key to lighting creative sparks.

Don’t be shy about your art. The digital landscape is crowded and
competitive – not just for work but for peoples’ attention. Everything
moves at light-speed, and just getting someone to notice something
you’ve made can be exhausting – and for artistic types, very
defeating. We as artists usually don’t have the type of personalities
where hustling and self-promotion come naturally. It feels dirty,
antagonistic to the integrity of our creations. But if you want to
make something of your art, you have to force yourself down into the
mud of yelling about it from the mountaintops. Believe in it, first
and foremost, and then don’t be afraid to let everyone know you
believe in it. Get it out there any way you can, and never feel bad
about self-promotion. 99/100 times it will fall on deaf ears, but if
your work has resonance, one of those ears will eventually notice.
There’s a flip-side to this, which is that it’s actually okay, and
perfectly wonderful, to be shy about your art, IF you don’t care about
making a career of it. Art is the most joyful when it’s pure and
personal, something you make because you need to and you don’t really
care if anyone notices or not. That’s a wonderful creative space to be
in. You really have to decide whether you want your art to become a
business or just stay personal, because it has a huge impact on the
confidence you have to have in your work and the willingness you have
to do that very scary thing of putting it out there – and getting
rejected, likely many times.

To learn more about Rob Sheridan, visit his website and be sure to shop his full collection in his Glitch Goods Artist Shop!