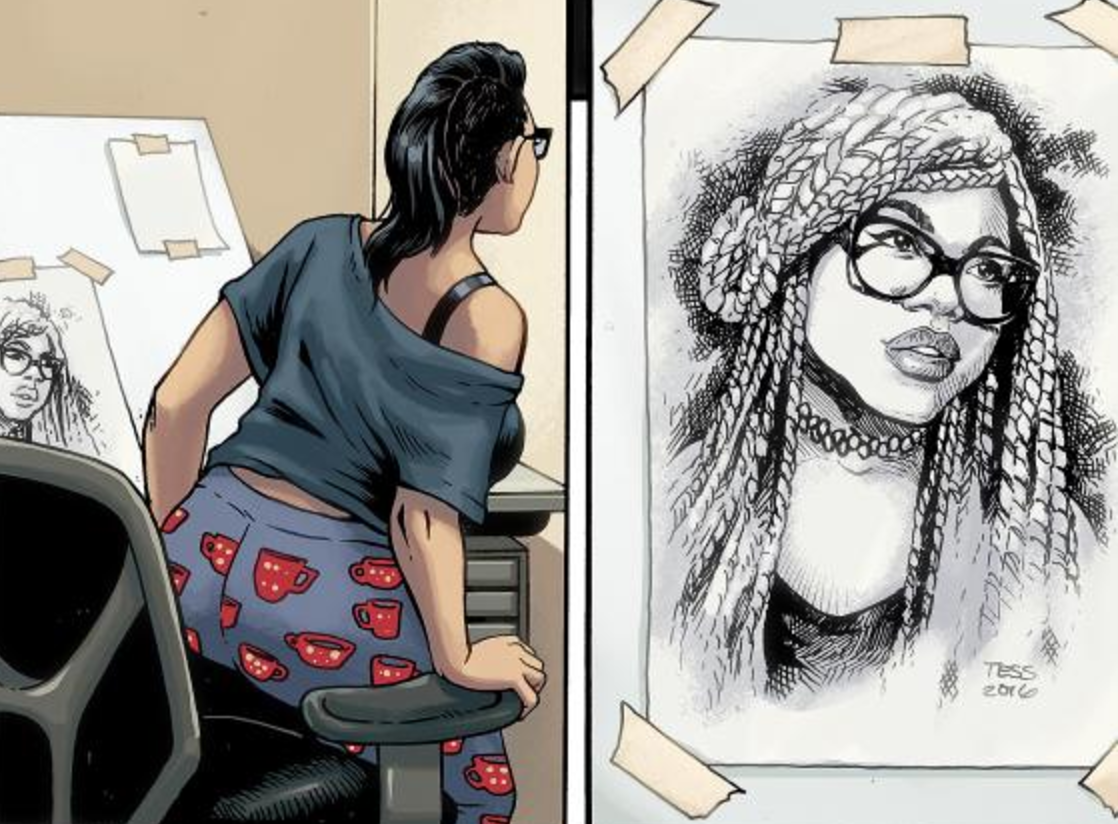 Much like the movie trope of kids reading comic books hidden in their textbooks, comics have a whole lot of social commentary hidden within their pages. Because whether we’re talkin’ about Wonder Woman breaking the chains of the patriarchy or superheroes working together amidst the aftermath of 9/11 in The Amazing Spider-Man Vol. 2 #36, comic books have always been an approachable way of commenting on the state of the world. So it’s fitting that now, the graphic novel Femme Magnifique aims to bring the stories of amazing women to bookshelves everywhere.

Femme Magnifique is an anthology celebrating the true stories of 50 groundbreaking women of yesterday and today alike. This hardcover beauty of badasses women is being put together by comic editor extraordinaire Shelly Bond and Brian & Kristy Miller of HI-FI Color, as well as insanely talented writers and artists in the comic industry (including a few artists who have worked with us: Annie Wu, Kieron Gillen, Dustin Harbin, Ming Doyle, and Mike Allred).

We talked to Shelly Bond and Brian Miller all about Femme Magnifique, their new Artist Shop, and all about their Kickstarter, which you can support here! (Hurry! Time’s almost up – be the hero this graphic novel deserves!) Check out the interview!

Tell me a little bit about how Femme Magnifique got its start and came together!

SHELLY BOND: The idea for curating a short story anthology that salutes inspirational women was simmering for awhile, but crystallized during two disparate, back-to-back events: the election and an electronic concert. Like many US citizens, I was saddened by the missed opportunity for a woman in the White House. But I was truly horrified by the negativity generated online. I felt like someone needed to make a call-to-arms within the comic book community so we could all move forward, channel the anger into positivity. The night after the election results I had a ticket to see my favorite frontwoman, Roisin Murphy, perform at LA’s legendary El Rey Theatre. She’s a brilliant singer-songwriter/performance artist and it was my first time seeing her live stage show which, in one word, was transcendent. As I watched the crush of the enraptured, like-minded crowd I knew that FEMME MAGNIFIQUE had to happen. And fast. That’s precisely how, why, where and when the idea went from theory to execution.

Shelly, you’ve edited over 950 comics and graphic novels, that’s incredible! What, to you, is the importance of social commentary in comic books?

BOND: It’s everything. It’s so important to rip the sheen off society, to admit who we are, the way we live now. As a fully (finally!) recognized component of pop culture, it’s our artistic duty to incorporate all things — good, bad, ugly, beautiful, bombastic — into our comic book stories. We need to document our frenetic times for ourselves and for future generations so they can revere us –and, of course, learn from our hideous mistakes.

How did you decide which comic artists/writers would tell which stories? Did they pick or was the art style/story curated by your team?

BOND: When I decided to put the book together, I didn’t want to just go to the usual suspects. I wanted to make sure I had writers in mind who had true female heroines to honor because I wanted personal stories. Also, it was a chance to work with some very exciting new voices. In some cases, I had an ulterior motive and definitely wanted to pair up two people who, in my humble opinion, I predicted would kick ass on the page, like Kieron Gillen and Annie Wu. In other cases, like when I approached writer Mike Carey, he brought the wonderful young Greek artist Eugenia Koumaki to my attention. Then of course there’s Bill Sienkiewicz; One of the sweetest people you’ll meet in comics. He’s best known for his searing, stunning artwork. But Bill’s writing is equally astounding. To this day his work on Stray Toasters makes me shiver — and weary of oranges. I knew I had to charm him into writing and drawing a story for FEMME MAGNIFIQUE.

Tell me a little bit about your Artist Shop and the designs in it!

BRIAN MILLER: Our plan is to start with a few key designs and set in motion plans to work with top creative talents who are committed to the finest of Femme Forward fashion, art, and design. Our Artist Shop is kicking off with three primary designs. The first is “Iconique” and features the artwork of Elsa Charretier (Harley Quinn, The Unstoppable Wasp), available as a weekend bag or a throw pillow. It’s an image with moxie, a design that brightens any room or mood.

The next design we call “Politique” and it features typography inspired by popular Helvetica font. The FEMME MAGNIFIQUE graphic novel anthology features groundbreaking women from the disciplines of art, science, politics, and pop. This message is reflected in the Helvetica text set on garments in selected shades of black, gray, or red.

The final launch design is “Chequers“. This is a playful design featuring red and white quadrants with icons representing art, science, politics, and pop tied together by Charretier’s FEMME MAGNIFIQUE icon art. This design looks terrific on a phone case and is also available on select items.

One of the great opportunities that arises from partnering with Threadless is the ability to be proactive in our message of female empowerment, and also be reactive. Some of the most inspiring designs come from artists who create during times of duress. Threadless allows us to turn those powerful images into highly visible t-shirts, and art-prints, as well as other popular items, and deliver them to our supporters quickly.

Are the designs in your Shop official products for the Kickstarter?

MILLER: The designs are crafted to tie-in to the Kickstarter campaign for FEMME MAGNIFIQUE. We’ve been very fortunate to have the support of over 1000 backers. When the opportunity arose to partner with Threadless for an Artist Shop, we knew it would give us the opportunity to offer FEMME MAGNIFIQUE backers bonus rewards and add-ons. It would be challenging for us to source all the sizes and styles needed to accommodate everyone but Threadless makes it easy so we can stay focused on our funding campaign. In addition to the designs found in the FEMME MAGNIFIQUE Artist Shop we have an exclusive t-shirt available as an add-on for our Kickstarter backers. We’ve already seen many backers excited to claim this exclusive t-shirt from Threadless as an add-on to their existing pledges. Partnering with Threadless has given the FEMME MAGNIFIQUE Kickstarter campaign an extra boost to help us smash through our remaining stretch goals.

You’ve been working with Hi-Fi Colour Design on this project. How did this relationship come about?

BOND: For over a decade I’ve had a great relationship with Brian and Kristy Miller of Hi-Fi Colour Design. Brian has colored some of my favorite series for Vertigo like Bite Club, American Virgin, and New Romancer. I had a feeling that Brian and Kristy were also bummed out about the election results. Also, I knew they had Kickstarter experience and that Kristy ruled the business side of Hi-Fi with an iron tennis racket. So I was grateful when they took my phone call. As co-curators, we’re unstoppable.

Even though we’ve come really far in the comic world, comics are still regarded as a bit of a boy’s club. But there are a TON of female artists and creatives working in the comic world – does this project aim to bring them to light along with the women featured in the book itself?

BOND: This project was always intended to salute 50 women who crack skulls and change the game for future generations. But it was also my intent to salute the magnificent writers, artists, letterers, and colorists – not to mention the comic book as an art form. If one teenager reads this book and decides to grow up to become a comic book editor, my work on planet earth is complete. Actually, answer redacted. I have tons of work to do in orchestrating the art and alchemy that’s coming your way via BLACK CROWN, the ruling class of comics at IDW Publishing. Yes, that was a plug. You’re Threadless. I’m shameless when it comes to self-promotion. 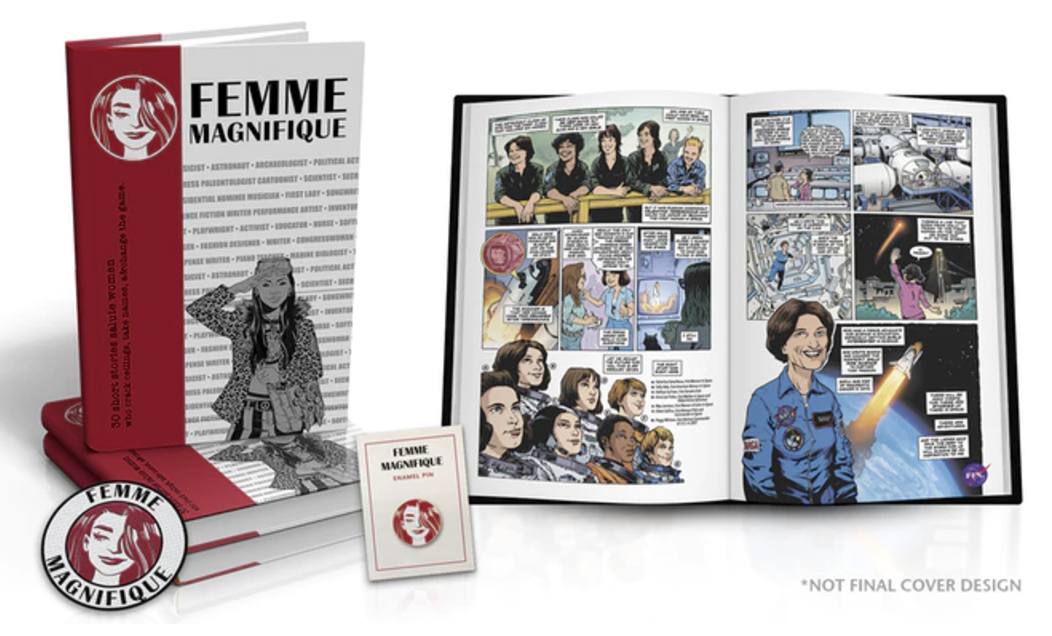 What’s your goal with Femme Magnifique? What do you hope comes out of it once the project is complete and available to all?

BOND: I hope it becomes an evergreen title on every bookshelf in libraries, classrooms, bedrooms, and corporate boardrooms. It was crafted to document our history of powerful, inspirational women and to remind the masses that women have already changed the world, and will continue to do so. We’re unflappable, and we deserve to be saluted and celebrated.

Finally…you have a favorite comic character or comic?

BOND: Do I look like the type of person who plays favorites? Of course I do. Who wouldn’t? I have many. First and foremost is Grendel by Matt Wagner and Love and Rockets by the legendary Hernandez Bros. Those are the books that got me into comics. As for characters I’ve worked on as an editor, it has to be Shade, the Changing Man. Because who wouldn’t, who couldn’t fall for a demented, Byronic, brutalist madman? Favorite comic series of the ’90s is without a shadow of a doubt, Stray Bullets. David Lapham wiped the floor with mainstream comics with that one. In recent years, it’s Charles Burns’ latest trilogy. Collected recently as Last Look!, it made me fall to my knees with supreme joy and desperation.

But to be brutally honest, with no disrespect to anyone I have ever or will ever work with, the books I’m crafting right now for BLACK CROWN, my new creator-owned imprint for IDW PUBLISHING, are the best books I’ve ever had the pleasure to curate and edit. Our debut book in October will crack open your head and let a bullet train ride through it. But don’t worry. You’ll feel fine and ask for seconds.