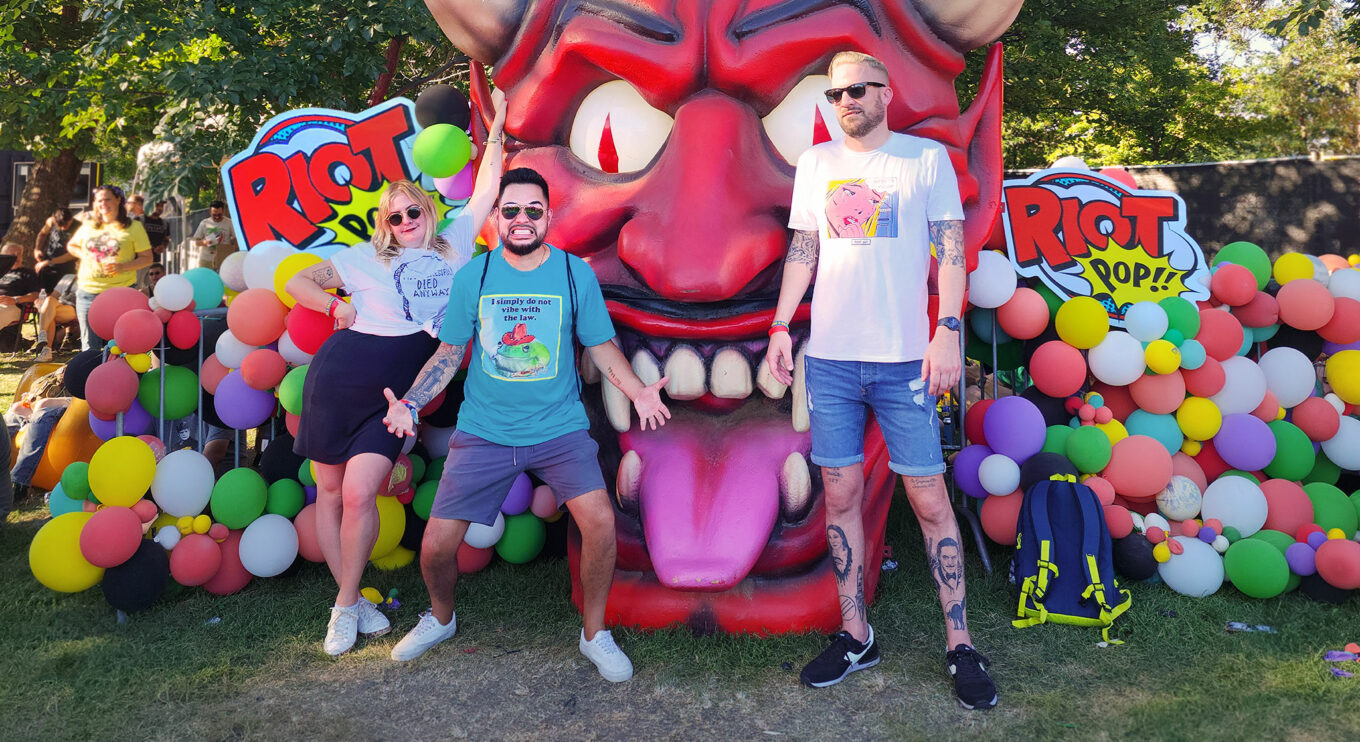 When someone compliments your t-shirt at a punk rock festival like Riot Fest, it almost feels like you earned street cred, but without having to graffiti a building or tattoo your head. You might be able to keep a straight face while saying “thank you,” but on the inside, you can feel the confetti cannons going off.

My close buddy Shaun and I crave that sort of validation all the time (probably something we should sort out with our therapists), which is why we’ve made it an ongoing tradition to see who can get the most compliments at concerts by wearing something bold or ridiculous. At Riot Fest 2022 in Chicago’s Douglass Park, we engaged in our most epic battle for compliments yet with tees we handpicked from Threadless.

Throughout the three-day event, we walked between the fest’s five stages while seeing how many people would react to our t-shirts. Halfway through each day, we changed into a different tee to switch up our strategies. See how our friendly competition played out, along with highlights that made this year’s Riot Fest memorable for us.

DAY 1: WELCOME TO THE BLACK PARADE

By noon, My Chemical Romance fans were already swarming the festival grounds like ants on a dropped ice cream cone. Compared to previous Riot Fests I’ve attended, I’d never seen that many people arrive so early on a Friday. If emo really is dead, then we were in the middle of a zombie apocalypse. But lucky for us, these zombies were more interested in our tees rather than ripping the flesh from our bones.

“Woodstonk ’99” by Teenage Stepdad vs. “Maybe Today Satan” by meandthemoonn

Initially, I thought “Woodstonk ’99” by Teenage Stepdad was a no-brainer since Netflix recently released a Woodstock ’99 documentary over the summer. I figured it was still fresh enough in people’s minds. But as I was heading into the festival, I realized my parody t-shirt blended in with all the other concert tees people were wearing. How could I get compliments when I was hiding in plain sight?

Then, while in the VIP check-in line, a bearded man in a patch-covered battle vest smirked at me and said, “Nice shirt, dude.” Then someone else in line said, “Ha! Birdturds,” while listing off the misspelled band names on my tee. That’s when I knew it would be an eventful day.

Arriving separately, Shaun also had similar success with “Maybe Today Satan” by meandthemoonn. He’s 6’4” and the design is far more legible from a distance, so he immediately had an advantage (or at least that’s what I told myself). He also went one step further than I did—literally fishing for compliments. He went on the offensive by complimenting other people’s shirts first in hopes that he would get one in return. AND IT WORKED. That slick son of a gun…

I knew a t-shirt featuring the late great Gilbert Gottfried would grab attention, but damn! I was stopped 21 times! Its all-over print made the comedy legend’s lovable smile visible from all angles, and that certainly played in my favor. I got shoulder taps, I got fist bumps, I got “OMG, I LOVE YOUR SHIRT.” During Taking Back Sunday, a few people even asked if they could take my picture.

Meanwhile, Shaun spent his evening in the Deluxe VIP section, where he received mostly positive, but mixed reactions with “Keep Abortions Safe” by SMACKERYBINX. Not only is this shirt metal AF—perfect for the Riot Fest crowd—but it also spreads an important message during a critical time for reproductive rights.

Unfortunately, there were two festival-goers who took offense and hurled insults at Shaun. They’d probably be disappointed to know that SMACKERYBINX donates 35% of their proceeds from this design to grassroots organizations including Richmond Reproductive Freedom Project and Cobalt Abortion Fund. Sorry, not sorry!

DAY 2: WHO STILL WALKS AMONG US?

You could sense the hangover lingering over the second day of Riot Fest. There were much fewer people when the gates opened, which meant less opportunities for compliments. If a three-day music festival is a marathon, then we were all the rookies who sprinted through the first day. But despite our tiredness, there were so many more fantastic acts to see—Mannequin Pussy, Movements, Madball, and, of course, The Original Misfits. All the best “M” names!

“Just Stop” by rodrigobhz vs. “Abolish Ice” by The Peach Fuzz

Shaun and I started the day with two Threadless Causes tees donating to nonprofit organizations. I wore “Just Stop” by rodrigobhz, a cute cat design supporting Greenpeace’s work to preserve the environment. I’m convinced Riot Fest’s security personnel are either environmentalists, cat parents, or both, because several of them told me “I love your shirt!” when I walked into Deluxe VIP to grab lunch.

Much to my disappointment, though, the Monster Dogs food truck line was way too long for me to wait in without missing a few bands. That’s when I noticed a giant hot dog walking around…I’m still not sure if it was real or a mirage. Maybe the heat was getting to me.

Elsewhere in the festival, Shaun wore “Abolish Ice” by The Peach Fuzz, which supports The Bail Project’s efforts to reunite families by paying bails for people in need. Despite him choosing another design about a hotly debated issue, no one shouted obscenities at him this time around. Instead, people were drawn in by its clever twist on the classic ICEE logo. Nostalgia is a guilty pleasure, like a cold slushy on a hot Riot Fest afternoon.

“Quit Jizzin’ in the Hot Tub” by Obscurest Vinyl vs. “I Want to Leave” by WolfGut

Later in the day, I got plenty of reactions with “Quit Jizzin’ in the Hot Tub” by Obscurest Vinyl. Unfortunately for me, it didn’t amount to as many compliments as I had hoped. People definitely thought it was funny, but few actually engaged with me at all. In most cases, they either just laughed and looked away or whispered to their friends, “Did you see what that guy’s shirt says?” Apparently having bodily fluid on my shirt made me less approachable. Who woulda thought?

Shaun had the opposite experience with “I Want to Leave” by WolfGut, which is a hilarious spoof of the iconic “I Want to Believe” poster from The X-Files. It was like it had its own gravitational pull. It not only attracted fans of the show, but also those who just agreed with the shirt’s sentiment. Solid pick for Shaun.

Throughout the entire festival, we spotted tons of t-shirts designed by none other than Australia’s own Steven Rhodes, one of the top-selling artists at Threadless. If you’re also tickled by his dark reimagining of old children’s books, explore the Steven Rhodes Collection at Threadless.

If you can make it to the last day of Riot Fest unscathed, you have the stamina of an American Gladiator and your nickname should be something like Millennium or Torpedo. Three days of running back and forth between stages will humble you, all while the sun snatches the soul from your body. Although I arrived at the festival soon after the gates opened, Shaun couldn’t make it until later in the afternoon. Our competition was in jeopardy until…

A NEW PLAYER ENTERED THE GAME

Our mutual friend Darce stepped up and put on an extra Threadless tee I brought with me just in case. As you can see from the photo above, she infused much-needed energy into our silly competition, which helped her snag a cool 6 compliments in the early hours of Day 3.

“I Do Not Vibe” by Frogwitch vs. “Poop Art” by Mathiole

Frog memes are having a moment on the internet right now, which is why I knew I couldn’t miss with “I Do Not Vibe” by Frogwitch. A frog wearing a cowboy hat is such a wonderful image, and “I simply do not vibe with the law” is so fun to say out loud. In fact, several people repeated it back to me as I walked by, like it was some sort of mantra. If that’s not a stamp of approval, I don’t know what is.

While we waited for Shaun’s arrival, the afternoon was building toward a special moment for me. The first CD I ever owned as a kid was Coolio’s Gangsta’s Paradise, and I finally got to see him perform live for the first time. You better believe I belted out the lyrics to “Gangsta’s Paradise,” just like I did when I was a 7-year-old growing up in the suburbs.

Shaun finally made it into Riot Fest around 4:30 p.m., which didn’t give him much time to wear his first shirt, Mathiole’s “Poop Art.” Go ahead and guess where he received most of his compliments—by the porta-potties, of course. How apropos. Or should I say apropoo? (I am SO sorry for that.)

“Flowers on Leopard” by mmartabc vs. “Adequate Expression of Feelings” by Fox Shiver

My last shirt of the battle, “Flowers on Leopard” by mmartabc, had so much potential, but I just couldn’t walk around the festival anymore. By the evening, my knees were shot, my feet were throbbing, and I had to “watch” the Yeah Yeah Yeahs while laying on my back looking up at the clouds. Shaun and I spent the rest of Day 3 keeping a low profile in Deluxe VIP.

However, there was one last highlight for me that was completely unplanned. After I took a picture of Shaun in his last tee, “Adequate Expression of Feelings” by Fox Shiver, someone walked up to us and said, “Sorry for photobombing your picture! I just couldn’t help myself.” I looked at it on my phone and laughed, but then I realized I had seen her before.

It was Jetti Lewis! She’s a Chicago–based artist and member of the Threadless community who’s appeared in various Threadless promotions over the years, including in our marketplace, in an Artist Shops commercial, and even on Threadless Blog. This entirely coincidental encounter was the first time I met Jetti and the most fitting way to cap off Day 3 of Riot Fest. Oh, and Nine Inch Nails was cool, too.

When it was all said and done, we really couldn’t have anticipated all the compliments we received at this year’s Riot Fest. It was a true testament to the talent and ingenuity of Threadless artists who make our community such a fun place to find wearable art. If you crave validation just like Shaun and I, get yourself the funniest, cutest, raddest, most attention-grabbing t-shirts you can find at Threadless!