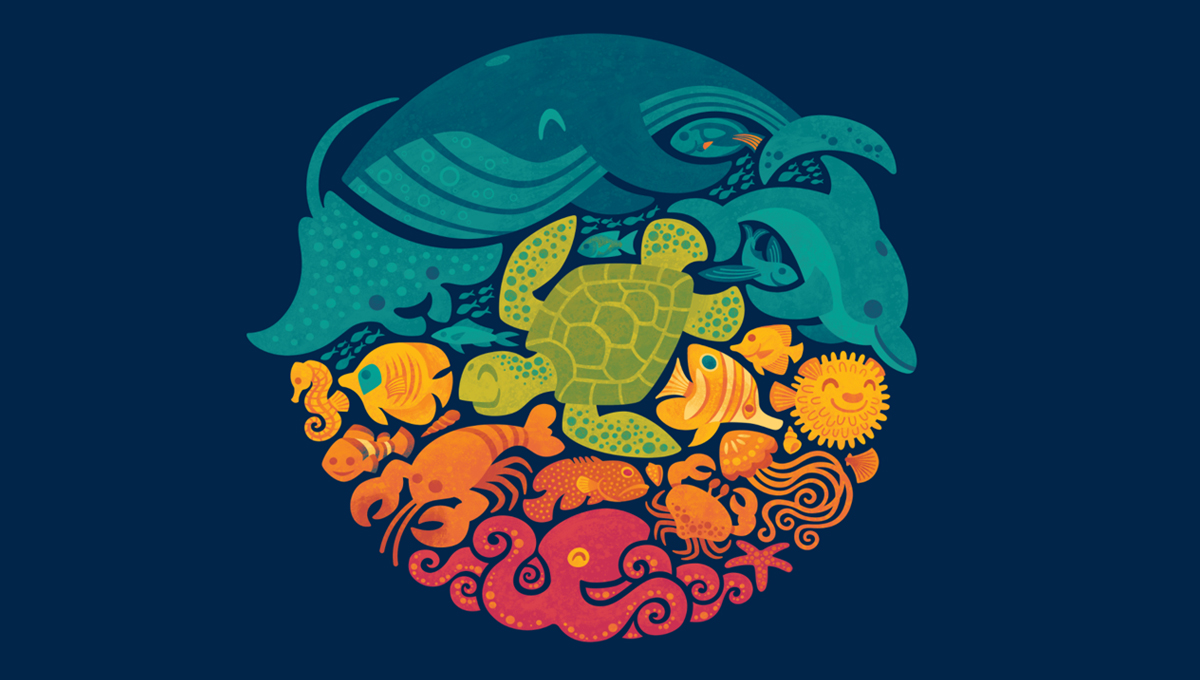 We know less about the bottom of the ocean than we know about space. But the most important thing we do know about the ocean is this: it’s awesome. And this week, we’ve got a fresh new design by Wayne Minnis (@waynem) that celebrates the ocean, its majesty, and all of its creatures.

We talked to Wayne about his new design, his world travels & how they inspire his art, and about his Artist Shop. Check out the interview (and sketches of the design) below!

You’re kind of a mystery! Tell us about yourself! What do you do? Where are you from? What’s your new year’s resolution?

Well at the risk of shattering my carefully cultivated mystique, I’m a graphic designer from Brisbane, Australia, although for the past few months I’ve been traveling around Europe. My new year’s resolution is definitely to be more productive. I’ve been sitting on a whole bunch of design ideas which are all in various stages of progress so this year I really want to start getting them finished and out into the world.

This is your second print on Threadless! Excited?

Extremely! I’ve been chasing a second print for a while and hopefully it won’t be the last this year.

It looks like you do quite a bit of traveling! What are the top 3 places you’ve visited?

I’m really, really bad at picking just a few favourites so I’m going to cheat a little bit. Broadly speaking my favourite kinds of places to go are to the mountains, so countries like Canada, New Zealand, Switzerland and Scotland – the desert, so central Australia, the Southwest USA and the Sahara – and the exotic, places like Morocco, Thailand and China. I like almost everywhere really. Except maybe Wales. Someone threw a packet of mints at my head there and I’ve never entirely forgiven them for it.

A lot of your recent designs have a cool outdoorsy theme to them! Do your travels inspire your art?

Definitely. I’ve been incredibly lucky to have had the chance to travel to so many incredible places and I’m trying to do more work inspired by this, both through illustration and also using some of the photos I’ve been taking, too.

This design is so cute! What inspired it?

It’s actually a sequel to another design of mine, Animal Rainbow, which has always been quite popular. There’s so many sea creatures of different shapes and colours it seemed like a natural choice to do next.

I’ve got a few other animal designs like this in mind but they always take ages to figure out the best way to jigsaw everything together I need a bit of a break in between each one.

I’d probably have to say octopus, which is probably why this guy’s shown up in two of my designs so far. They’re such a unique, visually interesting creature. Really smart too.

Do you prefer land or sea?

Land for sure, but I grew up near the coast so I’m always happy to get back to the ocean when I’ve been away from it for a while, if only to check that it’s still there.

This design is also available in your Artist Shop, which looks awesome! How did you select which designs to include in your Shop?

Thanks, I just pick the best ones really! I’ve got a bit of a mix of styles in there but I want to make sure I only include what I consider my very best work in my Artist Shop.

You have a very specific style! How did you develop it? Who and
what inspires you?

I think I’m still very much in the process of figuring out exactly what my own style is. I like to tackle a pretty wide variety of subjects so I’m trying to bring a bit more visual consistency to my work.

As for inspiration, there’s so many, particularly on this site, but I guess a few artists whose work I’ve seen as a big influence on what I do recently would be Olly Moss, Joey Chou, Sergio Toppi and Alphonse Mucha.