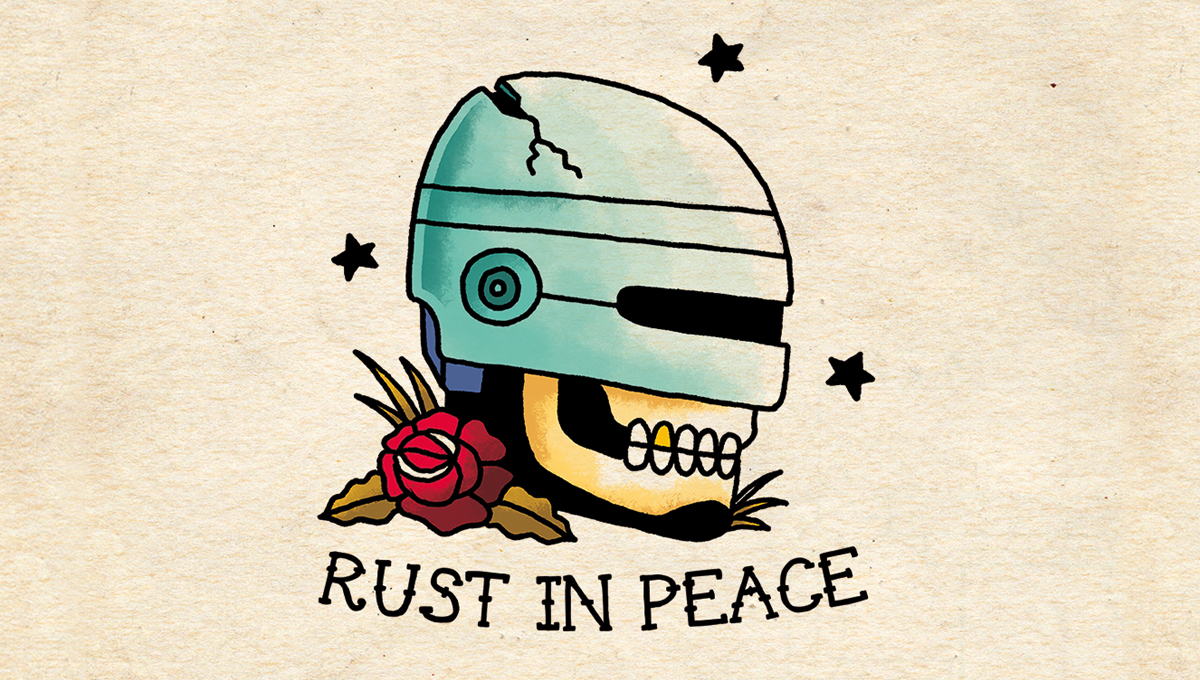 “Dead or alive, you’re coming with me…to the tattoo parlor.” The winner of our tattoo challenge Michael Buxton (@DinoMike) created a design that’s worthy of wearing forever on either a tee or your skin! Buxton gave classic tattoo art a futuristic twist that would make both a certain robotic cop AND Sailor Jerry proud. We caught up with Buxton and talked about his favorite futuristic tattoos, the children’s book he just illustrated, and everything in between!

First things first, what have you been up to since last we talked! Any cool projects?

Hey Threadless! Yeah, last year was a really busy one for me. As well as all the tee designs, I had my first children’s book published, which was an amazing feeling. I was only the illustrator for hire, but it was something I’ve wanted to do since college. It’s called Parrot With a Hat and I think it’s released in the US this year. So if you’re a fan of birds and headwear, it should tick all the boxes. I’ve got some more book projects in the pipeline, but a laser sight has just appeared on my back just mentioning that, so I better not talk about them.

Tell us a little bit about this design! This is different than your usual style; was it a challenge for you?

I generally try to tackle subjects that I enjoy and Robocop is probably in my top five films, so it’s always been on my list to create a design inspired by it. I had the idea for the ‘Rust In Peace’ slogan but didn’t really know how to implement it properly, and then you guys announced the tattoo challenge and I thought illustrating it in an old-school tattoo style just made perfect sense! Then it was just a case of getting the technique figured out.

How did you get the great tattoo ‘faded’ effect? What was the process?

I looked at a lot of old Sailor Jerry tattoos to see how they were illustrated. In general, they had really bold and thick line work and vivid but slightly faded colors. Normally, I don’t like to include line work in my illustrations, but for this, I didn’t really have a choice. So I really tried to lean into that style of tattoo by hand drawing it and not being the fussy idiot I normally am! Then I colored it up in Photoshop using some custom brushes to try and replicate the way the colors look on those old designs.

Are there any famous or sci-fi tattoos you just think are the coolest? Any tattoos of your own?

The only answer is Snake Plisskens’s cobra tattoo in Escape From New York. One: it’s Kurt Russell, so it’s immediately badass. And two: his name is Snake, so it makes a lot of sense.

I have exactly zero tattoos. And it’s not because I don’t like them, I’m just always worried about getting something then hating it after a few months! My girlfriend has a few tattoos and I’m always tempted to take the plunge, so maybe one day when I’m super old I’ll get something done and then die of extreme old age a few days later.

Tell us a little bit about your style! It’s very consistent – what artists, shows, movies, etc. are you inspired by?

I like to make sure I’ve got a solid idea before starting something, and then I try to illustrate in the most obvious way. This usually means being quite graphic with limited colors, but I also like stuff to look a little handmade and retro. Normally with cats.

I’m inspired by lots of different artists for different reasons. I love the insanely clever ideas of Olly Moss’ illustrations, the playfulness of Scott C. and the amazing color choices of artists like Josh Cochrane and Tony Riff. I received a book about Eyvind Earle for Christmas – she was a Disney concept artist back in the ‘50s and her work is just mind-blowingly amazing.

Just to try and make sure I enjoy the work and always try to push myself to keep improving. There are so many amazing designers out there these days that you have to try and stay on top of your game.

Remember in arcade games in the ‘80s there would be a warning from the FBI not to do drugs? That was pretty weird.