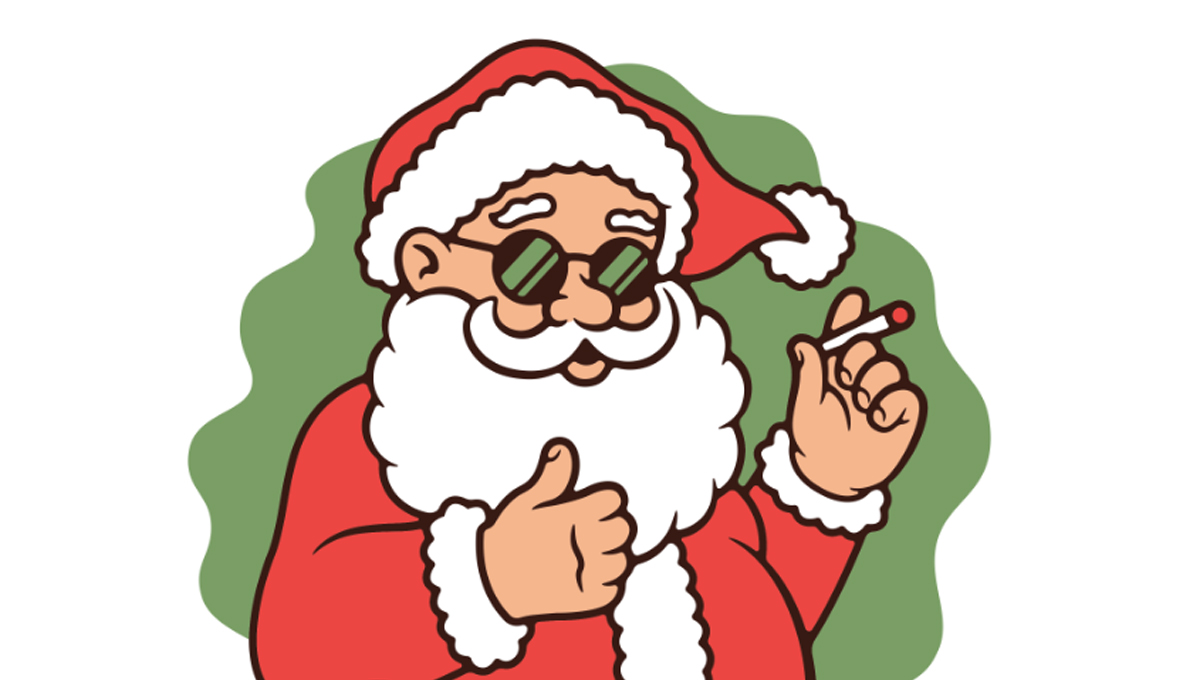 No wonder Santa is always in such a jolly mood! I mean, think about it: no one ever thought to make weed illegal in The North Pole. The winner of our Holiday challenge Cody Weiler (@csweiler) created a holiday-inspired design that embraces a true Christmas miracle: a chilllll holiday. And his version of Santa has got the munchies for two things: great design and cookies. We talked to Cody all about this design, how it came about, and all about the new Santa lore he’s created. Read more below!

First things first, what have you been up to! Working on anything exciting?

Mostly I’ve just been designing my life away (but loving every minute of it). Aside from some freelance work, recently I’ve been working on a new series of designs. It’s a fictional book series called A Fool’s Guide, and I’ve done quite a few of them so far. A couple of my favorites are A Fool’s Guide to Technology and A Fool’s Guide to Psychology. I think the idea has a lot of legs and I’m looking forward to doing more.

Where did the idea for this amazing design come from?

Honestly, I’m not quite sure haha. I’ve done a few similar designs where a lovable character is drinking or smoking something. Even before this challenge came up, I had it in my head to do a version with Santa. While I was working on the illustration, the words kind of just popped into my head and I knew it was meant to be. Maybe it was a Christmas miracle?!

What was the process behind this design?

Typically, I have the concepts for my designs before I ever start working on the illustration. Once I feel that an idea is worthwhile, I do a super rough sketch just for layout and then jump into Adobe Illustrator. The bulk of the time spent is drawing and refining in Illustrator.

What’s one question you would like to ask Santa if you could? What do you think he would answer?

This was a tough decision for me, but I think that I would have to ask him: Why didn’t you ever bring me the Talkboy that I so desperately wanted as a child? I put it on my list three years in a row… :(

We gotta ask… what do you think Santa’s fave kind of munchies would be? (If cookies, specifically what kind?)

I think the idea that Santa loves cookies is incorrect. I imagine him as more of a Hostess snack cake kind of guy, specifically… HoHos. (Sorry, had to do it.)

When you were a kid growing up, what was your favorite part of winter?

It has to be snow days! There is no feeling quite like waking up for school only to be told that you no longer have to go. I desperately wish that concept could carry over into my adult life.

What podcasts, books, or shows do you watch to boost your creativity that you would recommend to other artists and creatives?

I’ve listened to a lot of motivational podcasts by artists and designers, but what truly inspires me is watching or listening to creatives outside my discipline. I find it extremely motivational when anyone excels at their craft. Corny as it may be, some of my favorite things to watch when I’m looking for inspiration are The Great British Baking Show, Inkmaster, Chopped, The Joy of Painting, Forged in Fire, etc.

In my experience, it’s easier to get motivated by, say, a tattoo artist, than another designer. Probably because I’m not comparing myself to them, which allows me to fully appreciate the process and the final result. Also, it totally gets my head out of whatever project I’m working on at the moment and into another form of creativity. Usually, when I’m done watching an episode or two I’m ready to get back to work on my own stuff.

Just a big ol’ thank you for another printed design! I truly wasn’t expecting this one. Seeing that congratulatory email in my inbox never gets old.