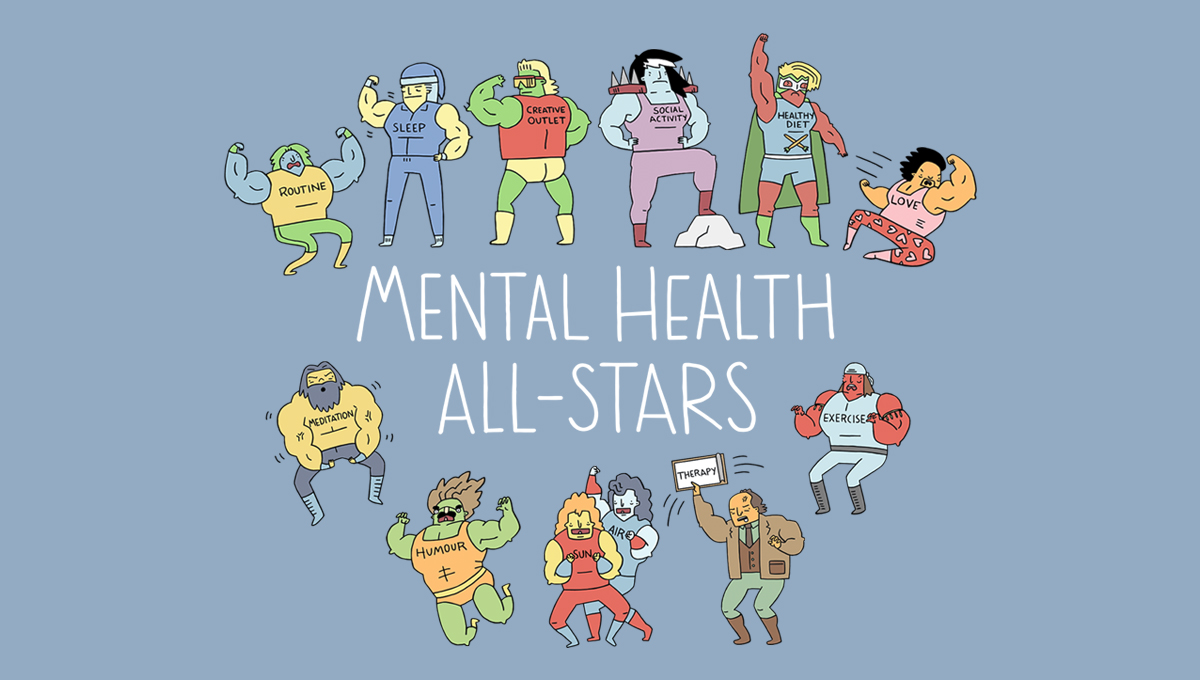 Pop quiz! Is “Honey Dill” A: a webcomic so relatable and addicting you won’t leave your room until you’ve read every single one or B: a delicious dipping sauce? The answer is C: ALL of the above. The Honey Dill webcomic was created by Canada-based artist, Ryan Harby. His art and comics really took off with his hit illustration, “Mental Health All-Stars“, which turns positive self-care activities into little super wrestlers. From that internal panic we all get when we receive a call vs a text to the very real struggle of remembering names vs faces, Ryan is the master of capturing little moments that are overwhelmingly relatable and bringing them to life in comics that blend the everyday with the surreal.

Read more about Ryan, how Honey Dill got its start, where he gets his ideas, and more! Oh, and about that dipping sauce thing, don’t worry – all will be explained.

Your About Page explains that Honey Dill is a local dipping sauce – why did you choose this for your webcomic’s name? Is this dipping sauce amazing? Are we super missing out?

Yeah, it’s kinda funny. At first, I had no clue what to call my comic series, no clue at all. For some reason the name Honey Dill kept creeping into my mind, it’s a honey-based dip that’s pretty common in Winnipeg but isn’t very well known even across Canada. I liked the idea that for most people, it would just sound like a combination of the two words but for me, it’s always a local reference. Oh, and it is very delicious! You are definitely missing out.

What’s your most popular design?

The Mental Health All-Stars, for sure. I’ve had stuff that did pretty well in terms of popularity, I guess. But that comic had a life of its own, truly. It was something I had posted with no idea if it would resonate with anyone and after a couple weeks, the social media analytics reported the comic had reached somewhere over eight million people. I honestly still don’t know how to contextualize that.

The Mental Health All-Stars: Allies in the fight against the void. pic.twitter.com/0JGIm0n4Jd

I should say that one great thing that came from that post was a huge outpouring of messages from therapists, counselors, social workers, just lots of people directly involved in mental health work who wanted to reach out because they liked the message so much. That part was amazingly rewarding.

How did Honey Dill get its start! What was your very first comic and how has the webcomic grown since then?

Honey Dill started with a few really short comics, just kinda seeing what I could even put together. I think the actual first comic was a short three-panel thing where the gag was how close the Google Earth zoom function could get to someone’s face. I feel like the comic has changed a lot over time, always for the better. The audience has been a huge part of that, too.

You used to work at a newspaper, and then in the advertising world. When did you decide to go full-time with your comics?

I wouldn’t say I’m totally full-time in comics yet, but the dynamic with my work has shifted in the last year so I can focus more on my own creative projects. Before, I would work full days so I could come home and draw into the night. Now, I’m able to work on my own stuff more often and pick up neat freelance gigs to help keep the lights on.

Did you learn anything from those two jobs that helped you with the comic work you do?

Absolutely! I worked as an editor for years and that allowed me to grow a lot as a writer, which hopefully comes across in the comics here and there. Both jobs allowed me to work my skills whether it was literally making comics or developing my ability to write and illustrate. I like to think you can apply most life experiences, no matter how varied, in a useful way to your current situation.

Where do you find inspiration for your comics?

The inspiration for my comics usually comes from real life situations. I was really influenced by absurd, bizarre comedy growing up so I love it when something normal takes a sharp turn.

Among other things, try to be honest. If that’s too abstract to apply directly to the “work” then try to apply it to yourself, your relationship with others, your expectations. You’ll be happier about what you’re doing if it’s an honest expression. I think, anyway.

Be kind to others. Is that too lame? Whatever, just do it anyway.