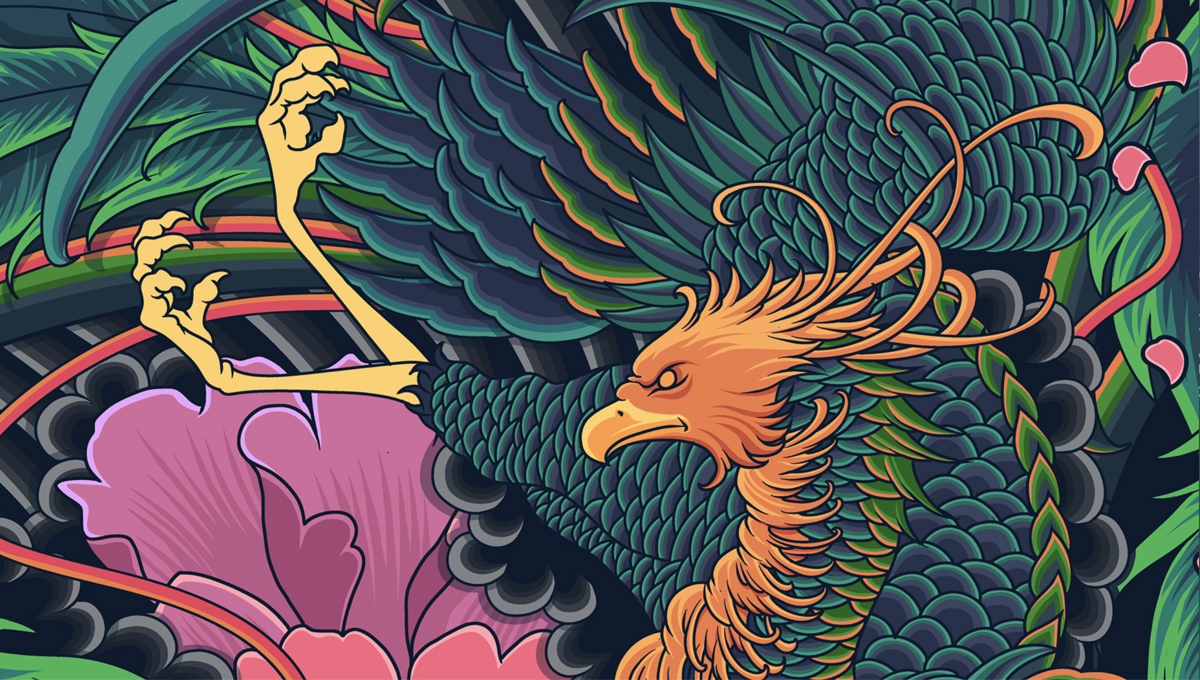 Out of all the mythical creatures, the Phoenix might just be the most relatable. Rising from the ashes of your former self through reinvention is something we’ve all done (although, maybe with a little less spontaneous combustion involved…). And artist @prajoedi represents the bird of fire in a tattoo-esque Phoenix design that, in fact, reinvents the look of the creature with tropical vibes and cool colors – no flames required. We talked to the selected artist of our Leggings 2 Challenge about his own reinvention, the anime influence behind his own style, and about the process of this design. See all the raddest WIP sketches and his answers below!

First, icebreakers: tell us a little bit about yourself! Do you do art for a living?

I am a father of two children. The older one is Djagad, she’s five years old. And the younger one Djuna three years old. My first wife passed away two days after giving birth to our second child three years ago. I moved on, and now I’m just married again and I have the best wife for me and mother for my little kids. Since I was a kid I’ve liked to draw and always wanted to be an artist. Anime cartoons like Dragon Ball and Mobile Suit Gundam inspired me to become an artist. But since my parents didn’t support my dream, I was forced to study Law. After I got the Bachelor’s degree, I had no idea what to do and couldn’t imagine myself working behind the desk as a lawyer, so I went to study Graphic Design to realize my dream.

Today I do art for a living, working as a freelancer for clients on the other side of the world. Every day I wake up, I go straight to my laptop to check email and feedback from clients, and then I start drawing. Sometimes I just stare at my screen for hours without drawing a single line, just thinking about ideas. When finally I get the idea, I can’t stop drawing. Even when the project almost finishes. Sometimes I have to start over again from scratch just to make it right and perfect. Occasionally, I have to put them on hold and continue months or years later.

Congrats on your winning design for our Leggings 2 challenge! What attracted you to creating a Phoenix design? Is it your favorite mythical creature?

Phoenix symbolizes virginity, immortality, and resurrection. When Phoenixes die, their bodies will set on fire and then arise from their own ashes, which I think too much for the curse. They have many beautiful features; the feathers and colors, and the shape looks like the fusion between eagle and peacock and I like to spend my time detailing my designs. But my favorite mythical creature is the Garuda because he is the king of the birds and also it’s my national emblem/crest.

Were there any other design angles you considered for this challenge?

Many, but not all good for leggings. I wanted to make dragon scales designs but I didn’t get a chance to realize the concept because I spent most of my time fixing this Phoenix design (while watching The Walking Dead Series from season three until the season seven… XD).

Tell us a little bit about the process behind this design!

It didn’t go well though; at some point, I felt the design was overdone, I got to remove this and that parts, patched it again over and over, I felt frustrated and almost put the design back to ‘sleep’ again. But finally, I managed to adjust the composition and colors of the designs, then I submitted it on the last day of the challenge. :) And I’m very grateful this design has been selected as the winning design on Threadless!

You have such a beautiful style – what art styles inspire you? How did you develop the look of your art?

I spent my childhood watching anime and Japanese tokusatsu back in the early ‘80s. Mobile Suit Gundam, Sharivan, Gavan, Kamen Rider, Saint Seiya, and Dragon Ball were booming in Indonesia, my father used to take me to Video Rental Stores on the weekend to rent video cassettes and let me watch the series all day.

I used to draw anime characters from the movies while watching. That was the earliest time I developed my anime and manga style. Since then, I’ve drawn many things – in my school books, walls, anywhere; mostly Japanese characters. I have to say that I can do many different styles but not all; I can do cartoon style, Manga, Marvel/DC comic style, Japanese tattoo style – I tried them all, but I feel more comfortable with DC/Marvel and Japanese tattoo style… I fused them all together, and you can see it in my art. :)

Pay attention to details; every pixel is worth a damn!