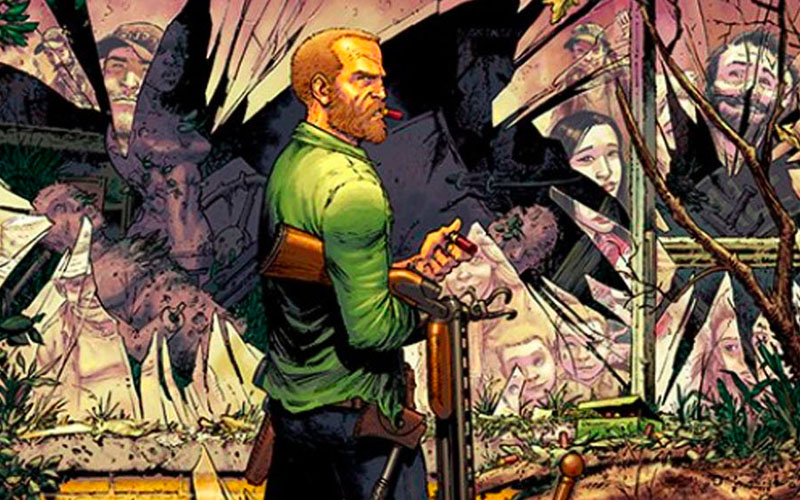 Before it was the show that we live-tweet and have nightmares about, The Walking Dead was an awesome comic book. 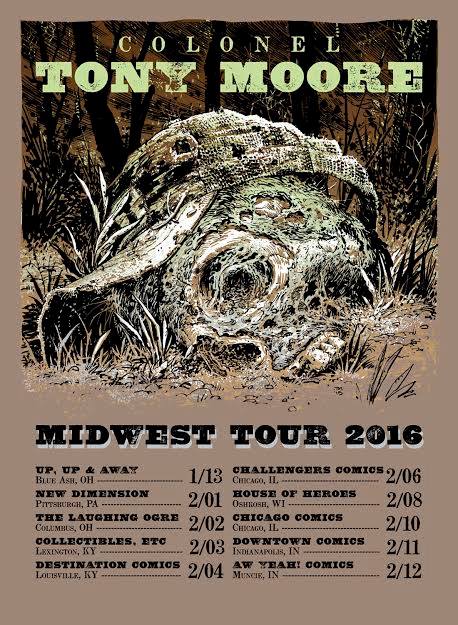 While the show is barely skimming under the 100 episode mark, “The Walking Dead” comic book is hitting its whopping 150th issue. And in honor of this feat, co-creator and original illustrator Tony Moore has returned to the series to illustrate the cover of issue #150.

We were fortunate to chat with Moore about his “Deadpool” covers, if he got misty-eyed returning to Rick Grimes, and the art of horror illustration (and whether or not he’s ever scared himself with drawings). So throw on your zombie swag and check out his answers below!

And hey, Chicago neighbors and Midwestern not-too-far-away neighbors! Tony Moore is going on a Midwest tour and will be here in Chicago Saturday, February 6th at Challengers Comics from 2-5 PM. Go say hi!

#150 for “The Walking Dead,” wow! How has the comic scene changed since the original comic started?

It’s crazy. Back 10 years ago, horror was proven non-viable. “Gritty superhero” was just about all that would float. Steve Niles’ 30 Days of Night had started to pry the locks off that door, and we came along and kicked it wide open. We had no idea what was in the zeitgeist, and we were lucky enough to catch lightning in a bottle. Even still, launching new creator-owned books was tough. My next book was with Rick Remender, called “Fear Agent,” which was an old-school space opera.

That thing was an uphill battle the whole way for us. Creators-owned was still a tough sell and sci-fi was far from in vogue. Slowly, tastes changed, and by the time we finished the book (almost 10 years later), everyone in comics was suddenly all about big crazy cosmic adventures, and audiences are starting to follow creators as much as titles. The internet has opened up people’s tastes in entertainment, or at least allowed a direct pipeline for creators to find their own sustainable audience without a lot of naysaying middle men gumming up the works. It seems it’s much easier to get books out there than it was.

Your 150th cover for The Walking Dead is nostalgic in so many ways. What was it like returning to draw a lead character who has developed so much?

It was definitely moving to revisit Rick grimes – and all the characters – after all this time. I spent a lot of time with these guys, I’d be lying if I said I didn’t get a little misty and nostalgic. I had cooked up a handful of other ideas for it, but then at the last minute, the idea struck me. I pitched all the ideas to the Skybound guys, and Kirkman said to do what I was most excited about. Seemed a little counterintuitive to do a cover with no zombies at all on it, but that’s ultimately what I think made it work. When the idea of using the reflections to show all the folks from the original crew that we’d lost over the course of the series, it just felt right.

I mean ultimately it HAS to be about the people. The zombies are the constant looming threat, and it’s great to see both zombies and humans getting torn to pieces, but the people are the heart of the thing.

You do a lot of touring throughout the convention circuit – how does it feel touring to celebrate the feat of the #150th issue of a story you co-created?

It’s great to see the longevity of the project, and i’m thrilled people are still excited for my art. It’s always great to go to new cities and meet people who have just now found their way to comics and the horror genre, and are excited to share it with their friends and enjoy the fellowship of fandom.

So much of what makes zombies, or any beings in the horror genre, scary is their gait and physicality. What are some of the difficulties of illustrating for horror comics? How do you make them uniquely evocative?

Well, in comics, you can’t get the “Jump Scare.” You can pace your story on the page to have surprises that reveal on a page turn, but that’s about it. What you need to do is make something that people think about when it’s over. Get under their skin a little.

When it comes to designing zombies especially, I try to present a little story. Who was this person? What did they do? How did they die? How long have they been wandering? What have they been doing? These are all things you can show right on the surface, and it makes you look at the monster and consider that it was once a human with a life, just like yours. Then you can pepper it with some great gore and really send it over the top.

Have you ever freaked yourself out while doing a horror illustration?

When I was a kid, I had a little projector I could draw stuff on, and I would draw monsters projected huge onto the ceiling above my bed at night. I’d do it until I made myself too uneasy to continue, then I’d lie in bed, staring into the darkness until I could calm down enough to sleep. These days, it takes a hell of a lot to get that kind of reaction out of me, but I do still find myself lying in bed at night contemplating some pretty terrifying things. Eventually, I’d like to try doing some really freaky concepts on the page. I love Asian horror for this, and I don’t really know much in the US that goes this direction.

Do you think you can get away with more when illustrating horror than you can in, say, film and tv?

Back when we started, I would have said “Yes, Definitely.” Things were still pretty straight-laced. But nowadays, it seems like there’s not much they won’t put on TV, especially cable. We still have weird hangups about nudity and sex, so you still can’t show the standard equipment we’ve all got under our clothes, but you can sure show someone getting their head turned inside out on primetime.

Both regarding your “Walking Dead” illustrations and your Marvel art, how do you keep TV Shows and Films that comics are adapted into – and there are so many now – from influencing your art?

I don’t know that I do. I don’t know that I could or really even would if I could. All the world is grist for the mill. I try to not fall into the trap of copying others, but if there’s a concept that I can appropriate and make it work for me, I’ll try to put my take in it and unabashedly make it mine.

I seriously dig your Deadpool covers. What are your thoughts on the whole “rating controversy” for the movie?

Glad you’ve enjoyed the covers. It’s a different set of muscles than drawing the interiors of a book, and I always have a lot of fun challenging myself to pull off some effect, whether it’s major or subtle, as they can be equal pains in the ass. I say “tough.” This is an instance where people are forced to reconcile content with active parenting.

Kids like superheroes. This superhero’s gig is to be crude and shoot people in the face for money. If your kid is already into his premise from the books, then it’s too late to start railing on the movie now. If he wants to see it and you’re okay with him seeing it, then just do it. I saw Rambo and Robocop and every horror movie under the sun when I was this kid’s age, and look at me! A model citizen, and productive member of society! 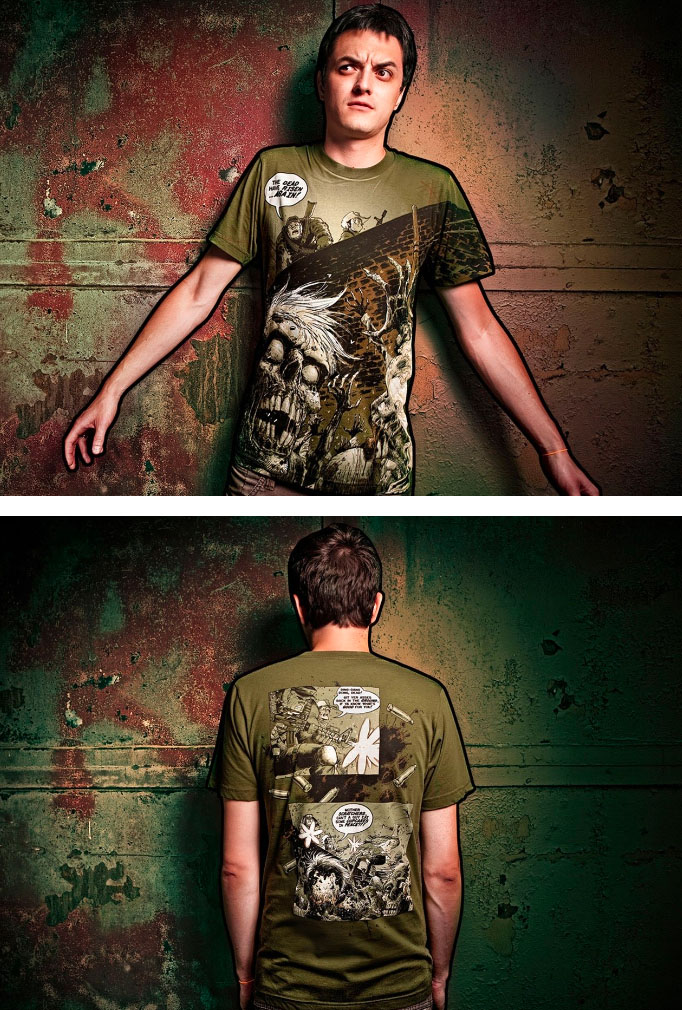 You did an awesome design for Threadless awhile back, a 6-pack story for Arcade Brewery, and a few rad album covers. What’s the creative process like for putting your art on a different medium than a comic book or cover? What non-comic-book object would you most want to put an illustration on?

Ultimately, its all about considering the format and medium, and tailoring the storytelling to fit it, rather than attempting to take a comic meant for the page and shoehorning it onto some other thing.  I haven’t really thought about what other items i could put stories on. I’m always trying to think of new things to put art on, but actual stories are a slightly different ball of wax. I’ll definitely have to give that one some more thought.

What current and upcoming projects are you most excited about right now?

At the moment, I’ve actually stepped aside from comics for a little bit, and I’m focusing on more of a Fine Art angle. I’m trying to paint more, and I’m going to be working on a lot of fine art silkscreen prints with my friend and hero Joe Petro III. Joe’s worked with a lot of legends, including Ralph Steadman and Hunter Thompson, William S Burroughs, Kurt Vonnegut, and even Willie Nelson. I’m thrilled for the chance to learn from him, and honored beyond belief.

I do however, still have a load of comics and stories i’m working to bring to life, and hopefully soon, I’ll have some new creator-owned stuff on stands. I’ve never fully written something for myself, so I’m exited about the prospect!