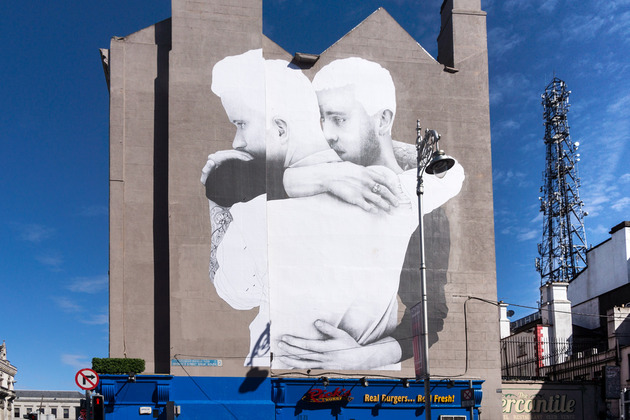 It’s a very special summer here in Ireland. Outside the window, things look pretty much the same as they always have. Right now, it’s midday. The sun in the sky fights an overcast regime; a struggle as old as the land. The crowds on the street are thinner than they will be in a few hours, but they’re still there, weaving amongst one another in search of lunch, a yoga class, the bus, or indeed, the dole office.

In the center of town, towering above the heart of all this activity, a wheat pasted image on the side of a heritage building has lost its face after heavy rains hammered it apart, leaving only a curious outline.

A couple of weeks ago, the image in its original form carried heavily in the heads and hearts of over a million people who showed up on May 22 to schools and churches country-wide to draw an “X” in a box and hope. May 22 marks the day Ireland voted in favor of marriage equality for all couples, irrespective of gender. Making history, the Irish decided no one in their country would ever forget the great push they endured to achieve fairness and love above all.

And art – stunning works of street art – abounded through it all as a reminder of what was really going on.

Joe Caslin is the man responsible for the piece in question. An Irish street artist, illustrator, and art teacher, he put an illuminating yet tender spotlight on the dismissed and belittled youth of the nation, which quickly center stage in the struggle for equality. Caslin, who up until now has focused his artistic endeavors on exposing the hidden realities of mental health issues among the young, has found himself – and his art – firmly cemented in Ireland’s history for an entirely different reason.

While campaigners against marriage equality for same-sex couples set up shop on street corners throughout the city and shouted their fear and shame rhetoric from rooftops and radio airwaves, LGBT men and women on their way to work or school looked up at Joe’s mural of two young men in warmhearted embrace and found camaraderie and hope. They were reminded – crucially – that they were not alone.

Removal of the highly visible mural was threatened, citing city planning violations. However, this was not the first mural of its kind to be erected by Caslin in Ireland, and no problems had ever been previously encountered. Over 15,000 people signed a petition to keep it in place before the storm claimed it.

At the vital center of every great change our species has witnessed, art has been present. This axial kind of creative output is so inextricably human, that as we examine at it, we look into the mind of its creator and find ideas and perceptions inside that reflect our own. Great art lets us know we’re not alone; we’re all in this together, and it’s okay to take action, to move forward.

When Saturday, May 23nd rolled around, the people of Ireland woke up, drank coffee or tea, brushed their teeth, got dressed, and then began making their way to the centers of their towns and cities. They gathered to hear broadcasts of the referendum results on pub TVs trickling out in excruciating dribs and drabs. Each win caused massive cheers, and the crowds began to swell, a beatitude in the air. By 6 pm, everyone knew: equality had indeed prevailed, and fears of fairness crushed beneath the boot of fear and misunderstanding evaporated into rainbows of conviviality.

A few weeks on in Ireland, and the veil has been removed. We know now where we stand with each other. We have chosen progress, and with the celebrations subsiding, we are left with the images, on our streets and our Facebook feeds, that helped show us the way forward. Art in Ireland burrowed into our consciences and held open the door to betterment. Good art, you’ll find, almost always does.