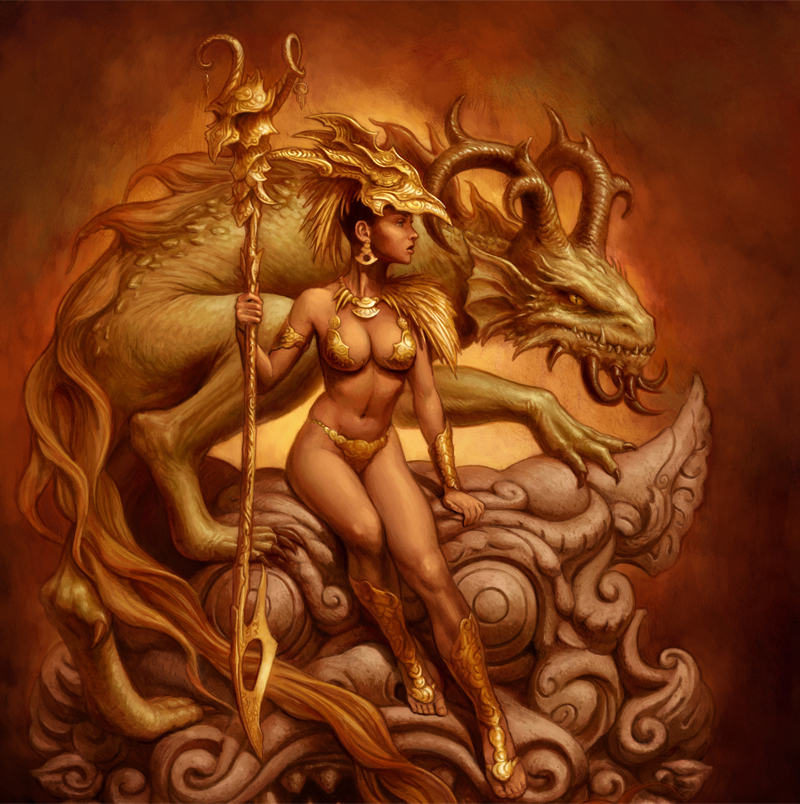 For our Surreal Fantasy challenge, we wanted a piece of art that transported us into a magical place. And Yannick Bouchard‘s “Dragon Priestess” does just that, while making us wish we all had our own pet dragon.

We talked to Yannick (a.k.a Moutchy) about his Dragon Priestess, surrealism, and comics. Check out the interview below!

This seems like it was the perfect challenge for you, as your site says that your art mixes fantasy and surrealism – how did you come up with this design in particular?

As always, for me it’s a very intuitive process. I have images and ideas popping up in my head, and I just draw very quick and crude sketches on scrap paper, first things that come to mind. If I like what I come up with, I’ll go with it. I usually find my idea pretty quickly, when I’m inspired by a subject.

For this particular contest, the girl and the dragon came to me naturally. It’s been done countless times before, but I felt like doing that, so I did.

I love how differently you’ve conceptualized a dragon in this image! Did you have a particularly different look you were going for?

Thanks! Uhm…no, I didn’t have a particular different look I was trying to achieve, but I’m glad if it does have its own style. I had fun with the horns, I haven’t seen many dragons done that way. For those things on its back and the tail, that was more inspired by Japanese dragons. I wanted the body to be massive and menacing, almost feline (thinking more of a lion here, not a cat). The front paws are almost like hands. I don’t know, it’s a sort of hybrid I guess.

I like the statue in the background as well – is it inspired by any architecture? It has kind of an Aztec-meets-Chinese-lion look to it!

Yeah, I was going to do something completely different at first, sort of platforms with decorative carvings. But when I was looking at images for inspiration, I found that big sculpted head, Chinese dragon/lion thing, and I liked it so much that I decided to do something similar to it in my design.

What world do you imagine this image is taking place in?

Something similar to the world of “Conan the Barbarian,” populated by sword-wielding heroes, sorcerers, creatures and demons.

You do a lot of cool commissions – what’s been your favorite commission so far?

Well, if I have to pick one, it would be King Diamond’s “Best of” album, “Dreams of Horror”. King Diamond is one of my favorite bands, so doing artworks for them is something really cool! I also did a stage backdrop for them last year, which was awesome as well!

I hear you like comics! What comics are some of your favorites?

When I was a kid, I used to read mostly European comic books, like Tintin and Asterix. Used to read tons of Archies too! I had a few Marvel comics as well, “Spider-man” and “Master of Kung Fu,” old stuff in black and white that actually belonged to my older brother.

What fantasy/horror stories and artists most inspire you?

Boris Vallejo and Julie Bell influenced me a lot! I also love the work of Frank Frazetta, gorgeous stuff! Drew Struzan is awesome as well! Lately, I discovered the work of John William Waterhouse, I just love his paintings! As for fantasy/horror stories, I’m a big fan of Stephen King!

How did you develop your particular style?

I think it’s a mixture of influences, between fantasy art and surrealism (especially Rene Magritte). I guess at first, you try to do something in the vein of artists you admire, trying not to copy their style though, but make it your own. With time it evolves and just becomes more natural and personal.

You know what, I’m not too sure. I’m a bit of a hermit, I work from home and I do pretty much everything from my computer, so I don’t go out much and get in touch with the art scene. We have a lot of galleries, but most of them sell mass appeal-oriented stuff. There are other galleries though, with more of a contemporary, conceptual, experimental approach, which I’m just not very familiar with. I think my art would find itself somewhere in between, so I’m not too sure where I fit in…

How do you get in the zone to dive into these surreal worlds in your art?

I kinda need to be alone, which I am most of the time during weekdays anyway. I listen to good music, and that’s it! When it comes to finding ideas, at the risk of being redundant, it’s just something that comes naturally to me. I paint what I like and what I feel like doing at that moment. Once I have an idea that I like enough to paint, it becomes a matter of rendering this idea into something tangible.

I thought your paintings were photographs. They’re SO realistic. How do you achieve this? How long does a typical painting take?

Thank you! At the moment, I mostly do commissioned artworks, so I paint when I have time to. Sometimes, it will take months before I complete an oil painting, because I can only work on it a day a week or so. So it just sits there patiently on my easel.

I’m actually taking oil painting classes right now (people make a funny face when I tell them that), learning to work with mediums, familiarizing myself with a proper technique. I pretty much learned it on my own so far, and there are lots of things I wasn’t doing right, so I should improve my skills a lot in the coming months!

There’s such a fine line between surrealism/fantasy and just silliness. But you really nail the genre beautifully. What do you think is the key to striking that balance, or what’s the key for you?

I don’t overthink this too much. I believe the important is to do something you’re comfortable with, that you feel passionate about, and it will shine through. That’s my approach anyway.