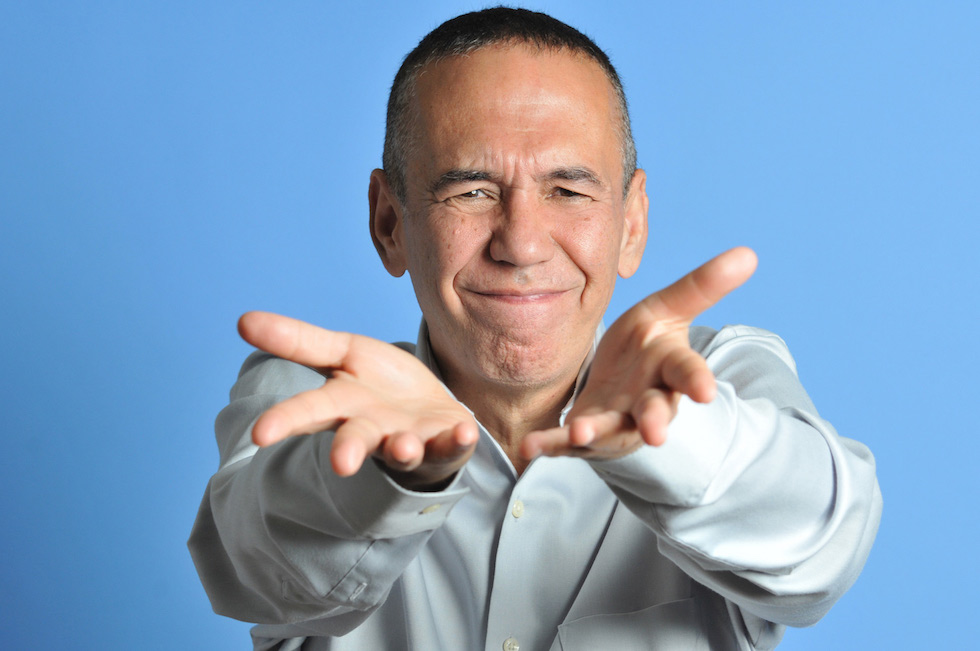 Unless you’ve been living under a rock for the better part of the last three decades, you know (and probably love) Gilbert Gottfried. You delighted in his sandpapery voice as Jafar’s sidekick Iago in the blockbuster animated feature Aladdin. You didn’t change the channel but actually watched the entire Aflac commercial just to catch his voice as the Aflac Duck, quacking the company’s name and starring opposite celebrities like Chevy Chase, Yogi Berra, and Yao Ming to name a few.

There’s no way you don’t know his voice. And you’re probably just as familiar with his face. He’s acted in movies like Beverly Hills Cop II and Problem Child, is the feature of a recent documentary film, hosts his own podcast interviewing famous artists of all kinds, and still performs his completely unique, audience-adored brand of comedy all across the states.

Gilbert’s been making people laugh for ages. The lifelong New Yorker has been performing stand-up since he was a teen with more credits in movies, shows, and noteworthy commercials than stars on the flag. The multidisciplinary comedian took a moment to share some life advice, comedy tips, and driving pointers in our recent conversation after the launch of his Artist Shop. Want to wear Gilbert’s smirking face all over a high-quality tee? Lucky for you, he’s got you covered.

You’re a multi-talented comedian, actor, performer, and artist with a prolific body of work (cast member on Saturday Night Live in the ‘80s, promos for the new at-the-time television network MTV, performances in Beverly Hills Cop II and Problem Child, the voice of Iago the parrot from Disney’s Aladdin, endless stand-up performances, and most recently, your own feature documentary to name a few). What has been one of your favorite performances or pieces of work so far? Why?

Well, all of those plus some others. I don’t really have a favorite.

When you started doing stand-up in New York City at age 15, what kinds of jokes were you telling? How did audiences respond?

Who were some of your early comedy influences?

I always get uncomfortable with that…I feel like influence is a nice way of saying plagiarism.

What comedians most inspire you now and why?

I don’t really watch comedians nowadays. Kind of feels like going to work on your day off…

Where do your ideas for new jokes come from? What does your process for writing new work look like?

I wish I knew where my new jokes come from. I would hang out there more often.

How has being a dad changed or influenced your work?

If one of my kids say a bad word, I can’t with a straight face tell them it’s wrong.

What do you like about interviewing and hosting folks on your Gilbert Gottfried’s Amazing Colossal podcast?

I enjoy reminding the audience that these people are still around, and we’re grateful for that.  It’s always nice when I get a message from a previous guest thanking me for all the renewed interest and attention in them and their career.

Of all the mediums you’ve worked in—stand-up, television, film, books, documentary—what’s your favorite? Which do you like working in the least and why?

I generally like any form that waves a check in my face, so I’m pretty open.

You’ve been a New Yorker your whole life. Tell us about the New York you know. Is your relationship with the city love-hate? Pure love? Disgust?

I can’t stay away from NY for too long because I start missing the smell of urine.

You’ve never had a driver’s license. So we thought we’d give you a quick permit test. A flashing red traffic light at an intersection means you should: A) Slow down before entering B) Stop before entering C) Stop and wait for the green light D) None of the above.

The answer is E: take a shot out of my flask, put my foot to the gas, and hope for the best.

How do you balance what inspires you and the projects you work on? What do you do to refresh your artistic passion when you’re not feeling inspired?

I usually refresh my artist passion when I count out the number of bills I have to pay.

What advice do you have for up-and-coming artists, comedians, or performers?

If you want to get lots of women, don’t become a comic. Start your own band.