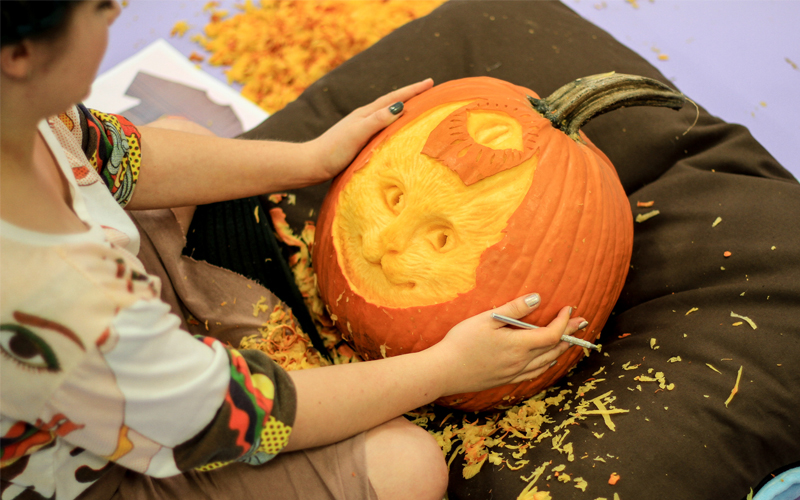 Pumpkin carving is one of those “expectations vs reality” things. You feel like you’re gonna to make an epic carving, when really? Carving a single tooth into the thing’s mouth is a challenge.

But for some people, pumpkin carving is a true art. And after meeting Carli Ihde, we’ve accepted that we don’t know jack about carving Jack-o’-lanterns.

We talked to Carli about her amazing pumpkin carvings and even got her to turn a few of our tees into pumpkin art. 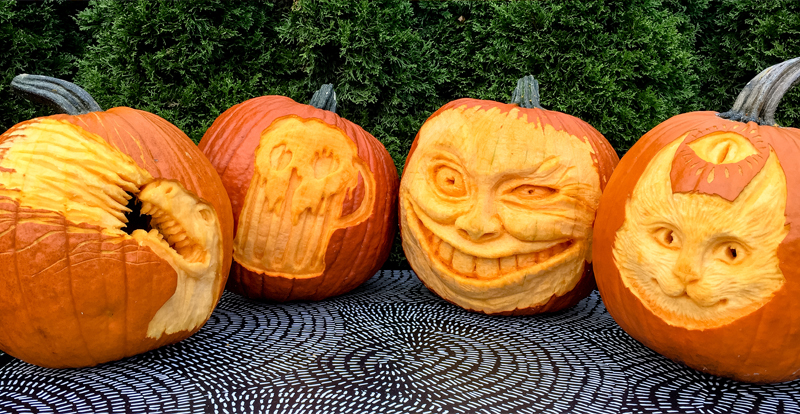 What do you do for a living?

I originally went to school for comic book illustration and have worked with comic companies like DC’s Vertigo and IDW where I have been published. My animations have been on TV shows and commercials, and I worked as a tattoo apprentice for a short time.

I’m currently working full time at a company called Truscribe – I work as an artist there illustrating dry erase board videos for advertisements.

Illustrating dry erase board videos is pretty much the best job I’ve never heard of. What kind of comics have you worked on? Any of your own?

Comic books are a great love of mine, but it’s hard to find the time for something so tedious. Comic book illustration is really a labor of love and I try to fit as much time in for it as I can. I’ve been in the midst of writing my own comic for a while now and I hope to one day make it into a web series. 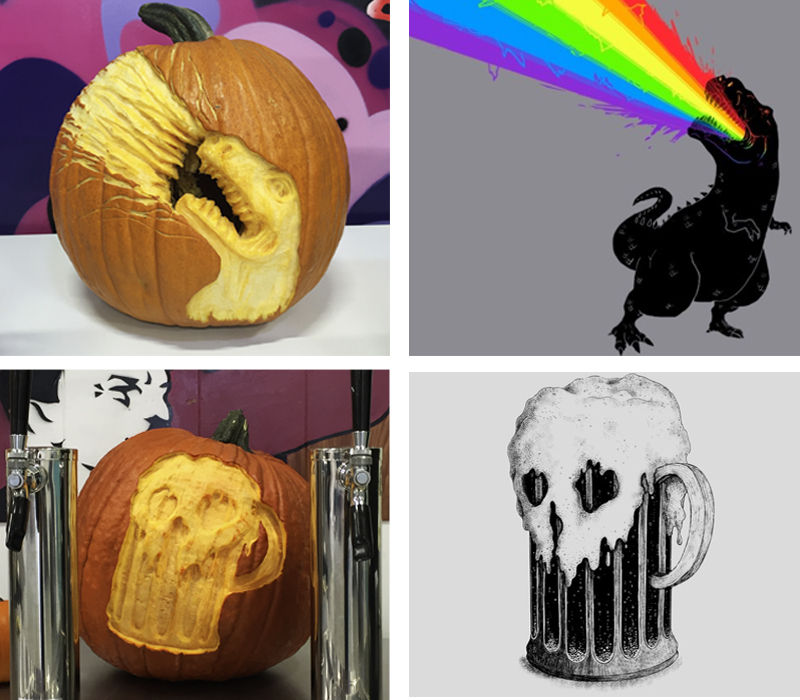 On to the pumpkin in the room…how did you get started in pumpkin carving?

I have a habit of picking up strange skills, many of which I taught myself. Pumpkin carving is one of those. I saw people do it before, and back in 2011 I tried my hand in it for the first time (what a mess). I’ve been slowly doing more and more of them during the fall season. What started off as a hobby has really become a source of pride for me.

Tell me about the carvings you did for Threadless. Did you choose the designs?

For the carvings I was able to do one pumpkin of my own design (the funny grinning pumpkin). 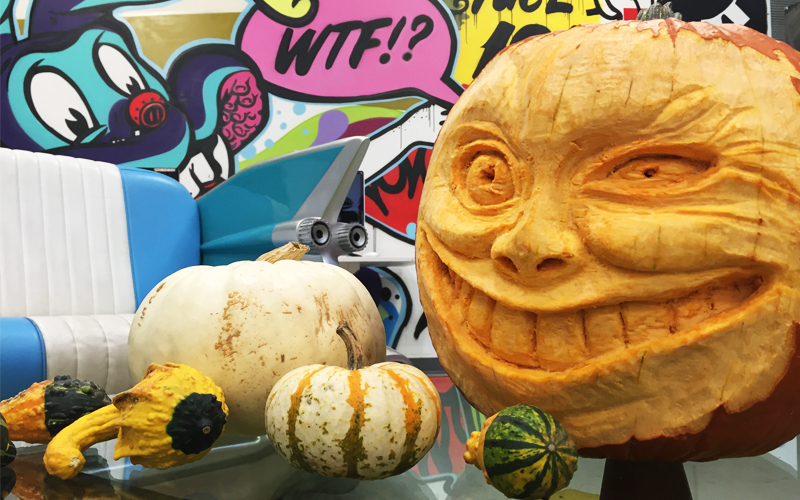 Together we chose three other T-shirt designs from the Threadless website to immortalize in pumpkin flesh…and by “immortalize” I mean “probably rot in a few weeks”, but you get the idea.

How long does each carving take you?

Depending on the size of the pumpkin, the hardness of the rind and the intricacy of the design, the sculpture can take anywhere from 1-4 hours. 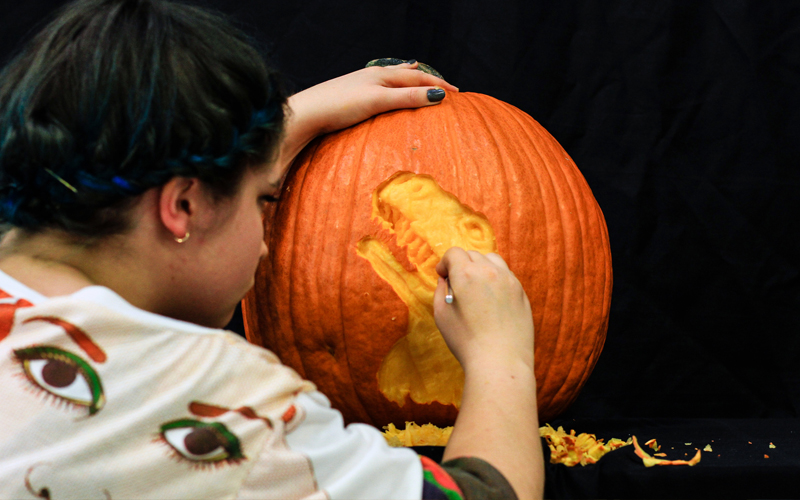 Have you ever carved one of those HUGE pumpkins? How about the tiny gourd ones?

I’m 4’11” so most pumpkins are huge compared to me. The the bigger the pumpkin, the thicker the rind is, so bigger really is better when it comes to sculpting pumpkins. I’ve never sculpted a little pumpkin…mostly because the skin is probably pretty tough for my tools and I’m not sure how deep you could cut down without breaking through to the center. It’s always worth a try though if big pumpkins aren’t available.

Do you have a stockpile of pumpkin seeds by the end of the season?

Ha, one great thing about big pumpkins is big pumpkin seeds. I think I pick up a new pumpkin seed recipe every year. I never get tired of snacking on them.

Do you draw your carvings first or just go for it?

I have never drawn a carving first, but I’m sure it wouldn’t hurt to plan it out beforehand. It depends on your design, of course. 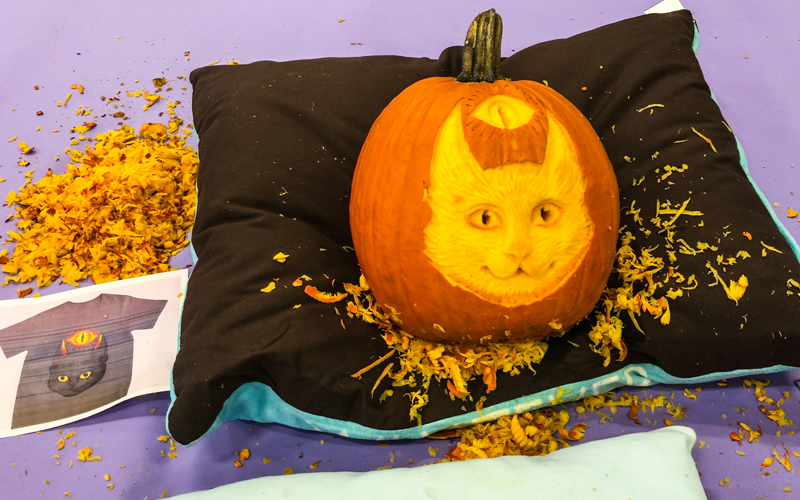 I had the Threadless t-shirt designs to reference for three of my carvings, so I was lucky to have that to refer to as I worked. Sometimes a sculpt just looks better when it’s not planned out though. Less sterile and more spontaneity.

Do you carve any other veggies (is a pumpkin even a veggie)? How do you keep from getting rusty in the “off-season”?

I’ve had the chance to carve designs into the rinds of citrus fruits for an advertisement. I’ve also been known to make realistic snow sculptures when the snow is at the perfect consistency.

I also like to sculpt my mashed potatoes into the shape of a giant mountain, because the aliens tell me to (is that reference still relevant?) But other than that I really don’t get a lot of chances to practice my art off-season. I just have to do as many as I can before the fall ends.