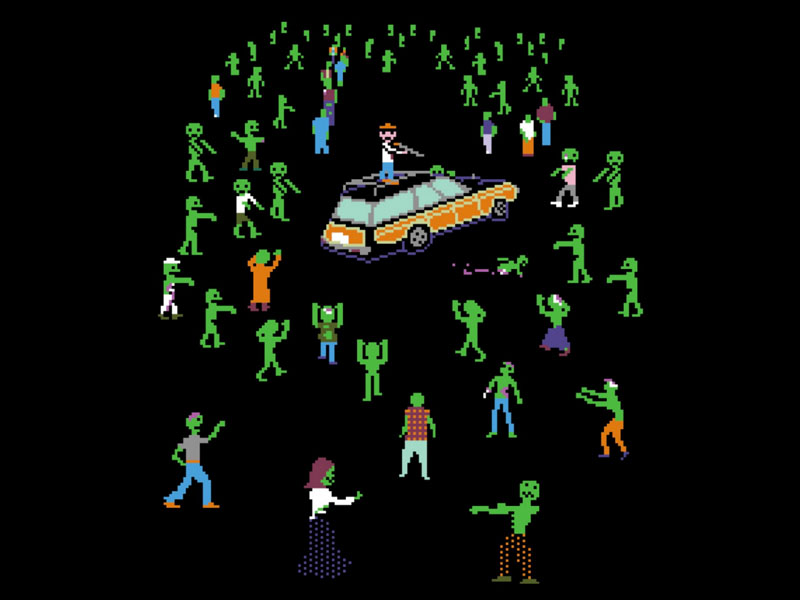 Here at Threadless, we’re strong believers that zombies make everything better. I mean, have you seen #ThreadTWD?

And the guys over at Hats Productions clearly agree with us. Because this Chicago-based indie game design team is best known for combining the childhood staple Oregon Trail with zombies to create a game called ORGAN Trail, swapping out a covered wagon for a station wagon and “dysentery” for “bitten”…and dysentery.

And now, these fellow Chicagoan creatives have opened an Artist Shop with us as well! We talked to Hats Productions about the indie gaming world, their Artist Shop, and, of course, zombies. Check out the interview below!

First of all, I’m a little obsessed with Organ Trail. Did you ever think the 16-bit zombie game would ever blow up like it has?

I remember when we first released the free flash version back in 2011 I turned to my team and said, “I hope 100 people play this.” Within a year or two, we had about 6 million visits to the web version. We’ve since released several commercial versions of the game across 8 platforms and have sold almost a million units to date.

I’ve been able to not only be fully independent for the past 4 years but I’ve also used the success of Organ Trail to help bolster Chicago’s indie game dev scene. I started a co-working space for other indies (so we don’t all go crazy working from out bedrooms.) That same company also started Chicago’s first (and best) indie game festival called Bit Bash. It’s always a huge success (and we often partner with Threadless. High Five!)

I’m sorry, were we talking about Organ Trail? I got a little off track. The point is: No, I never realized that a dumb little parody game would start an empire.

What do you think attracts people so strongly to Organ Trail?

It’s a parody of a game that pretty much anyone who grew up with a computer in the classroom is familiar with. It’s a game that we haven’t really seen in a long time and to be honest the source material isn’t actually very fun to play anymore. When players realize that we’ve taken a classic, infused it with zombies and modernized some of the mechanics; everyone is happy. Plus we’ve slipped in plenty of puns and zombie references.

I always like to say that we trick people into buying nostalgia and by the time that wears off, they realize they are actually playing a good game.

You had a rad live-action short film based on Organ Trail done to advertise the newer version of the game and expansion pack – tell me a little about these!

We decided to come back to the game after a year or so and put in all the features we never got to or didn’t think were possible to do before. The Final Cut expansion adds basically every feature anyone ever asked for, including two-player co-op, character and vehicle selection, tons of new enemies and encounters and the ability to choose your own route across America.

We also brought Organ Trail to Playstation 4 and Vita which has been really exciting for us. The Complete Edition (which contains both expansions) is the definitive version of Organ Trail and it feels great to feel like we’ve finally finished the game the way we always wanted to.

Since we knew that it would be hard to get press for an expansion and port of a three year old game, we decided to go all out making an amazing trailer with our friends at Imagos Films. The trailer is the perfect cherry on top of this whole adventure and maybe the coolest thing we’ve ever done. I think also helps legitimize our dorky little pixel art game.

What ‘many hats’ do you wear? Figuratively of course…or literally too.

They are of course figurative hats but after a few conventions and a lot of confused fans, I quickly realized I had better start wearing hats. You may now easily spot me at various conventions sporting a tall grey top hat.

However, the name was first devised because there were only three of us and we knew we would have to do a little bit of everything to pull off making anything worthwhile. We also decided that having a stupidly long name would both help us stand out and force us to never take ourselves too seriously. The name has been so well received we even released Max Gentlemen, a game about stacking hats, as an extension of our brand.

Besides, hats are fun.

What inspires your games? What’s your creative process?

Usually we sit around shooting ideas back and forth until someone makes a bad joke. Sometimes we make a bunch of prototypes and if something has legs we keep pushing it. We’ve also had to cancel a number of games in our time. There really is no set process, especially since the company keeps changing and growing. I think our games are driven by passion and if we find something we believe in, it will make it to market.

On to the designs! What made you decide to open a Threadless artist shop? Have you done apparel for your games before?

Yes, we’ve previously come up with shirt designs for Kickstarter backer rewards, and then we end up offering them after the fact (since our fans pretty much demanded it). 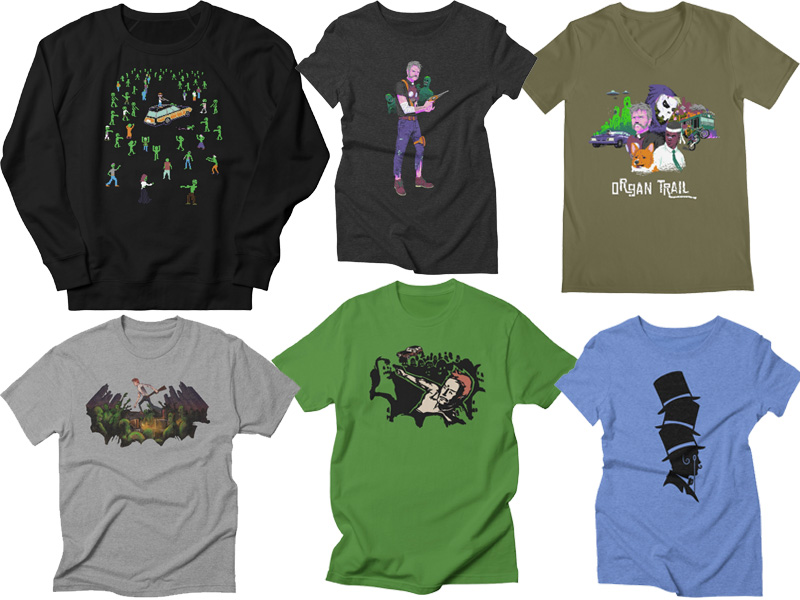 I actually love making “merch” for our games because it’s a nice break from game development and it’s something that we love and the fans love. It’s great to make hold something physical for something you love. I would honestly love to take some time out and make more designs if I can trick my artist into it.

You’ve got a couple different art styles going on in your shop! Did you all do the designs yourselves or did you reach out to other artists?

Some of style variance was determined by the design needs of the printing methods we used to use. The rest was because we actually just like to make posters and marketing materials in a variety of styles.

Since nothing in game is really pretty enough to put on shirt, it’s fun to interpret the game world with different visual styles when we need something big and flashy. Almost all of the designs are by our artist Benn Marion who also did most of the art in the game. 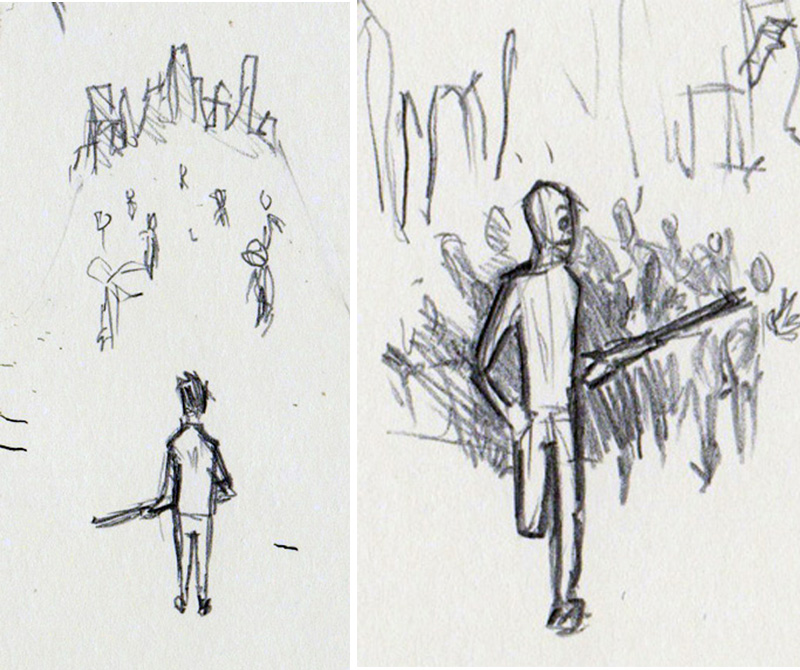 Do you guys do the art design for your games?

We often contract artists but we bring them into the team as much as we can. Sometimes I do art but the artists get mad at me when I do, haha. Our lead artist, Benn Marion, has been with us since the end of 2011.

That is a whole tech conference worth of questions right there. To be brief: It’s growing but it’s still really hard to make it as an indie. Seems like everyone is losing money to do what we love.

There are no guarantees of success and we are all struggling between passion and business. Luck is our greatest ally and we often turn to each other to keep pushing forward. I got lucky a long time ago and I’m doing what I can to keep that train moving forward but at some point I’m sure I’ll run out of money and someone else will have to help me to keep doing what I love.

That being said, I honestly could not see myself doing anything else for a living.

Do you guys have any other upcoming projects you’re excited about or projects people should know about?

We’ve always got about a-game-and-a-half in the oven. We’re currently very early on a project we’ve code named “Labyrinthium.” It’s a randomly-generated Playstation-1-style Resident-Evil-like game. We’re still very much trying to figure out what it is, but it’s been a big step up for us from Organ Trail.

You can keep an eye out for updates on our dedicated twitter @LabyrinthiumHat or follow the company twitter which is mostly me complaining about games and posting pictures of my corgi @HatsProductions.

Thanks for letting me ramble.