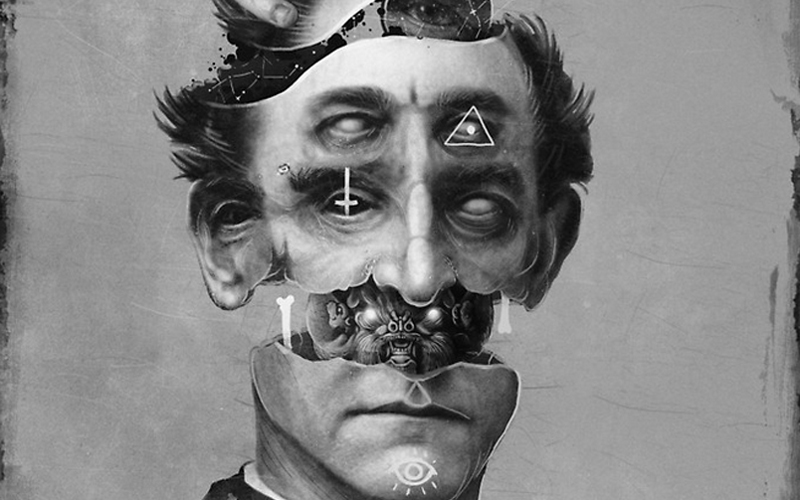 Likes to draw funny lookin’ weird stuff, could use a little crazy, and self-proclaimed disliker of cheese.

Besides being a description interesting enough to qualify as potential bff status, that describes the winner of our occult challenge, Mathijs Vissers, a.k.a “Demented.”

Besides making a fantastically creepy design, Mathijs dabbles in designs ranging from playful icebergs, to not-so-lame llamas, to a cast of freakshow characters way scarier than anything American Horror Story could ever do.

We talked to Mathijs about his wonderful menagerie of designs, oddities, and of course, his winning Occult design:

Tell me a little bit about yourself! What do you do for a living? For fun? On a Friday night?

Hi! So I’m Mathijs Vissers, I’m a freelance illustrator and designer from The Netherlands and I like making pretty stuff. And weird stuff. Mostly weird stuff actually. I work on awesome projects like festivals, albums, mostly music related stuff. That’s also partly what I do for fun.

Besides that I play soccer, I drink beer and I like watching movies and playing games. Friday nights are usually spent with either my friends at a bar or at home with my girl or some combination of those two.

You’ve had designs launch two weeks in a row! How does that feel?

This is an awesomely dark and multi-level design. What’s the creature in the dude’s head?

Thanks! The creature started out as a bat, but it’s more of a demon-type thing now I think. His name is Jerry, but he doesn’t talk that much so I’m not quite sure what he identifies as right now.

Understandable, we’ll give Jerry his space. The dude, though, looks a little like Abe Lincoln…intentional?

Haha, not at all actually, but I can see what you mean. I’m pretty sure he has spoken to Abe at least once though.

I can see that. This and your whole “Floating Freaks” series look like there could be a really cool story behind them. Is there?

They’re all part of a sort of traveling freak-show (hence ‘Freaks’). Based on those oddball collections of people you’d see back in the day freak-shows were still a thing, but a bit more surreal and impossible.

Using common human fears like the fear of spiders to evoke deep haunting feelings. The floating head part makes for an even more surreal look, sort of like they’re heads in jars you know? I still need to finish a few more of them before I’m done with this story I think.

So much of your art has to do with shifting perspectives – how did you develop your style?

To me it’s just interesting to take existing things and present them in a way you’re not used to. Remake em, remix em, whatever. I take a lot of inspiration from other artists and have a huge inspiration folder, filled with stuff I think looks amazing and things I wish I could make. It gives me something to work towards.

To learn things, I just kept on drawing. Sometimes you find a new tool, preset, or method, experiment with it to see what happens, and it just goes from there. Sometimes it’s a coordinated effort to learn something specific, sometimes it’s a natural evolution that just sort of happens by trying stuff.

How would you define your style?

That’s a tough one. I tend to follow a certain method for a while, then try something new – like I did with this design. Detailed, imperfect jittery lines, and you need to look at it more than once to see everything that’s in there.

But then again, sometimes I just create stupid silly stuff for the sake of it.

Can’t go wrong with classic horror films, but there’s some recent stuff that stuck with me for a while. Movies like Insidious and The Conjuring. I also really like movies that are not straight up horror but have a bit of mystery or fantasy going on. Like Pan’s Labyrinth – so strange but so good.

Yes! I love halloween, even though it’s not really a big thing over here. Kids don’t go around trick or treating, but there are some halloween parties you can go to.

It’s also a good excuse to watch The Nightmare Before Christmas every year.