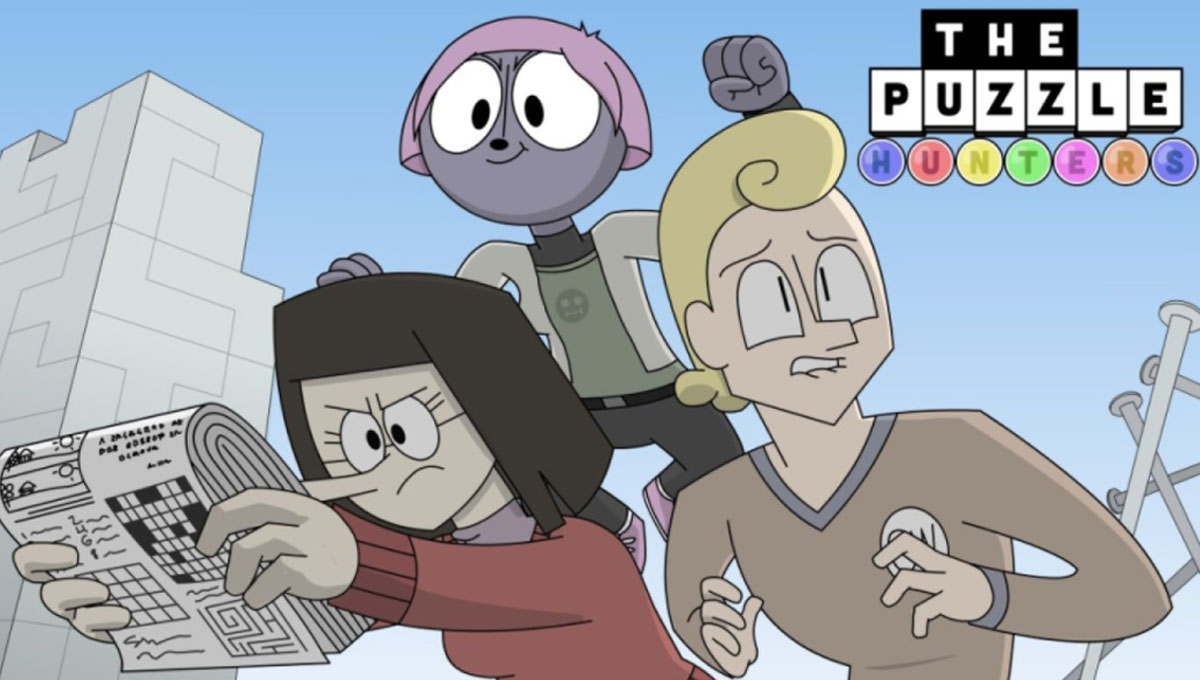 When it comes to being a Jack of all trades, Matt J. Wilson takes the cake. This independent animator has made it his life’s work to build his own YouTube network of cartoons, Cartoon Drive-Thru, which features four ongoing regular animated series – all of which Wilson animates himself (!!).

From shows that take weeks to develop, to creating a super timely and unique animated news show covering E3, the sheer number of animations that Wilson puts out is enough to inspire anyone to get off their butt (or, in the case of illustrators and animators, sit back down on their butt) and make their creative dreams come true.

We talked to him about how he balances all of his animations, his brand new Artist Shop, and about what advice he has to those who are thinking about becoming independent animators. Check out the interview!

First things first, tell us a little bit about yourself!

Hi everyone, I’m Matt. I’m an animator, I’m an obnoxious twitter parasite, and I make cartoons for me and for you and for anyone who would watch them and not run away!

Tell me about Cartoon Drive-Thru!  Do you do this full-time or just on the side?

I started Cartoon Drive-Thru in 2010 after having done a couple of professional animation jobs and needing to get out of the creative void that I had been trapped in for years. It started with a simple “Let me just try doing ONE thing, ONE cartoon”, which ended up being the first episode of Deadly Space Action. From there, I ended up doing two and a half seasons of it, covering nearly 30 episodes. Then I started to get that pang to create more and more, so I came up with other cartoon ideas, some of which had lengthy runs and some that didn’t make it out of the pan.

I do it full-time with the caveat that I operate well under the poverty line. It is not a glorious career path. Youtube is not friendly to artists, and especially ones that don’t have a significant audience, so I rely on Patreon income and the occasional freelancing to get by.

How many different series are you currently working on?

Right now there are four ongoing series: Deadly Space Action about an evil space captain and his indifferent crew, The Puzzle Hunters about puzzle detectives that stumble into and then fight crime, Sweet & Sour; a little show about two competing candy shops, and Princess Ness, which is a fantasy comedy about a con artist and her incompetent adventuring party that debuted this year.

I have other ideas but none have gone into production yet. Right now I’ve got one called Astrokatt which is basically if Don Quixote or Inspector Gadget was a magical girl. There’s also one called Go Ahead Make Us that is just a blueprint of a show about high school dropout delinquents trying and failing to reform themselves and help others. But an idea is nothing without a strong execution, and that is a stumbling block that sends a lot of ideas into the chasm. At the end of the day, I’ve already made many series, so I don’t beat myself up if a new idea doesn’t work out; there’s always more.

Tell me a little bit about your Artist Shop!

It’s basically just started, and I’m still working on designs for it. I’ve never been a merchandising-inclined artist, so it’s not something I really know how to do. The last time I did any merchandise was in the old days of CafePress, when the quality of shirts was not much better than doing it in your own house. So it’s something I really have to drag myself through. Anything that makes the process easier is welcome, so I’m glad that Threadless exists to handle the stuff I know nothing about, so I can focus on the stuff I barely know anything about.

How will the designs in your shop help you keep making your animations?

Quality of life is probably the most important thing. As supplemental income, that money can go to more than just bills, rent and groceries. If I’m happier, I’m able to work more efficiently. Being able to get out of the house and spend money on stuff that’s not just the barest essentials of living keeps me from becoming a withered husk. If that income can be substantial enough that I can put it back into the business, I would try to hire and pay other people to help make cartoons (and collaborate on them with their own ideas!).

How did you get your start in animation?

It was back in high school about 17-18 years ago when I first learned about Flash animation in a web design class. The first thing I learned how to do was recreate the characters from Dexter’s Laboratory and have them move around. From there, I experimented with motion comics, and then adventured into trying cartoons. Being of college age, I largely followed the webcomic trend at the time of making video game jokes. In 2006, I got my first professional animation job in New York and managed to carve out a small little career until about 2014 when I decided I wanted to focus specifically on my Youtube channel.

Do you write and animate every episode yourself? How long does it take to complete one episode of a show?

For most everything I do, it’s a one person show. I was in the right place at the right time to find voice actors to help out on Princess Ness, but with every other show on Cartoon Drive-Thru it’s just been me. A 2-3 minute episode of a cartoon usually takes about a month to make, but I like to wait until I have a batch of episodes to put up. For example, there’s a new four episode run of Puzzle Hunters that will be starting in July! I used to get them out faster but this also involved being a hermit and being chained to my desk, and I decided I wanted a better quality of life.

You covered E3 in cartoon form! How did you complete these episodes so quickly for timely coverage?

It’s rough! I start by writing material based on what I expect will happen at E3, and what games I know will be there. I use very limited animation, characters only in three-quarters perspective, simple rigs, and I spent one night just drawing hands and expressions to use later. So a lot of the animated material was finished right before the keynotes started. As the keynotes happened, I wrote down notes, and would think “okay, I can probably animate a reaction to this.” I also mentally set stuff aside to give out meaningless awards to as I watched, and saved that for the last day so that I’d have enough time to animate it.

One year I went overboard and worked with very little sleep to do about 20 minutes of very low-quality animation and really felt the effects of that for weeks after. Now I combine animation (about 4+ minutes’ worth in 2017) with narration over video footage, and the whole thing is about 15 minutes total, spread across three days. I was actually able to get everything out on time each day so I’m happy with that. It’s certainly not Studio Ghibli quality, but I’m at least happy with accomplishing such a quick turnaround.

What were a few of your favorite things from E3 this year?

E3 is usually a hot mess, so I was kind of surprised at how… inert…it was. The show is usually known for over-the-top hype and shocking reveals, but we didn’t really get any of that this year. I was pretty astounded at how solid Mario x Rabbids Kingdom Battle looked, and there are some indie games that really struck my fancy such as Gorogoa, Tunic, Yoku’s Island Express, Kingsway and Ooblets. But aside from Mario Odyssey – which I already am on board for – there was nothing that really grabbed my attention.

I think my favorite thing from E3 was the coverage itself. Giant Bomb had some great late-night chats, and Janina Gavankar was an amazing guest. Twitch’s Pre-Pre Show was a fever dream of kaiju wrestling and Jon Carnage consuming all of the universe’s energy and returning it back at viewers like an attack from any second-to-last episode of a Dragon Ball Z fight. A friend of mine got to be interviewed by Geoff Keighley! Griffin McElroy and Nick Robinson soaked in a hot tub and talked about Dilbert’s genitals. It was a very surreal year for E3 coverage, and I was deeply into it.

“There’s nothing like creating something from whole cloth, that YOU own, that YOU have the final say on, that no one can take from you. My cartoons will never have impeccable draftsmanship or lush backgrounds, but they’re still my cartoons and my characters.”

What advice do you have for fellow animators looking to get into independent animation?

Start with something small and grow from there. Don’t rewrite and rewrite and rewrite an idea until it’s perfect; just do it! Also, find like-minded individuals, see if there’s a Discord you can join, a community you can be a part of. Consider collaborations with your friends. But most importantly, keep your mind open to a day job, because income for online animation is almost nonexistent without a very, very large audience, OR a very, very devoted group of fans.

There’s nothing like creating something from whole cloth, that YOU own, that YOU have the final say on, that no one can take from you. My cartoons will never have impeccable draftsmanship or lush backgrounds, but they’re still my cartoons and my characters. There are very talented people out there – way more talented than me – who will only do fanart or video game parodies, and I’m here to say to them: you all have it in you to make something original and truly awesome. There’s no feeling like it. Even if it’s garbage, it’s still YOUR garbage, not someone else’s that you’re shackled to or that you can’t change or improve. I find that super empowering. I wish I found it financially stabilizing, but I’ll settle for empowering.

Don’t have an artist shop? Start one now!

Featured image is “Puzzle Hunters: On the Beat”.