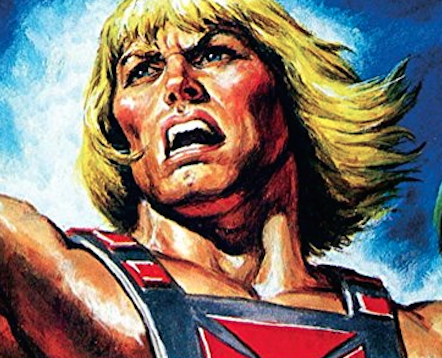 We’ve had a lot of Masters of the Universe on our brains lately, particularly in part to today’s launch of our MOTU Artist Shop featuring 24 awesome designs (yeah!). Aside from the launch, there’s one other thing we’re equally excited about: author Tim Seeley’s brand new book, “Art of He-Man and the Masters of the Universe”, which chronicles the entire epic journey of the MOTU cultural phenomenon! Since Tim’s such a cool guy, he sat down with us to talk about his brand new book and love for MOTU. Read on to find out more, and shop his new book here!

Awesome to meet you, Tim, and great to have you as a guest contributor! Why don’t you tell us a little bit about yourself?

Great to be here! I’m a comic book artist and writer who lives in Chicago, and likes beer and action figures. I have a long history with Masters of the Universe which has somehow translated into me working on the mini-comics, and the new “Art of He-Man and Masters of the Universe” book from Dark Horse comics!

What are your earliest memories of Masters of the Universe, and how did it influence your career as a comic artist?

On my fifth birthday, my grandparents bought me the combination He-Man and Battle Cat two-pack. I totally fell in love with the toys and the box art, and the “mom, please buy me this He-Man guy” era began. The mini-comics that came with the toys were the first comics I ever got, and I LOVED them… I read them until they fell apart, and it led me to pick up Spider-Man, Hulk, and other comics! Without He-Man, I’d maybe be a useful member of society!

What is it about both the art and story of MOTU that sets it apart from other comics?

I’ve always thought it was the flexibility of MOTU… it’s fantasy and sci-fi, and there are a lot of different iterations of the story. The cartoon had one canon, while the mini-comics had another. The figures were so cool, but totally basic too… they were up to the imagination of the kid!

Your brand new, super awesome book “The Art of He-Man and the Masters of the Universe” covers the epic journey of MOTU since the beginning. What inspired you to sit down, compile its history, and create this book?

Well, Dark Horse Comics had been talking to Mattel about doing the book for a long time, and I just hovered in the background, occasionally popping my head up to say “Um…I’LL WRITE IT!” When the deal was signed, I was on it like stink on poop!

Through your research for the book, what’s the one thing you uncovered that a) you didn’t know previously and b) surprised you the most?

There was a lot of interesting stuff… the original toy pitch document is fascinating, but I think one of my favorite parts is an excerpt from the MOTU movie script featuring bloody severed heads.

What are you most excited for MOTU fans to experience with “The Art of He-Man and the Masters of the Universe”?

I’m probably most excited by the beautiful reproductions of Earl Norem’s posters without any text or logos on them. They are goddamn beautiful.

Why do you believe MOTU grew to become, and still is, a timeless cultural phenomenon?

It’s the open-endedness of it… the vast amount of imagination it allows  fans to put into it.

What’s up next for you?

COMICS COMICS AND COMICS. I still write Revival for Image, and I have Deadpool vs. Thanos coming out from Marvel, as well as Grayson from DC.