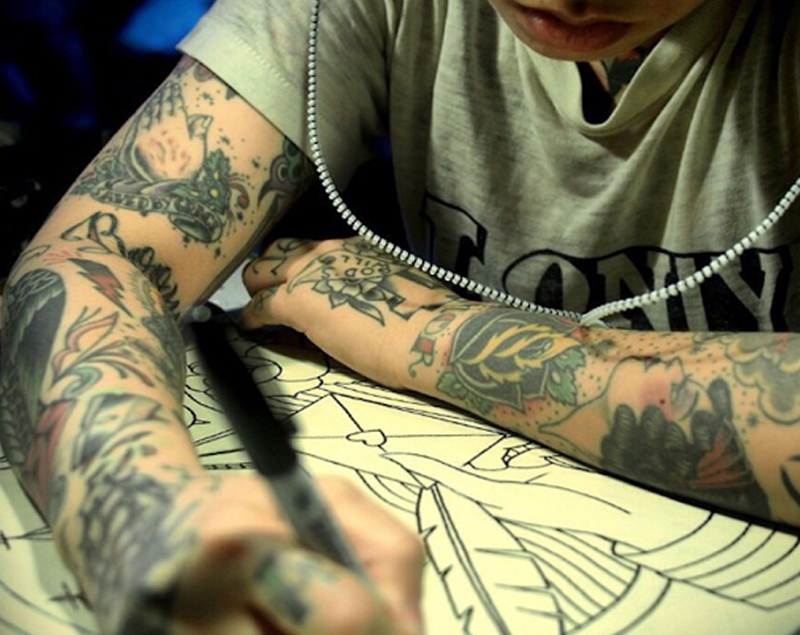 Riddle time: when you get a tattoo, is it art emulating life or life emulating art?

Tattoos are called “body art” for a reason. And Quyen Dinh has taken traditional Americana tattoo art from a skin canvas to a paper canvas with her “Parlor Tattoo Prints.”

But besides being a rad artist, she’s also one of the coolest people you’ll ever talk to. Between her immigration from Vietnam to America sounding more like a script than real life, to trading the film life for the artist life, she’s as badass as her tattoos make her look.

We talked to Quyen about her amazing life, ink, and her Artist Shop.

So how did you develop your tattoo style?

My tattoo style goes back to the early 1990’s when my friends and I started to get our first tattoos. We immediately gravitated to the traditional Americana style and some decided, at the ripe age of 16, to start tattooing. Although I didn’t start tattooing then, I was drawing up a lot of my own tattoos and that continued throughout my life.

Back then, references were taken from tattoo magazines and vintage flash. So the development of that style was very informal and usually consisted of me sitting on a couch in a tattoo shop somewhere sketching something up before a tattoo session.

Do you actually tattoo as well? 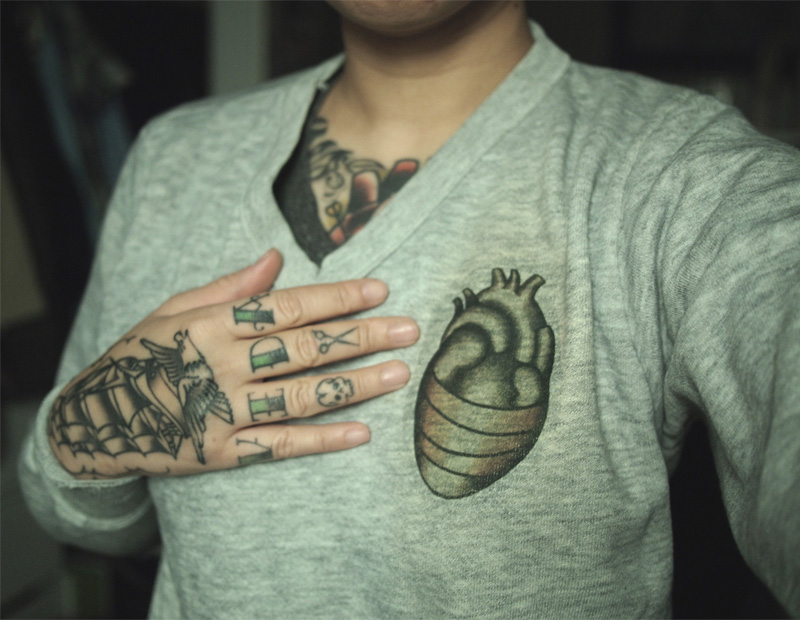 I do know how to tattoo, but I am not professionally trained. I have a respect for official training and apprenticeship in tattooing, so it’s not something I will do until that’s accomplished. At this time, tattooing is not something I want to pursue. But perhaps it would be an option in the future.

I heard that you’re self-taught, that’s amazing! How did you learn to draw such accurate faces of pop-culture icons?

Thank you! When I was a younger artist, I preferred working with charcoal and graphite and drew nothing but realistic portraits of celebrities, much like the ones you see in dusty corners of shopping malls.

Realism teaches you that drawing an eye isn’t about lining out an almond shape and putting a circle in the middle of it. Instead, it’s about picking up the different shapes of values that make up the eye. For an artist learning this, it helps to turn a portrait upside down, which forces you to draw what you actually see rather than what you think you see.

Do you have a favorite tattoo of your own?

The ones on my hands by my good friend, Carlos Aguilar!

Word on the streets is that your move to the U.S from Vietnam is an amazing story.

It’s a pretty wild story. For those who haven’t heard, my family and I escaped Vietnam back in the late seventies after the fall of Saigon. It’s one of those harrowing stories that, with the right writer and director, could be made into an Oscar-winning drama and thriller filled with pirates stealing gold and female innocence, boats forever lost at sea, dreams of divine intervention, and, finally, miraculous rescue. I’d often fantasized about bringing that particular story to cinema because it hasn’t been told in a feature film before; and it certainly needs to be.

Speaking of film, you originally wanted to go into the film industry. What changed your mind?

The biggest thing was that I became disillusioned after graduating. I believe I was a good story teller and a good filmmaker. My teachers tend to keep my videos as reference for future classes, but none of that meant anything then because Hollywood was – and still is – a very closed industry. It really helps to have connections and I’m such an introvert that that was an issue. 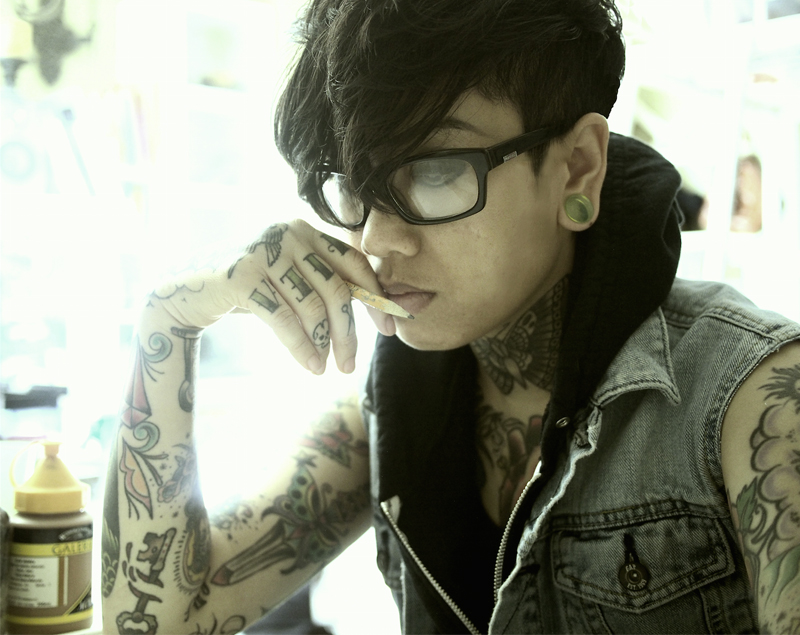 Also, I wanted to do social documentaries and those kind of films just weren’t popular enough to be picked up and financed. I felt the odds against me, but more importantly, I had a bigger passion for art. So right after graduating in 2004, I pursued art. Though, I still long to make a film and brainstorm ideas from time to time. And with today’s media climate, it would be much easier to reach an audience, so you might just see a film by me one of these days.

You have so many cool, pop-culture-centric tattoo prints . What are some of YOUR favorite movies?

I would marry The Walking Dead if it were a person! I just love anything horror and science fiction. The Shining, Aliens, Shaun of the Dead, REC (Quarantine), and the remake of Dawn of The Dead are just some of my all time favorites.

So on the art side of things, what attracted you to Threadless Artist Shops?

The fact that every single design from every artist is professional and aesthetically appealing to me personally. I can’t say that for any other venue. There are a lot of talented folk here!

Do you get a lot of people telling you that they got one of your designs as a tattoo? How do you feel about it?

Oh yes…daily. For a long time and even now to some degree, it hasn’t registered completely. It’s been very surreal. I think the best time to ask that is 30 years from now when I’m looking back at everything from a distance, it would be incredible.

What medium do you use?

Mostly digital now, but before that it was mostly acrylic and some ink and some watercolor.

Although I’ve been the hardest and most micro-managing boss I’ve ever had, it’s been a dream come true. A long day would be painting during the late night hours to morning. Posting my new painting to the social networks around 7am. Getting some sleep between 9am to 12pm. Then processing orders from 12:30 to about 4pm. I was doing that almost daily for the first couple of years. It was intense. I’ve been nicer to myself in 2015. 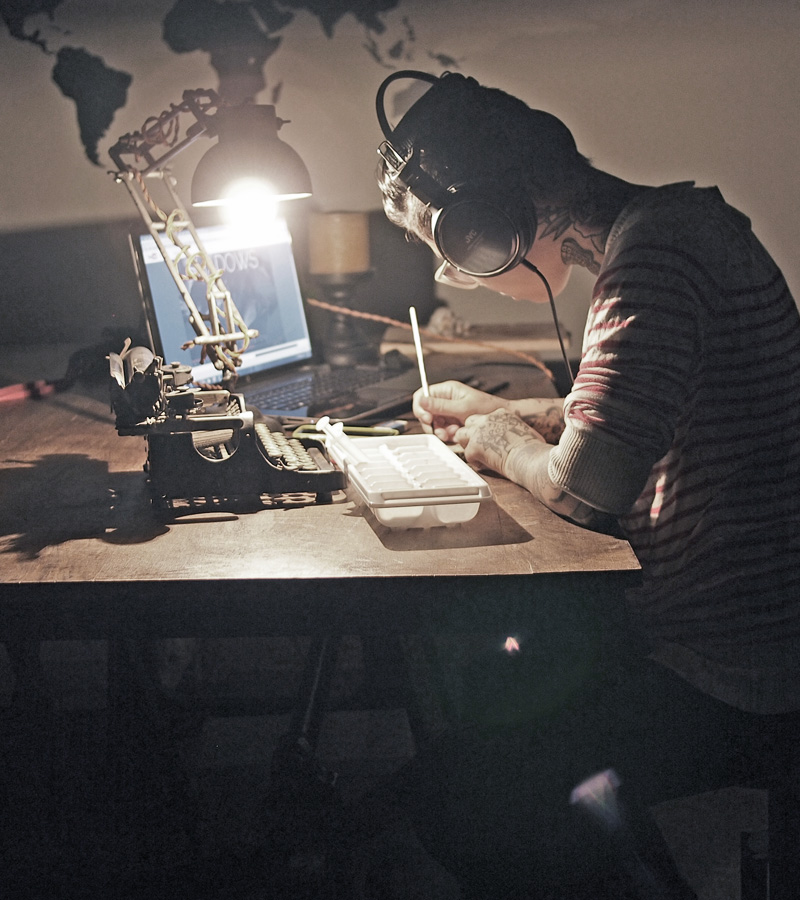 What are some things you want to do in the future in the art and/or tattoo world?

The future is so wide open that I really don’t know yet. I may want to continue to run my shop and business, I may just design by commission, I may tattoo and/or own a shop… or I may just move to Europe and be a vagabond! Whatever the case, I’m excited to be surprised.