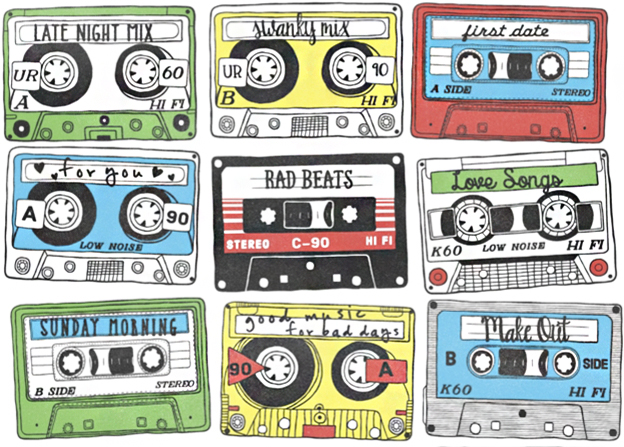 First time staff-member blogage! Not many of you know me, as I quietly take part in our Product Team making sure we’re able to launch all the designs for ya weekly. So, a little introduction: I like stuff and food and you.

To put my appreciation for all things music to good use, I’ll be posting Monthlies to give ya a taste of some musical delicacies inspired by selected designs launched the previous month.

I’m a bit old school, but no apologies. Scope it all out below and enjoy!

“Rollin’ with my Homies” – Coolio

Been awhile since journeying with Cher and the gang (and that ageless wonder, Paul Rudd). Choice song off of the soundtrack is this Clinton era, give-no-shits, funk-heavy, hip-hop jam (don’t forget Brittany Murphy’s memorable scene).

A cultural phenom in the ’70s and ’80s, roller rinks were disco-funk havens, providing slink and sway on skates. Dazz Band’s “Let it Whip” came to mind immediately when folks got their boogie on.

My knee-jerk reaction was to post some traditional campfire jingle, but I think those are for fuddy-duddies more fuddy-duddy than I. There’s an immediate joy to this love song about the beautiful redwoods of the west coast. It embodies how one can feel in the majesty and permanence of this country’s national parks.

Also Check: “This Land is Your Land” – Woody Guthrie (this is a no-brainer)

“Asteroid” sounds like a modern day trek through the scorched earth with a dash of impending doom. A 4:48 minute journey visualizing that face-melting haze. Make sure to stick around ’til the end.

“Always Look on the Bright Side of Life” – Monty Python

Spoiler Alert: captures that tongue-in-cheek associated with death…the whole being dead part. Immediately thought of this Python (Eric Idle) treasure. We’ve got a long way to go before the grave (hopefully), but even when it’s here, ya gotta have a laugh.

Look at those adorable #1 hands on that amped up T-Rex. Anyone who’s been to any sporting even has had some good fun with The Isley’s R&B romp, “Shout”. It’s essential winning or comeback building music.