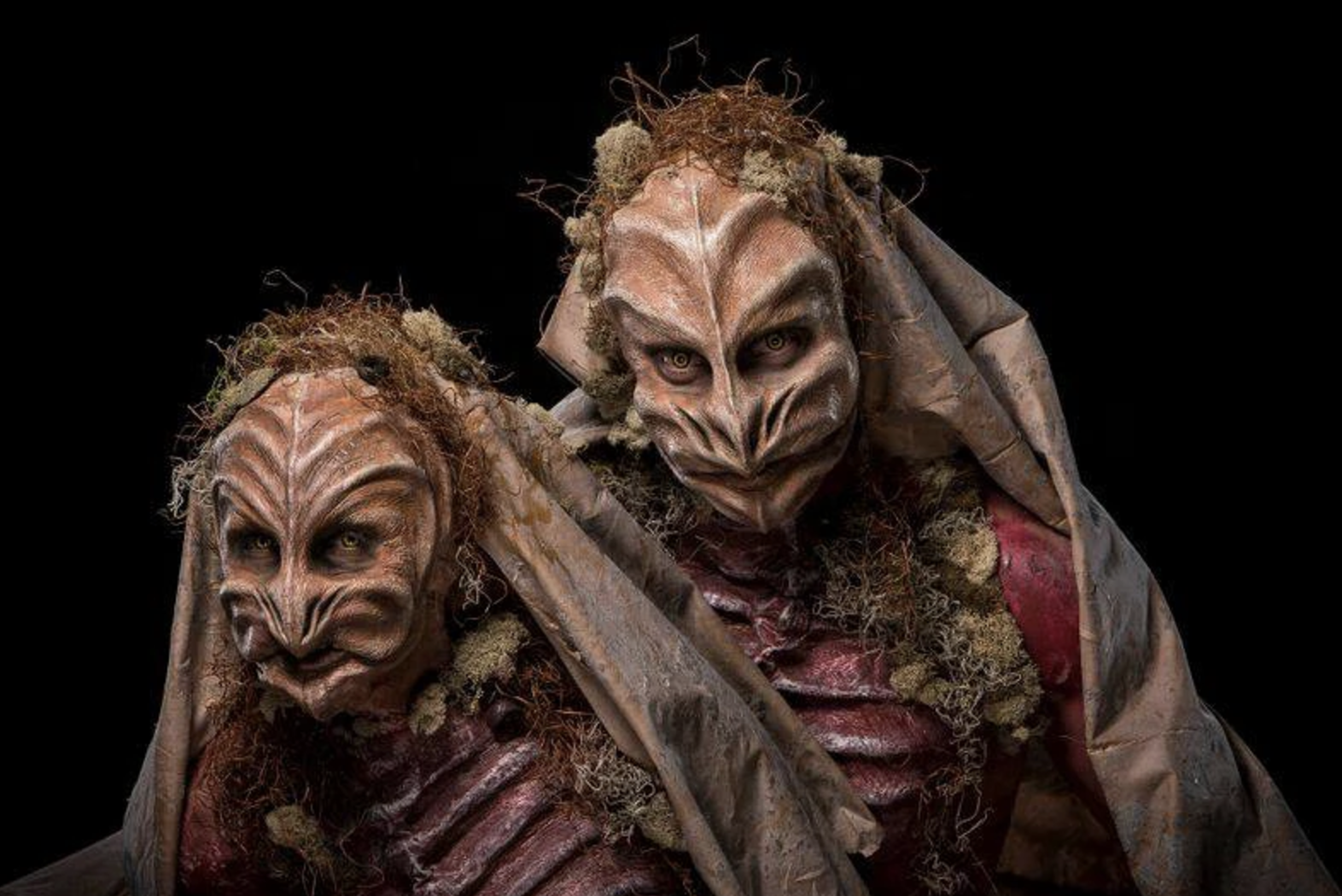 No matter how advanced CGI gets, there’s just no substitute for the charm and awesomeness of practical effects and creature makeup. And it’s people like monster makeup artist Jason Henricks who bring the creatures that exist only in our imaginations to life. Having shown off his amazing creations on season 9 of Syfy’s hit show Face Off, Jason knows a thing or two about creature makeup, and we just had to find out more about what he does!

We talked to Jason about what movies made him first fall in love with creature makeup, about his time on Face Off, and about his new digital art work that appears in his Artist Shop! Check out the interview below!

Tell us a little bit about yourself! How did you first get started doing creature makeup?

I’m just a small town kid from Eastern Oregon who stumbled and fumbled his way around the state, and currently living it up in Los Angeles. I’ll spare you the long rambling tale of an ex-cowboy making boring decisions while trying to figure out what to do with his life after discovering there was a world outside of the ranch he grew up on. I’ve been an artist in one form or another my entire life, but I didn’t really ever think of it as a way to make a living until the last decade or so. That was when I started to paint more and had a couple of shows. When I sold my first painting, it gave me the push to explore even more. I started doing commissions on the side. I have only been doing freelance artistry full time for the last 8 years or so. It took me a while to find my way to Makeup fx.

You were on season 9 of Syfy’s Face Off! That’s amazing! What was that experience like?

Thanks so much! It was unlike anything I’ve ever experienced before on so many levels. Above all, it was exhausting haha…It was pretty awesome. I’m a weird loner artist, so getting to hang out and work with a bunch of other weird loner artists was so much fun. Everyone was so talented and had such a passion for what they do. I’ve never been so inspired in my entire life. Then, to be turned loose in the lab and have access to basically any supplies we could want or need to bring our ideas to life? Talk about a dream come true!

It could get overwhelming, though. When you have so many options, you can bite off more than you can chew. I walked away with a killer group of friends, though. Our own little Face Off family. I still talk to at least a couple of my castmates a week. Would jump at the chance to work with any of them again.

When did you first get interested in doing creature makeup?

I’ve always loved Halloween and costumes; I jumped at any chance to dress up. Watching American Werewolf in London was the first time I became aware of what makeup fx even was, and I never in a million years would have thought of it as something I could do. Fast forward many years; I was working in an office in San Francisco. The job was great; I worked with wonderful people and it paid well, but it just brought me down. Everything else in my life was awesome, but my unhappiness at work was starting to change that. So I started to make lists. So many lists. Lists of all the things I wished I was doing, and what my heart was saying. They all kept coming back to makeup fx. So I went to the important people in my life and said I needed to make a change. With their support, I found a program, quit my job, and turned my life upside down. It’s had its ups and downs, but I couldn’t be happier.

What are some of your monster makeup inspirations from movies and shows?

American Werewolf in London, as I mentioned, especially the dead best friend character. His continued decay as the movie progresses is just glorious. Rick Baker’s work in general is inspiring, from Harry and the Hendersons to the Thriller video, I grew up idolizing his work. Same with Dick Smith’s work on The Exorcist, Little Big Man, and beyond. I think a lot of my fascination with aliens and fantasy comes from Michael Westmore’s run on Star Trek: TNG, and Deep Space Nine.

Currently, nothing compares to what they’ve been doing with American Horror Story. Eryn Krueger Mekash, her husband Mike, and their entire team bring such amazing visuals to the show. It brought me back to wanting to create some truly horrific monsters and mayhem.

I prefer the real life challenges. Like turning a 6’2″ drag queen into the girl gremlin with proportional boobs and ears that don’t weigh too much to perform in. Or applying a horde of zombie makeups by cell phone light at 4 AM on a park bench when the makeup trailer doesn’t arrive.

What’s the most challenging creature makeup work you’ve ever done?

Every job has its challenges; some just require you to think out of the box more than others. Usually it’s something you can handle, like a last minute recast or an adjustment to the schedule. To date, I have never had more challenging makeups than the ones on Face Off. I prefer the real life challenges, Like turning a 6’2″ drag queen into the girl gremlin with proportional boobs and ears that don’t weigh too much to perform in. Or applying a horde of zombie makeups by cell phone light at 4 AM on a park bench when the makeup trailer doesn’t arrive haha

Have you ever had a dream about your own creatures? Do you have stories for any of your creations?

I’ve had dreams where I’m working on makeup, sometimes correcting things that I perceived as mistakes in the actual application. I never have dreams about any of the creatures as if they are real, most likely since I never really see anything I make as a creature or monster. To me they are just artwork, I see the paint strokes and the lines of the sculpt.

Most of my creations do have backstories, however. I’m real big on that, it’s how I workshop the design. I need to know where it lives, what brings it joy, and what it eats to help guide my way. It’s the little things that drive the character. I would have whole elaborate stories to go with my designs on the show. That’s just my process.

You say on your site that you’ve recently started to focus on digital artwork and figurines/decor. What made you shift to this medium?

I’ll never fully move away from set work, I just want to stretch my creative muscles and explore a bit. I had taken to drawing my concept art and face charts digitally, and the more I played with digital painting the more I enjoyed it. That led me back to designing, so I married the work I was doing on the tablet with my Photoshop and Illustrator skills, and have been exploring that. I’ve also been learning how to sculpt digitally using the Zbrush program, which allows for you to 3D print your designs. It’s allowing me to explore creatures and monsters that are further removed from the humanoid form than I can get with makeup fx. Plus, I really just like having strange things in my house. I love the idea of coming up with figures/artwork/decor with an otherworldly tilt.

You have an Artist Shop with us too! Tell me a little bit about the designs in your shop!

Most of my designs come from not being able to find what I’m looking for elsewhere! I wanted a sexy witch shirt and nothing really grabbed me, so I came up with my own. Same with the werewolf and even the pumpkin. Because of this, it’s a pretty eclectic offering, though I do have a few new Collections in the works.

I do think it’s pretty cool that at least a few other people have felt the need to bring a little bit of my crazy into their lives. I’m glad someone else in the world feels as much of a need for a sassy unicorn beach towel or skull throw pillow as I do.

Your designs have a super halloween theme going in your shop! Do you do EPIC costumes for halloween?

It is my favorite holiday, but it’s also one of the busiest times of year for me, so I’m usually working. This last Halloween was the first I had off in years. We went dressed as Buffy Fan Fiction, where Buffy and Willow both get turned into vamps…and are a couple, too! It was a blast. I was Willow, of course. I’m still not booked for this coming year yet, so maybe I’ll get the chance to dress up again. If so, I want to go all out. Alien bounty hunter and their captive, perhaps. I want an excuse to build some armor and a laser gun.

Finally, you have perhaps the greatest self-description ever: “the hypothetical lovechild of Dr. Who & Farscape, raised on grindhouse films backstage at a drag show”. I gotta ask…who’s your favorite Doctor?

Go for the tough question, huh? Haha…First off, thanks. People tend to ask me to describe my aesthetic, and that seems like the most appropriate description of what I tend to create. My favorite Doctor…well I was introduced to the series on Eccleston, so dark and brooding 9 will always have a soft spot in my heart. That being said, Tennant will always be my Doctor. There is just something so perfect about his interpretation of the character. He’s brilliant and broken, and plays the weight of his age and experiences in a believable way. Bill Potts is quickly becoming my favorite companion, though. Would love to see an adventure where those two match wits.

Just that I have a lot of fun and different projects of the horizon, so make sure to follow me on Instagram for all the latest. That’s where you’ll find recent additions to my Artist Shop, pics of my current projects, a selfie or two, and way more photos of my dog than there probably should be. Inquiries on commissions, rates for productions, and general messages of good cheer welcome through my website.