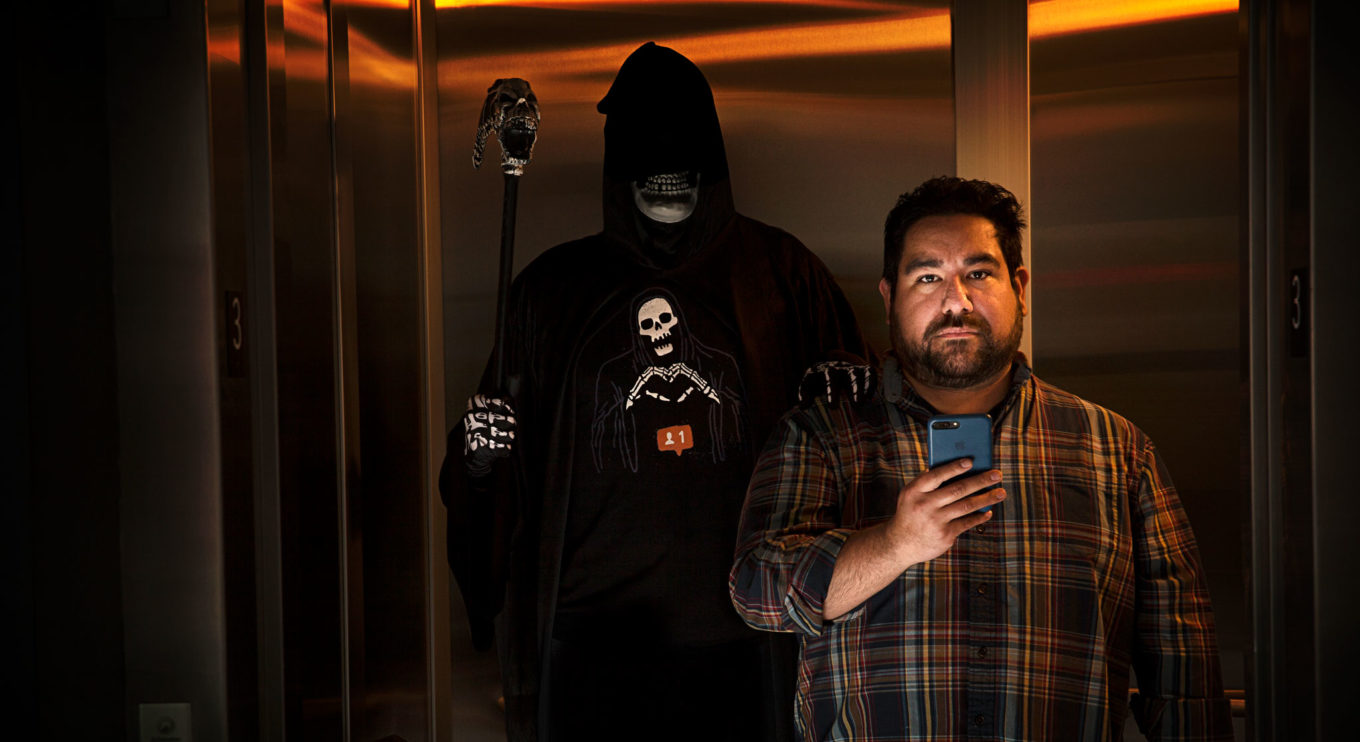 No matter how many times you say it, you probably still run up the stairs after turning off the basement light. You might even skip a few steps. Regardless if you believe in the paranormal or not, there’s a good chance you at least know someone who claims to have encountered a supernatural presence—be it an apparition or poltergeist.

I myself have a recent memory that still gives me goosebumps. A few years back, I was lying in bed trying to take a nap. I randomly opened my eyes and saw a window form on my ceiling, and behind it, there was a man staring back at me. I immediately jolted out of bed and ran out of the room in disbelief. It took all of the courage I had to go back in and see if my mind was playing tricks on me. When I looked up—just a blank ceiling. That’s where the story should have ended, but it didn’t. Weeks after I had that strange vision, I received the news that my neighbor passed away in the apartment unit below mine, and his body had been there for weeks before anyone found him. Yikes.

In the spirit of Halloween, as dusty old Ouija boards come out of closets to summon those who’ve crossed over into the afterlife, I asked Threadless artists to send me paranormal stories of their own. What I received was truly bone-chilling.

“I create dark art,” says Croatian illustrator von Kowen. Her detailed depictions of skulls and occult imagery are grim reminders that death is inevitable. Below, she remembers a late-night encounter she won’t soon forget:

“It was around 3 a.m. when I thought I saw something slithering from a crack in my bedroom wall. Thinking that my sleepy mind was probably playing tricks on me, I tried to roll over only to find out I couldn’t move and felt like my mouth was wired shut, preventing me from screaming. I felt like an invisible entity was crushing my chest and sucking the blood out of my body, draining the life out of me, rendering me powerless. I woke up in a cold sweat, petrified, but when I looked up I saw it—a grotesquely disfigured creature on my ceiling with its head on backwards and blood dripping from its sharp, half-rotten teeth. Some call it “sleep paralysis” but I still think it was an evil entity, a nighttime demon known in these parts of the world as a MORA.”

Pigboom gets an unlikely visitor from across the street.

Oregon–based Pigboom carves himself a spot in our minds with an eclectic style that shifts from lighthearted and comical to strange and grotesque. Here’s his paranormal story of an unwelcome guest:

“I slept in late and dreamt that I was about to leave the house when I saw the tall, dark figure of a man approaching me. It felt so creepy that I woke up suddenly, but I could barely move or even open my eyes fully. It was a bit of a blur, but again, I saw another dark figure. This time it looked like a woman with long, wavy hair, and she started touching or holding me. I tried to kick my leg and scream with no luck, and then I was finally able to move and get up. This happened at my old apartment located across the street from a cemetery, and it still gives me the creeps every time I remember it.”

Deniart is a lifestyle brand led by an independent artist who draws inspiration from the dark arts, occult symbolism, and the surreal. Speaking of surreal, he tells us of a strange paranormal occurrence that left him startled:

“When I was a child, a woman with long black hair and a white dress came through the half-open door of my bedroom one night. While I was lying and paralyzed in bed, unable to move my body or close my eyes, she walked slowly to my side. She stopped beside me and ran her hands over my body, without touching me. After a few moments she left the room the same way she came in—walking backwards always facing me. I pray to this day that it was just a nightmare.”

Skulls Society tells us how to summon the dead.

Shrouded in mystery, Skulls Society is a collective of archi-designers who create scholastic artwork from an undisclosed location. One of their artists emerged from the unknown to share a ritual they performed as a child:

“When we were kids, we used to summon ghosts with a ritual we learned from our older friends. First, you stand barefoot on the dirt floor of an old basement in complete darkness. The only light allowed must come from a lit candle. In one hand, you hold an item that belonged to someone who died, and in the other, you hold a book of folklore songs. Then, you read out loud a song about creatures called ‘matsuro,’ which are unbaptized children who’ve died and rise from the grave to join other dead children. They clap and roam by night, and you can recognize them in the dark because they have a small flame above their heads. After performing that ritual, I have never been so scared in my life.”

Ibyes has a nightmare that follows him into the real world.

Ibyes turns pop-culture references on their heads with bubbly, cartoonish illustrations and an insatiable hunger for puns. For our last story, he recounts a haunting nightmare:

“When I was a kid, I used to have extremely vivid dreams. One repetitive dream I had was so real to me that, like the kids in Nightmare on Elm Street, I was afraid to go to bed for fear that something would come get me while I was sleeping (and this was B.F.—before Freddy). But unlike Freddy who is known for his gloved hand, this something was literally a hand. It was a ghoulish disembodied white hand that hid just off the edge of my bed, taunting me, daring me to look over the edge so it could seize me in its icy death grip. It scared me so much that during the day I would imagine it plotting, waiting for another chance to take me in my sleep.”