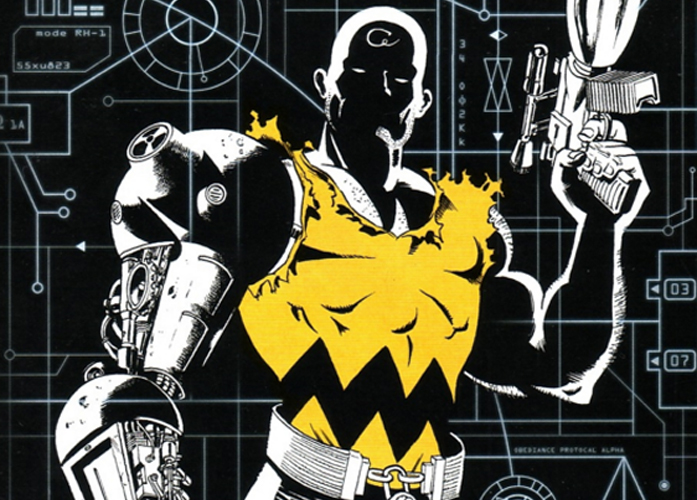 What do Peanuts, the apocalypse, and robots have in common?

Nothing. Literally nothing. So naturally, the mad art geniuses out there said, “you know what I should do?”, and combined these things into beautiful, post-apocalyptic Peanuts masterpieces.

Presenting Post-ApocaPeanuts: the trend you never knew you wanted.

Nothing will ever be better than the adorable, original Peanuts characters. But it is kinda cool to see them reimagined so differently. I mean, slap a yellow black-zig-zagged tee on a bald Mad Max and BAM, you’ve basically got this picture.

But there’s not just fanart of Peanuts in a apocalypse-torn wasteland – there’s a whole comic book of it.

Jason Yungbluth’s “Weapon Brown” (yess) was a crowd-funded spoof idea for a comic book (yessss) of a gritty Peanuts world where Charlie – I mean Chuck – is “a hard-bitten, hard hitting ex-super soldier scratching out a living amongst the ruins of a crapsack future.”

I’ve never heard the term “crapsack” to refer to the apocalypse, but let me tell ya, it’s all I’m gonna use from now on.

The animated trailer makes it look like Chuck was modeled after the lovechild of Bruce Willis and Jason Statham – right down the the do-I-sound-gritty-enough voice. All topped off with a rather epic robotic arm.

But it’s not just Peanuts – this comic has other, well, comic favorites, including a baddie with his robot tiger (wonder who that could be), Garfield, Popeye, and many more. But, y’know, with a dash of hardened-by-the-apocalypse-ness.

We all wonder what our favorite cartoon kids grew up to do, and more importantly what they grew up to look like. Hell, Rugrats made a whole show out of the idea with Rugrats: All Growed Up, and fans have been drawing the characters as teenaged hipsters ever since.

But my gut’s tellin’ me that “Surviving the Apocalypse” never made it on that list…and yet here we are. Because creative people rock.

To celebrate your love of all things Peanuts, check out our Peanuts Collection!