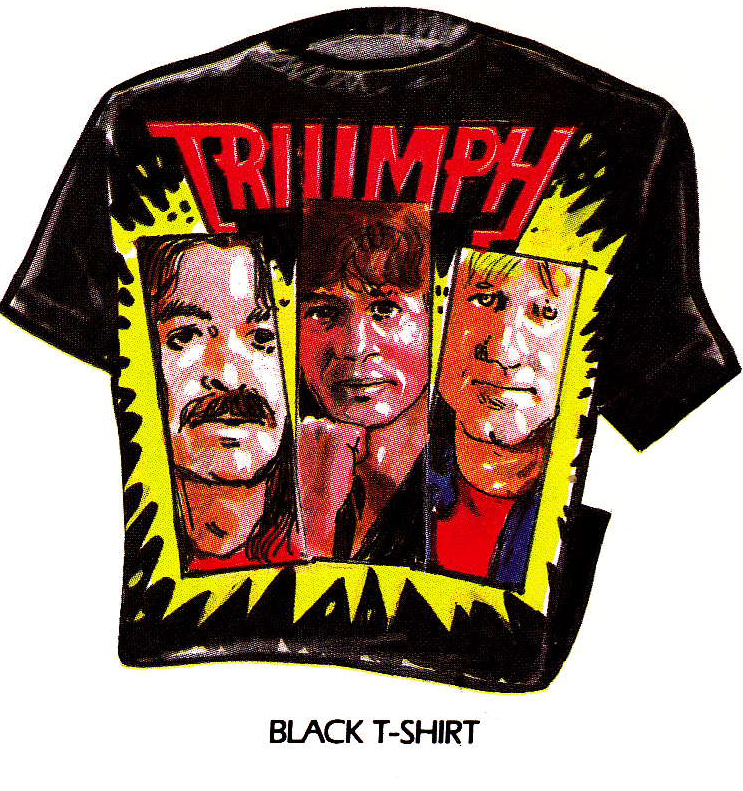 Today it’s easy to take internet T-shirts for granted. Not only can you buy one with a simple finger tap, but you’ll be wearing that shirt in a matter of days. A shirt you might well have designed yourself! Miraculous!

But back in the dark days of the 1970s, the only way to get an official rock T-shirt was to buy a record of your favorite band, look inside for a coupon offer, cut out the coupon with scissors, and send money off in an actual mail envelope! Hopefully, six to eight weeks later, you had a sweet tee that looked sorta like it did on the order form, fit somewhat decently, and was not made of burlap. 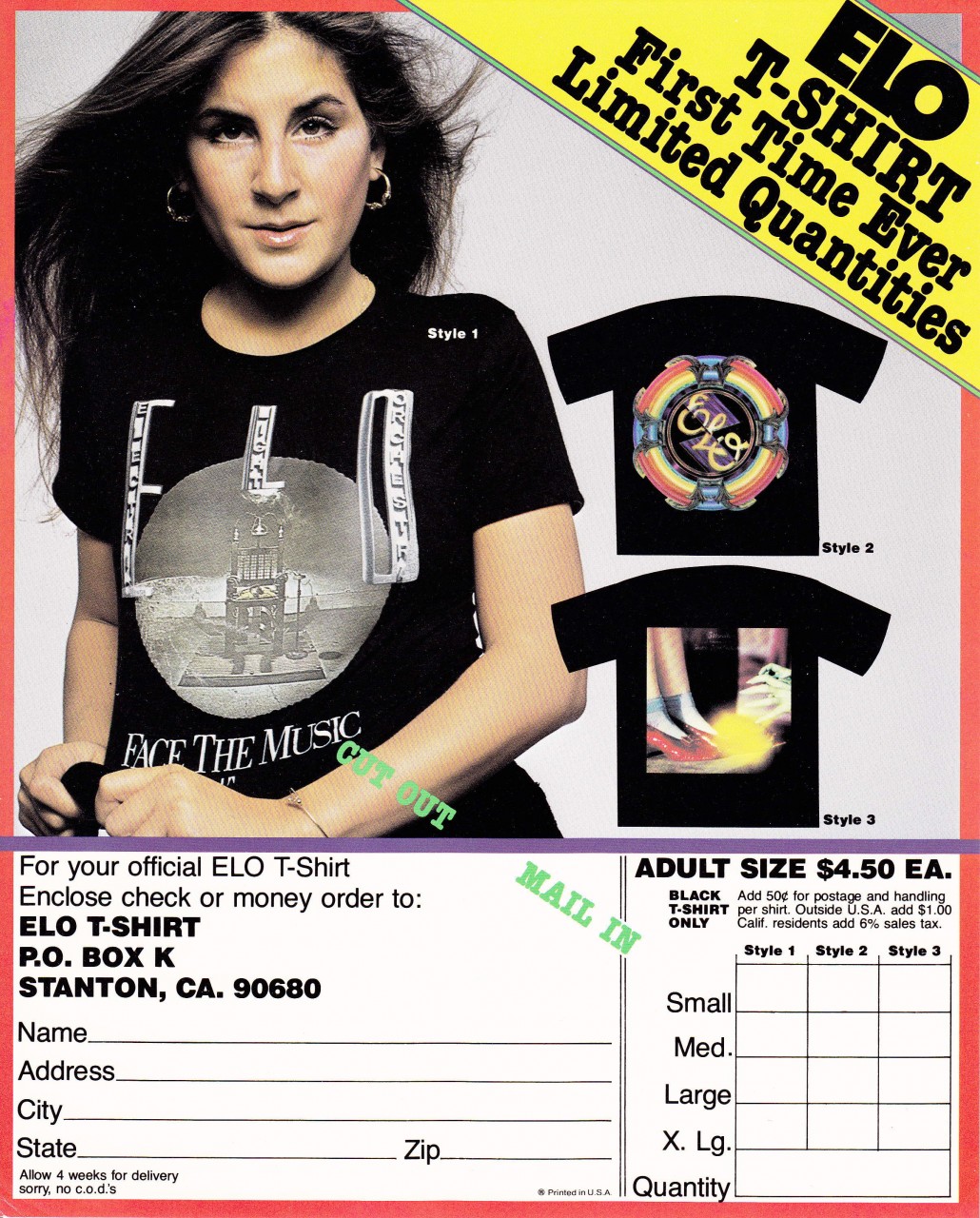 Yep, in the Seventies all you needed was five dollars to look like a rock ‘n’ roller. But you needed two other intangibles as well: trust and patience. Think about it. You had to send your hard-earned paper route money into a black hole and hope you’d get your T-shirt before you grew two sizes. After all, it wasn’t unheard-of for mail-order stuff to take a couple months to reach your little suburban mailbox.

Two months in a kid’s life is enough time to get way into a band, fall out of love with that band, and actively hate them by the time the merch arrives! Imagine ordering a Saturday Night Fever T-shirt and receiving it in the mail the day you’re exploding disco records in your parents’ backyard to coincide with National Disco Sucks Day!

So when did rock ‘n’ roll T-shirts come into vogue? Nobody knows for sure, but it’s my guess that rock became “strictly commercial” (as Frank Zappa would say) during the Nixon-Ford-Carter era. Face it: before that you were either square or cool. And cool people didn’t have time to buy T-shirts. They were too busy turning their mom’s drapes into dashikis and headbands!

Seriously, look at a picture of the fans at the original Woodstock. Not a single logo T-shirt in sight.

No, it wasn’t until the Seventies when you could look like a walking advertisement for your favorite band and people would actually admire you! But it wasn’t like you could waltz into Target and buy a Rolling Stones T-shirt like you can today. Nope. You’d have to go to a head shop, a record store, or go the mail order route. Only the hippest kids could pull off venturing into a head shop, and the record stores only stocked big fat guy sizes. So that pretty much left you with mail order. 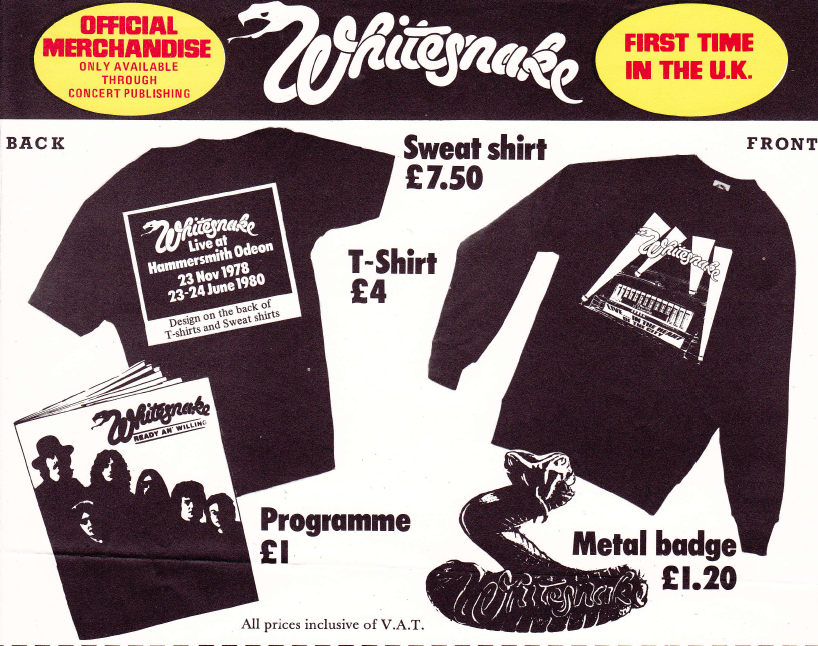 I buckled under and ordered an Aerosmith shirt in sixth grade, against my better judgement. By the time it showed up they had a new album out and I felt like I was out of step. But five bucks was five bucks, and I still loved Aerosmith. Besides, the shirt looked great—until my mom washed it. That thing came out of the dryer with logo and color still intact, but the arm holes looked preposterous. The left one was big enough to fit my grandma’s huge thigh, and the right arm hole strangled my puny bicep! Once my trust was violated like that, I gave up on rock mail-order shirts. Until this year.

A couple weeks ago, I was putting together a mix tape for a buddy of mine who still drives a Chevette with a tape deck (and is a little weak in the Alice Cooper department). I gathered up a handful of records—Love it to Death, Killer, School’s Out, Easy Action—to humbly assemble North America’s Finest Alice Cooper Tape, when a T-shirt offer fell out of the record jacket. 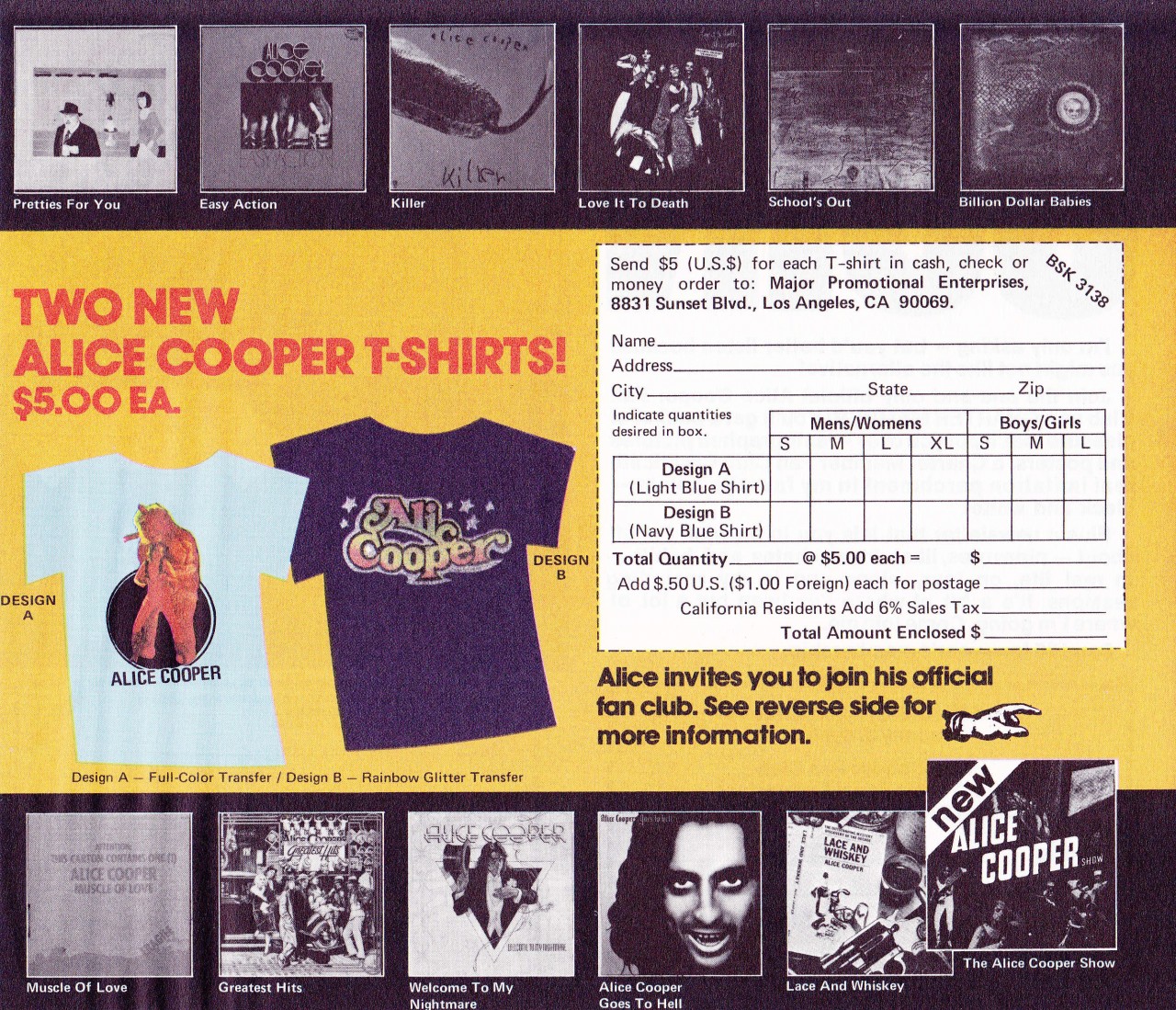 I wondered what would happen if I ordered an Alice Cooper shirt from a decades-old ad. Unlike some of the T-shirt offers I found in my collection, this one had no expiration date. Would they honor it? For $5.00? Would there still be anyone connected to The Alice Cooper Organization, Ltd. at that address? So many questions. So much time. Time enough to draw a boa constrictor and execute a light logo exploration on my envelope to Major Promotional Enterprises. Better than the toadies standing between me and Alice Cooper deserved! It was hard to stop there. I figured I’d order more shirts from old offers I discovered hidden in my record collection. If I received even one of the T-shirts in the mail I’d still be ahead of the game since they cost so little! Next order of business? Order an Aerosmith shirt from an offer in my copy of Draw The Line. One problem: this offer did have an expiration date. September 30, 1978. It was pretty clear they had no intention of honoring an offer like this placed in 1979, let alone 2015!

But who knows, right? Weirder things have happened. Best not to overthink it. Jump right in, I thought. I’d wow them with an honest, grass-roots—and defiantly lo-fi—rendition of their logo on the envelope to grab their attention. Old-school for sure, but it might at least get opened.

Then I hit them with my sob story about the ill-fitting Aerosmith Rocks shirt I ordered as a kid and see if they’d make good on a thirty-seven year old mistake. 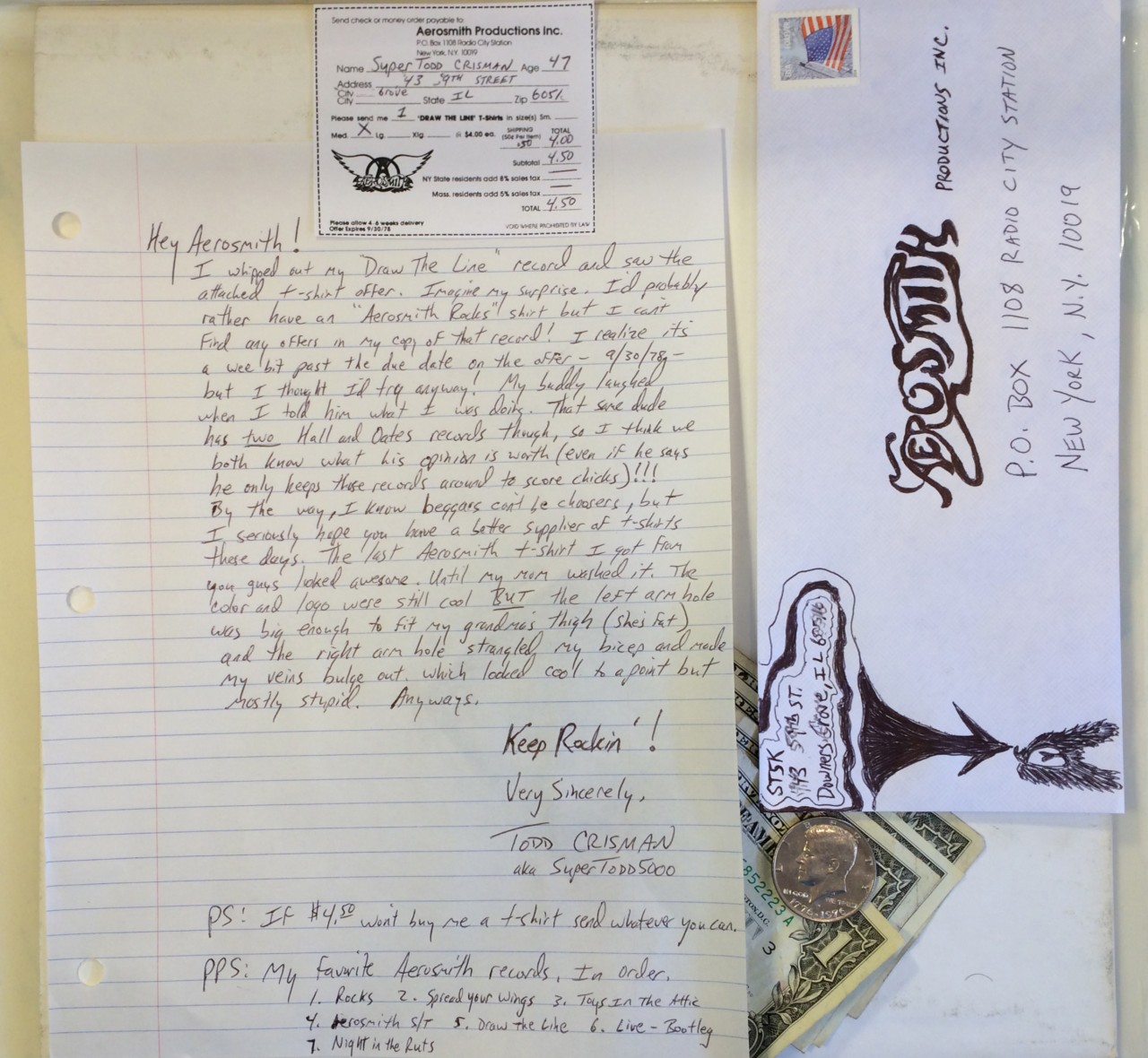 I dug out more and more offers from records I hadn’t played in a while. I had a feeling that hard rock and metal records would be more likely to contain t-shirt and fan club offers. I was right. For every ELO offer, there were seven or eight like these: 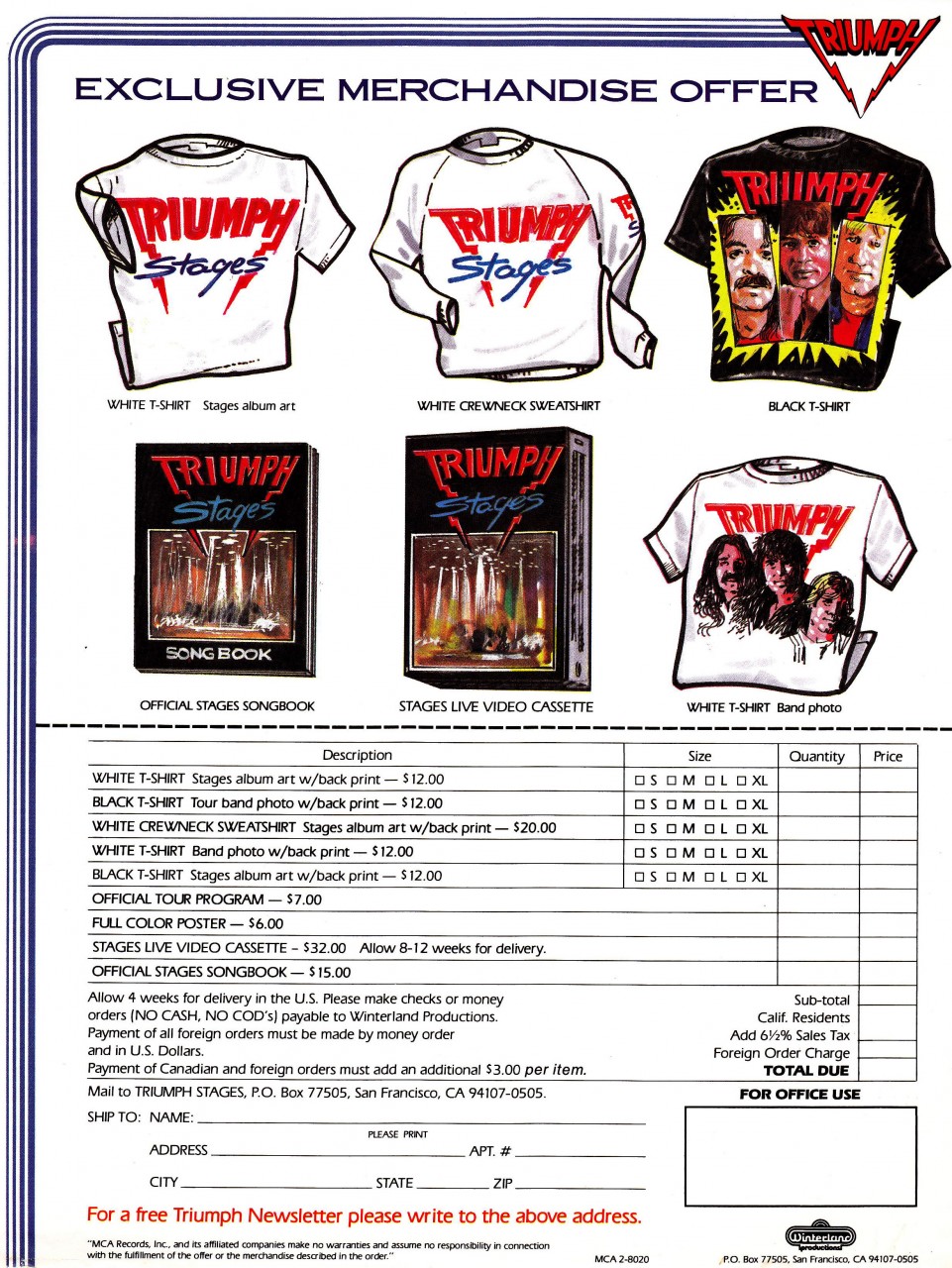 This Triumph offer really made me laugh. The “artistry” used to create their t-shirts made me feel like Renoir. Talk about bush league. And three months for a video cassette? It didn’t take that long to invent the video cassette. I’m not sure I’m gonna waste a stamp on that. I knew at least one of my Kiss albums would have an offer inside. Hotter Than Hell? Nope. Rock and Roll Over? Nope. Double Platinum? Indeed. And not just any offer. Seventy-eight was a big year for the Kiss Army, the best idea since bubblegum to separate kids from their money. As a youngster I’d never been a member, since I had so little pocket money. Plus, even in my pre-teen years I could smell something fishy. But you have to hand it to Gene Simmons—The Hard Rock P.T. Barnum—for taking merchandising to a new level. There are no fewer than fifteen ways you can demonstrate your love of all things Kiss! I’m going to take a chance on this six-dollar Platinum Edition Tee. The metallic logo ‘reflects light in a million changing color patterns’. I think I’m gonna draw Ace on the envelope just to drive Gene Simmons out of his mind! How does it end? Your guess is as good as mine. Will I receive any T-shirts? How many rejection letters? Will anyone have the guts to send me a rejection letter and keep my money? I’ll be the cock-of-the-walk if even one shirt arrives in the mail. One thing’s for sure. It’ll be six to eight weeks from today before we find out.

Todd Crisman is a freelance writer and rock journalist incapable of learning from his mistakes.