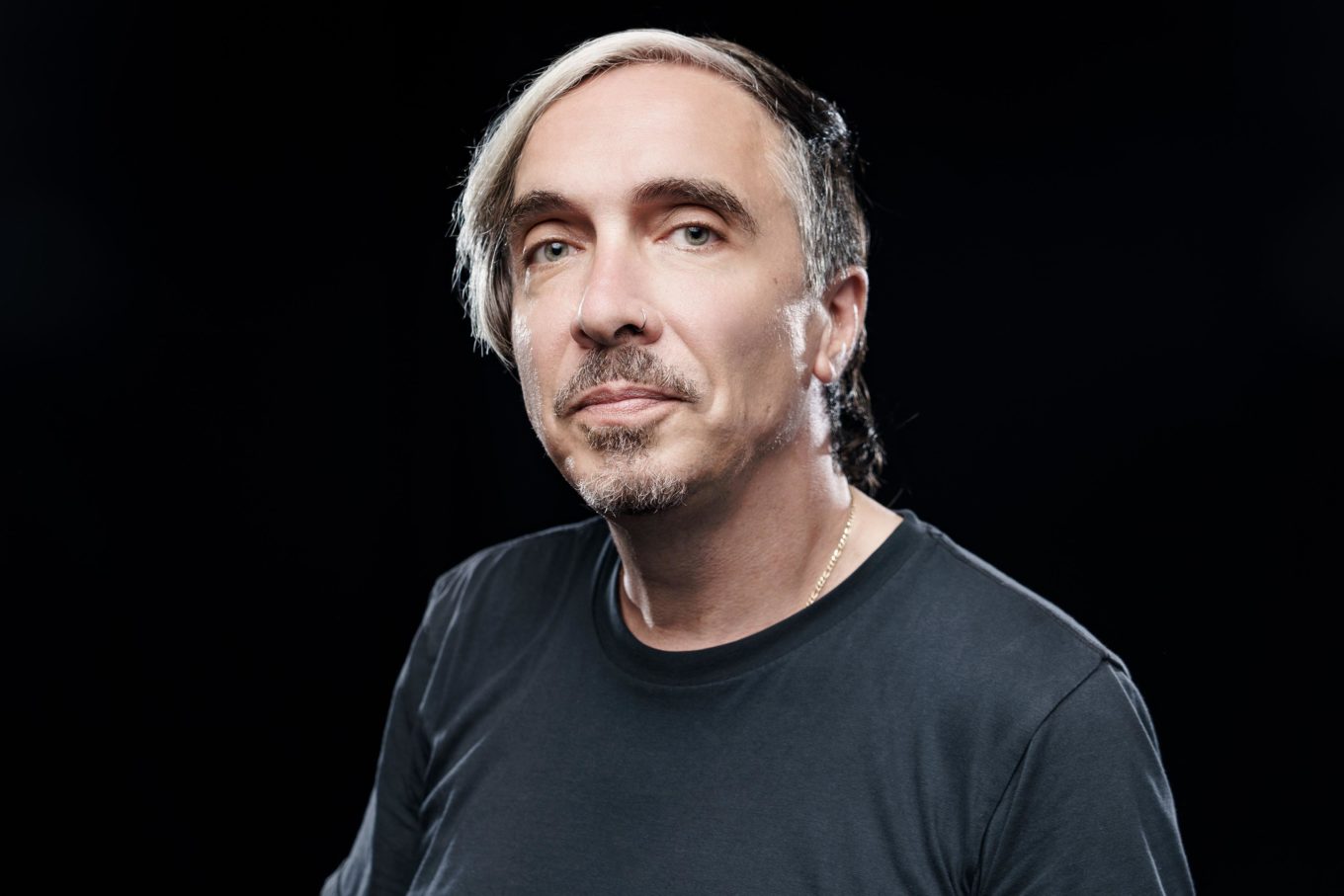 Edley ODowd may be known as the drummer of Psychic TV, but he was also the band’s graphic designer.

Psychic TV was originally a British experimental band that saw its rise through the 1980s, collaborated with William S. Burroughs and released over 100 albums.

ODowd is an artist, designer and percussionist who was the one who first persuaded Psychic TV’s band leader Genesis Breyer P-Orridge to rekindle h/er rock spirit and playing a Psychic TV show back in 2003. It sparked a new formation of the band, leading to a 15-year tour and several more albums, until P-Orridge’s passing this past March.

After mounting a solo exhibition and book called Discipline: The Art Of Psychic TV – 2003 – 2016, which showcased posters, neon lit sculptures and art installations based on the band, now ODowd runs the Threadless Artist Shop for Psychic TV, selling the band’s t-shirt designs, which date back to the 1980s. There’s also slip-on sneakers, merch bearing the psychic cross and graphics he designed himself, including Alienist, which was the last Psychic TV album, released in 2016.

ODowd, who was the Toilet Böys drummer, and works as a mental health counsellor today, spoke from his home in New York City about retro design, the evolution of the band t-shirt and grieving their best friend.

How did you convince Gen to restart Psychic TV in 2003?

Edley ODowd: Genesis and I became friends because s/he married my first girlfriend, Lady Jaye [Jaqueline Breyer]. We knew each other since we were 16, we met in 1984 at a Siouxsie and the Banshees concert. Years later when she married Genesis, we were introduced in a funny way. I got together with Lady Jaye, we got together and talked for a few hours. When I got home, Gen left me a voicemail looking for her, talking into the machine until the tape ran out. I called back, thinking ‘OMG,’ I was a big fan of Psychic TV as a kid, but we became fast friends based on that one phone call. I told Gen to reform Psychic TV for one concert. “Pick out a band, you sing, for old times’ sake,” I said. “Your words and music are relevant.” Gen tried to call my bluff and said: “If you find a venue, choose a setlist and put together a band, and all I have to do is walk out there and sing, you have a deal.” Gen didn’t think I would do it, and I did, so s/he had to perform. It was Dec 6, 2003. A huge snowstorm hit NYC, but there were 500 people lined up around the block. After that, the phone never stopped ringing.

How did you become the band’s graphic designer, too?

I was a seasoned graphic designer, then I became the in-house designer for Psychic TV. When digital printing started, bootlegging was out of control. You’d try to hunt these people down and they’d close up their shop and go attack another band. I thought, how can we out-bootleg the bootleggers? Enter Zacq Rosen from Threadless who was a fan and asked if we would be interested in doing something with them. I said, “Would I ever.” It’s a place where we have the band’s designs, old and new. Its been very successful. I don’t see bootlegs hardly anywhere anymore.

How did selling merch help the band on tour?

It supplemented our income, we performed 15 years together, we’ve seen different economies. How does it affect a tour when terrorism affected a city? In Paris, we went from playing to 2000 people down to 500, as people were afraid to go out. This pandemic is hurting a lot of people, but its also giving an opportunity to reinvent. Sadly, Genesis passed away in March. I don’t think Gen would have survived Covid-19. H/er lungs were so compromised h/er entire life, s/he had asthma. As s/he got older, it became harder to manage. Add cancer, that’s a recipe for disaster.

In 2017, I had my first exhibition and book based on the art related to Psychic TV and artwork related to the band at Lethal Amounts gallery in Los Angeles. The bedspreads and pillows will become available over the next six months. 9 cushions and comforters, also 9.

What is the oldest Psychic TV design on the shop?

The test card skull t-shirt from 1981. You can put that on anywhere and people will respond to it.

The newest one was the Alienist t-shirt. I also found some vintage t-shirt designs, too. There are others that Gen designed around the same time we started working together, I’m not sure what they mean, I left all the spiritual stuff to Gen and I said “you do that and I’ll design it.”

What has the psychick cross come to represent in pop culture?

It represents a musical group, it also represents an artist’s life and a way of life. Which is really to be kind, to collaborate and to love one another. I grew up with it, saw it spray painted on walls in cities. I was 17, a friend gave me a copy of the Psychic TV album Dreams Less Sweet, and said ‘this band is a cult, they do blood and semen enemas.’ The craziest stuff. There was no internet to fact check so you had to take it at face value. I told Gen later and s/he always teased me about it, my irrational fears of being in a cult.

The cross represented your cultural tribe?

It represents kindred spirits, our last five or seven years of touring together, Gen would talk to the crowd and encourage them. We’d do a breakdown in a song and Gen would say to the audience: “We’re living in shitty times, we have to focus on the good, I want to invite you all to turn to the person on your left and smile, now turn to the person on your other side and hug them.” I would get so teary watching this happen night after night. It’s so simple. You’re going to a safe place when you go to a Psychic TV concert, a community. Gen and I were like family.

What graphic designers have you looked up to in music?

I was always a big fan of music packaging design, so my heroes are Neville Brody, who did a lot of design for The Face, Vaughan Oliver from 4AD and of course Peter Saville from Factory. Particularly with 4AD, I used to just look at those covers repeatedly. The way Oliver used typography and abstract imagery was always inspirational to me, even before I understood how it was put together. Having been trained in graphic design in an age where computers were new and considered an additional tool rather than the only tool. When I entered the workforce, I only knew the basics of one program and 80% of the work was still done by hand.

How do you feel about the evolution of the band t-shirt? It went from fan to fashion accessory?

Regarding t-shirts today: I am confounded by how t-shirts are, like you say, more of a fashion statement than a code to live by. I lived by that code as a teen in the late 80s. Between haircuts and t-shirts, it’s how you found your community back then. I wonder if companies like H&M are actually licensing these designs from the bands themselves or if it’s just illegal appropriation. It seemed to all start with the CBGB t-shirt and then, The Ramones. Everyone wearing something they themselves are not familiar with. Yesterday I went to the beach recently and saw, for the thousandth time, a teenager wearing a Joy Division “Unknown Pleasures” t-shirt. It boggles the mind for those of us who had the original t-shirt and wore it until it disintegrated off us because we loved the music so much.

What do you miss most about Gen, and being on tour together?

The laughing and the performing. Performing was transformative. A good part of what we did was transformational. That’s why I set up my drums on the side. We had our sight lines in place, we would just tear it up. We would crack up onstage. It was a constant comment. After the gigs people would say, you all look so happy. The inside jokes on tour, the down time being silly with each other. Its sad to see that family go. I knew Gen for 20 years, I’m culling through hard drives, I’m sure I’ll uncover some gems. But I’m taking it slow. Gen was my best friend, so it’s hard – I have to take care of my heart. I still go to text h/er.

It will live on in many different ways?

That’s my intention, and that’s what Gen wanted me to do. Gen told me years ago, and I asked what do you want me to do when you’re not here anymore? I didn’t expect that to happen for a long time. If s/he didn’t have leukemia, I imagine s/he’d still be here. S/he said, “you’re going to be giving lectures on me.” When I started talking about the exhibition in 2016, s/he supported it, gave a talk at the gallery, the band did two west coast shows in support of it. S/he said, “go for it.”

Did Gen ever thank you for getting the band together?

A million times. S/he thanked me in public, s/he’d say it onstage: “And on the drums, the man who made it all happen.”