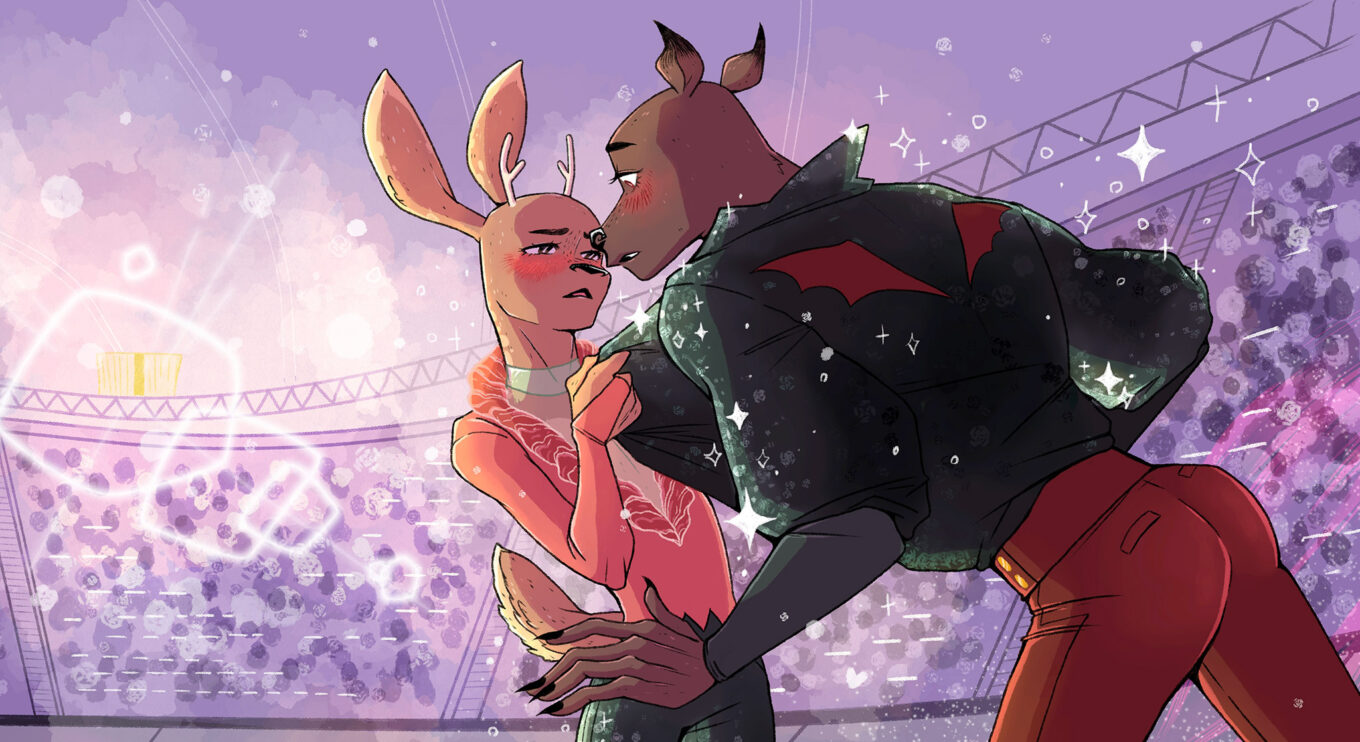 Combine the awe-inspiring grace of figure skating with the dramatic takedowns of judo, and you get a sport so epic that it could only exist in the webtoon Blades of Furry. Battle skating is obviously dangerous, but have you ever felt the uncertainty of having a crush and not knowing if the feelings are mutual? Or the vulnerability of your rival knowing a secret about you that could unravel everything? Or the mounting pressure of exceedingly high expectations? Therein lies the real danger. And did we mention the blood-thirsty vampires?

Blades of Furry, created by author-wives duo Deya Muniz and Emily Erdos, tells a romantic story that’s as fun and daring as a skater attempting a triple axel. Its edge-of-your-seat plot and dynamic characters, who are largely LGBTQIA+, make it tough not to binge the entire series in one go. This webtoon is special to Deya and Emily not just because it gives them an opportunity to work together, but also because it’s a story they would’ve loved to read when they were teenagers trying to figure out themselves.

We recently connected with them to ask about the origins of Blades of Furry, their new Threadless Artist Shop, and their upcoming projects.

Note from Editor: Deya and Emily answered a majority of these questions jointly, which is indicated by “D&E.”

What do you enjoy most about collaborating with your significant other? Does working on a project with your partner have any unique advantages?

D&E: Well, we know each other REALLY well so that helps a lot with work! We definitely don’t have to explain ourselves as much working with each other as we do with other people! Oftentimes we do a really cool back and forth where we both bring in new interesting aspects to the art and story that the other wouldn’t have thought of. We appreciate that a lot!

You describe Blades of Furry as a furry, gay, vampire, figure-skating-battle romance. Tell us how this story came together with all of these different elements.

Deya: I was working on my master’s thesis about suspension of disbelief, and part of that was a visual story component (so a comic, animatic, etc… something along those lines). In the name of proving you can get away with the craziest concepts as long as you tick certain boxes I described in my thesis, I came up with this story concept! I think it worked out!! The furry part was entirely Emily’s influence on me, of course. And so was Emile’s name and general vibe, haha!

You have a Patreon that helps support the creation of future Blades of Furry episodes. In what ways does this type of crowdfunding help you build a community around your content? What influence do your subscribers have on the webtoon?

D&E: Well, to be honest, the crowdfunding is more to give us a financial safety net than anything else. Being a comic creator comes with a lot of financial uncertainty, and being able to receive support directly from fans eases that a little bit.

We like to interact with all our readers and like to pay some extra attention to the patrons. They’re a really sweet bunch and it’s really touching to see how much love they have for something we created. That being said, we don’t give anyone else any control over what happens in our story. The patrons do get some input in what they get as part of their monthly rewards though!

The story of Emile and Radu portrays love and identity in ways that aren’t typically seen in mainstream entertainment. Why is this important for readers in the LGBTQIA+ community?

We also like to play around with romance and BL tropes to portray relationship and friendship dynamics that feel more natural and realistic (at least to us) than the ones that are most repeated in media.

The battle skating tournament in Blades of Furry draws a lot from real-life figure skating. Emily, how much of the webtoon is inspired by your experiences as a figure skater?

Emily: We both only ever started skating after Blades of Furry got published! Deya has had a slight interest in figure skating for a long time, and it intensified after we watched Yuri on Ice together at the beginning of our relationship. Once she learned more about Yuzuru Hanyu, it became more of an obsession.

Part of the reason we made up a whole new sport for BoF is because we didn’t know that much about the intricacies of figure skating and didn’t have easy access to the ins and outs of competitions. Now that we know more skaters and have been skating for a while, we know quite a bit more, but it still doesn’t feel enough to tell a story like this about a real sport and get everything right. Making things up has its advantages! That being said, it has been really fun to incorporate new things we are learning through our own skating into the story.

Battle skating combines aspects of figure skating and judo. Which athletes—or even fictional characters—do you think would be great at this sport if it were real?

D&E: Well, anyone real would end up heavily injured at best. But Yuri Plisetsky from Yuri on Ice would probably do great at battle skating, haha!

What’s your favorite piece of merch from your Threadless Artist Shop? (Mine is the “0% Juice” shirt featuring Radu’s favorite spicy beverage, if that counts for anything!)

Deya: I love the “0% juice shirt as well!! I also really like the baseball cap and the beanie, though! And the phone cases!! Emily’s is definitely the Blades of Furry hoodies! They’re super comfy!!

Which Blades of Furry character has the best sense of style?

Emily’s Instagram Highlights show multiple galleries of Blades of Furry fan art. How does it feel to have created something that inspires so many fellow artists and fans?

D&E: That’s one of the best feelings ever, honestly. It’s one of the things that makes us feel the most accomplished! Having characters people love enough to spend their time making art of is something really special to us.

Deya, your upcoming graphic novel, The Princess and the Grilled Cheese Sandwich, scheduled to release on May 9, 2023, is a classic story of true love, mistaken identity, and lots of grilled cheese sandwiches. Tell us about the best grilled cheese you’ve ever had.

Deya: Probably the first few Emily made me. She introduced me to the concept of buttering the outside of the bread and I haven’t been the same since.

Do you have any other upcoming projects we should keep an eye out for? Where’s the best place for fans to check for new stuff?

D&E: Well, there’s Deya’s book you already mentioned, but that’s the only one with a set release date! Emily is also working on a book of her own. Stay tuned to our social media for that!

Special thanks to Deya and Emily for giving us a glimpse into the world of Blades of Furry! Buy official merch from their Threadless Artist Shop and visit Deya and Emily’s Linktree pages to find them on social media.