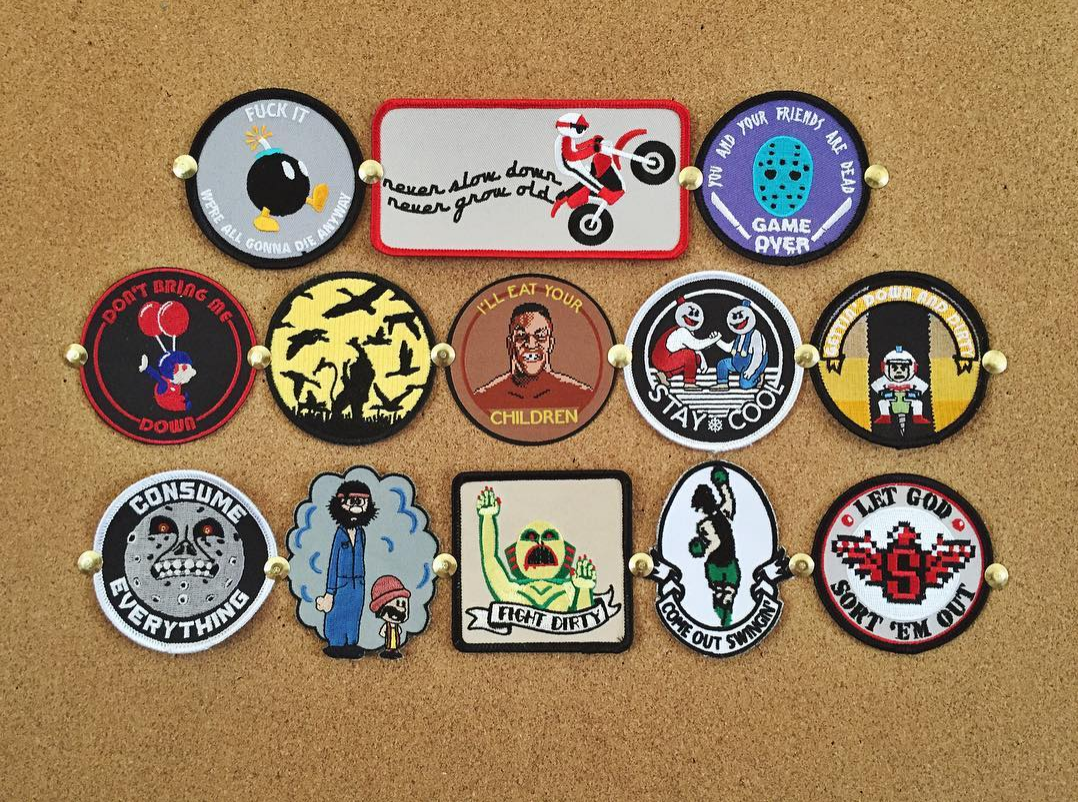 If you haven’t already picked up on it, pins and patches are, like, so hot right now. But patch or not, great designs are great designs – so why not put them on shirts as well?

That’s what Dano “Danobanano” Brown did with his rad patch art. His Artist Shop bleeds the same ’80s/’90s nerdy nostalgia that made his patches so popular. And pro tip – getting a shirt with one of his designs already on it just saves you the trouble of ironing a patch on your apparel.

We talked to Dano about his massive NES Cartridge collection, the current pin and patch obsession, and, of course, about his transition from selling patches to selling patches and apparel. Check out what he had to say below!

So people definitely know you from your amazing patches – what made you want to start printing tees as well? Your designs look great on apparel!

Thanks! When I started making patches, I intended for them to be more like collectibles for my Nintendo collecting friends to buy and trade rather than actual wearable accessories. Once the first few small runs sold out and my friends shared them on social media, I started getting requests to make more from people I didn’t know that actually just wanted to wear them.

After I started doing bigger runs and selling to more and more new people, I started getting requests to make shirts by people who enjoyed the designs but weren’t interested in collecting or wearing patches. It seemed like something worth trying.

What made you want to open a Threadless Artist Shop?

My buddy on Instagram who has purchased a few patches from me told me about Threadless Artist Shops. I had been a fan of Threadless for quite some time but had no idea that there was a way for me to set up shop there until he told me. I got set up the following weekend.

That’s awesome! We’re happy to have you! When did you get started in the patch game?

I did my first run of patches a little over a year ago. It was only 12 patches and I sold them for exactly what I paid to have them made. It was meant to be more of a test run to see if I could do this without losing money. I was lucky enough to sell all 12 within the first day, so I just kept going and growing from there.

Your designs are definitely super ‘80s/’90s nostalgia based! What draws you to that time period?

The late ’80s/early ’90s were some of the best years of my life. Every time I see an old toy or video game I had as a kid, it takes me back. Somehow over the years, the pursuit of that feeling has resulted in me owning a massive amount of old junk. Artwork and design can give me the same feeling. A lot of my designs are just new and improved versions of the things I was doodling in class back when I was a kid. I guess I just never really grew out of some of that stuff.

Speaking of collecting old stuff, I saw pictures of your cartridge collection and thought you were in a store – that’s an amazing collection! How many games do you have?

I only keep track of my NES cart count. I’m at 757 currently. I’m in the final stretch of completing the collection, but some of the ones I have left to find are insanely rare, so it’s kind of like, “so close yet so far away.”

How long has it taken you to acquire your amazing collection of gamer nostalgia?

In 2005 I started trying to track down the 5-10 games I owned as a kid. I spent a lot of time at thrift stores and swap meets anyway, so it just seemed like a fun thing to look out for. While I was looking out for those ones, I found other ones that seemed like they might be fun so I grabbed them. Back then the prices were nothing like what they are now, so it wasn’t really setting me back much. One day I counted them and realized I had almost 100. I decided I might as well keep going. Now I have about 11 years of old Nintendo stuff filling up my game room. It’s pretty out of control.

This just seems like a mean question…but what’s your favorite N-64 game?

Goldeneye! I’ve wasted so many hours of my life playing that one.

If you could go back and take three things from your childhood back home to 2016, what would they be?

Oh man. My mom gave away all of my He-Man toys when I was a kid. That one still hurts. I also had the sweetest GI Joe headquarters that mysteriously vanished. I’d love to have that thing displayed in the game room.

Honestly though, what I really wish I still had the most is all of my old drawings, paintings, and stories. I was so hard on myself as a kid and thought everything I did sucked. It always ended up in the trash. I would love to look back on it all now. I’m pretty sure it would mostly just be drawings of Ninja Turtles but I’d still love to see them.

Usually I sketch out an idea on a scrap of paper. 99% of the time, my ideas never make it past that. If they do though, I draw a second version without all of the scribbles and mistakes. After that I scan the new and improved drawing into my computer where it gets inked and colored.

Did you go to school for art or are you self-taught?

Aside from a Photoshop class in college and the typical high school art classes, I’m self-taught.

Is doing art your day job as well?

Unfortunately, no. I have a regular 9 to 5 on weekdays. Art has always been a huge part of my life, but it wasn’t until the last few years that I realized it may actually be possible to survive off of my art. Social media has been a huge help for me that I never saw coming.

There’s such a pin/patch craze right now! Why do you think that is?

I think that theres something really appealing about being able to customize your hat, jacket, purse, etc. with pins and patches that are made by small, independent artists. Buying and wearing them is a really affordable way to stand out and be unique while supporting artists directly.

Is making patches and pins a good way to promote yourself as an artist?

For me it has been. I enjoy the collecting side of the patch game, so I make a lot of trades with other artists for their work just to add to my own collection. Most of the time when an artist receives one of my patches, they share it. In turn, some of their fans become my fans as well. I always do the same for them. It really is like a community in a lot of ways. A lot of the guys and girls making these patches and pins are happy to help each other out and spread the love.

I can’t talk about love without mentioning the actual @Patchgame account though. The guy who runs that account is amazing and does so much to get people’s work seen. He’s been a huge help and has actually become a great friend as well.

That’s awesome! Which of your designs has been most popular? What’s YOUR favorite design?

My most popular design is probably the Friday the 13th one. It’s popular with the retro game collecting community, which was my goal, but what I didn’t know was that there is such a huge horror community. I accidentally tapped into something much bigger with that design. Every time I do a run of patches for that design, it sells out pretty quickly.

My favorite one though is one of my least successful. It’s a Balloon Fight-inspired design that reads, “Don’t Bring Me Down.” I just really love that game and I was really happy with the way the design came together. I did a run of patches for that one that did sell out, but it took quite a while and there really hasn’t been much demand for a second run. I’m still really proud of that one though.

Just a big thank you to everyone who supports art and independent artists!