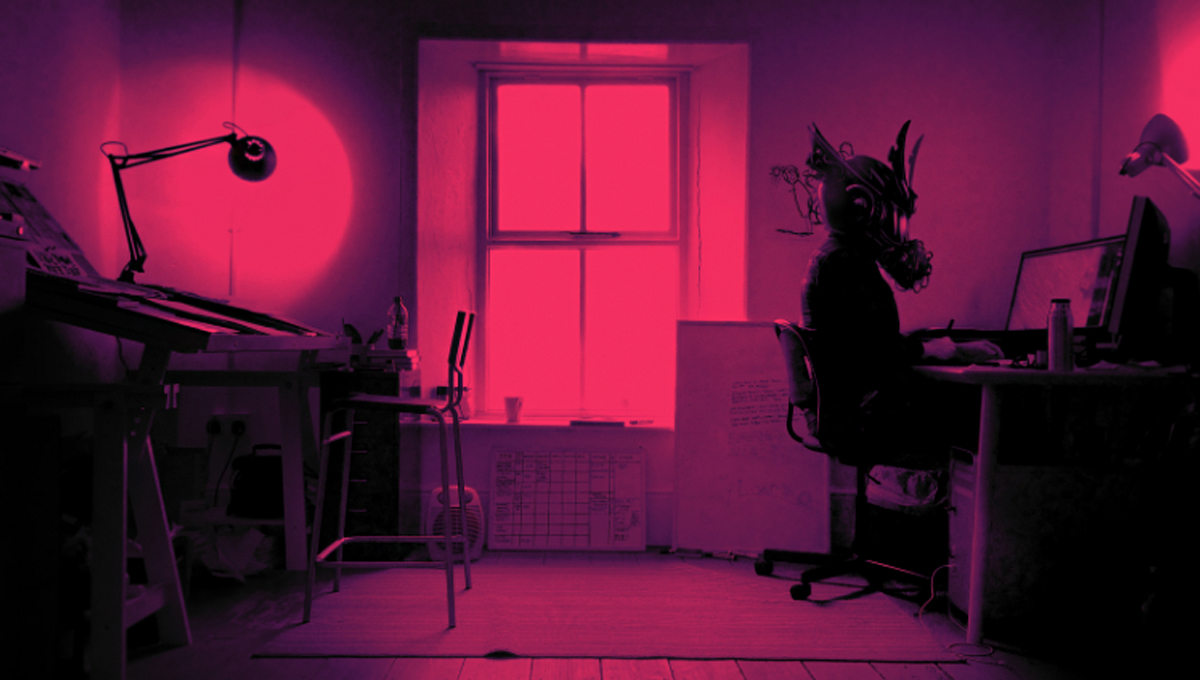 We’ve all heard the saying “if you can dream it, you can do it.” But when it comes to making your dreams into reality, artist Matt Griffin has seriously succeeded. After years of working in media, this Ireland-based artist decided to pursue his dreams of being an illustrator and writer. His freelance plunge has since led him to work with Warner Bros. creating art for IT merchandise packaging, and he just finished a trilogy of books, the first of which (A Cage of Roots) won the Literacy Association of Ireland Children’s Book of the Year in the 9-11 age category this year.

It’s safe to say that Matt is a serious inspiration to get out there and make things happen for yourself. We talked to him about his writing, characters, Artist Shop, and about some of his biggest influences: sci-fi (!) and Irish folklore (!!). Get to know him!

First things first, tell us a little bit about yourself! What’s the art scene like in Ireland!

Well, my name is Matt and I’m an illustrator from Ireland. I’m also an author, with my third book coming out in March 2017. I’m married with two daughters, and I am obsessed with art, film, books, sci-fi, and inclement weather. The art scene here is really vibrant, and going from strength to strength. Ireland has always been a nation with a fondness for the arts from music to film to theatre. These days there is a world-famous animation industry here, not to mention my own industry of commercial illustration. We have a huge amount of illustrative talent here whose work is known all over the world and thankfully, because the island is small, we all know each other! We have an organisation called ‘Illustrators Ireland’, which keeps us in touch and I’ve made some great friends out of it.

When did you first know that art/writing is what you wanted to do for a living?

I think I’ve always known! I always knew I wanted to draw, write, and make music. Throughout the course of my life, one or the other has been dominant. Eventually, music fell by the wayside (but I’m picking it up again), writing was kind of a pipe dream that I came back to later, and my love of illustration won out overall. In my ’20s, I lived in London with a totally different career. It was cool – I worked in the media (sports, then music), I lived on a boat and I was (relatively) happy. I say relatively because while it was cool, it was not what I wanted to do with my life – I wanted to draw for a living. So in 2008 I took the plunge, moved home, and started a freelance career. It was hairy at the start…

You’ve had some major clients! What’s the most exciting client work you’ve gotten so far? The most fun?

Yes, I’ve been very lucky, particularly in the last couple of years. Pretty much all of my work these days is on projects I love – book covers, DVD/Blu-Ray covers, posters…This year I worked with Warner Bros. twice, most recently on merch packaging for the movie IT and before that on title design for a major film out next year (can’t disclose due to NDA). I have no idea if my work will be used (they hire a few designers to pitch concepts and they haven’t chosen yet), but it was very exciting and fun to work on. I was able to storyboard a kind of teaser trailer to show how my title would be revealed and was assured that anything possible could be made, so I could let my imagination off the hook. Was a lot of fun… Fingers crossed ;)

You recently did your first animation for a music video for Ships! Did you know how to animate beforehand or did you have to teach yourself? Is ’70s/’80s sci-fi a common inspiration for your work?

Yeah! That was really great to work on. The band is amazing, the song is incredible, and they put a lot of faith in me and let me pretty much do what I wanted. I had no idea how to animate, so yes I had to teach myself After Effects. Thankfully, once you know Photoshop it’s pretty intuitive – it’s more or less Photoshop with a timeline. The animation is not of the highest quality I admit, but thankfully that lends itself to the ’70s/’80s sci-fi cartoon aesthetic I was shooting for. And yes, ’70s/’80s sci-fi is a huge inspiration to me – possibly my biggest. Whether it’s films, animations, or book covers, I absolutely love that stuff.

I see “Irish Myths” on your list of “things that make you happy”! Which Irish myths have made the biggest impact on you and have influenced you the most?

I’m a big fan. We are lucky here in Ireland in that we have almost a bottomless well of stories to draw from. Our past is visible all around us – we have megalithic tombs older than the pyramids and pretty much every field has a ruined castle in it! And our mythology is taught in schools (at least it was when I was there) so it’s accessible from a young age, so I’ve always loved it. My favourite is The Tain, which is our equivalent of Homer’s Odyssey and possibly the most well known, as it involves our most famous hero – Cu Chulainn (pronounced Koo Kullan) who defends Ulster single-handedly against the rest of the country. It was only written down in the medieval Book Of Leinster – before that, it was passed on orally for hundreds of years. Very cool. :)

Tell us about your writing! Where did the inspiration behind the Ayla Trilogy come from?

As mentioned I always loved writing, but writing a book was a pipe dream. It was something I would love to do but never really thought would happen. But then an Irish publisher (The O’Brien Press, who I was working for as a graphic novel colourist) asked me to pitch a story. I still don’t know how they had any idea I liked to write! They also knew I was into Irish mythology and had quite a dark imagination, so they suggested something along those lines. I had notebooks full of little ideas, and in one I had a very rough sketch of an evil king made entirely of roots. I went for a walk (I always walk when I need to think), and came up with the whole story for him (or, more importantly, a girl who is taken prisoner by him), and pitched it. They asked me to write a couple of chapters to make sure I could do it and, after some tweaking under their guidance, they agreed to publish it on the strength of those. It became my debut children’s novel, A Cage of Roots, which came out in 2015. They asked me if I had a sequel (I had finished it on a cliffhanger) and I told them I had two, so it became a trilogy. Storm Weaver hit the shops in 2016 and the finale The Spiral Path was published earlier this year. A couple of months ago, A Cage of Roots won the Literacy Association of Ireland Children’s Book of the Year 2017 in the 9-11 age category, which was really amazing. That’s the official age category, but I’ve had lots of adults read them too ;)

What are some of the challenges of writing a trilogy? How do you plan out such an expansive story?

Well, first you need a rough idea of where you want to go. It’s like a drawing – you start rough and slowly build it up, adding detail, plot etc. As mentioned, I walk, and the details present themselves. It’s kind of like putting on a VR headset – I can watch it happening in front of me. Then I scribble down notes when I get home and take it from there. It had to be epic – on the surface, it’s a dark, Irish myth-inspired story but really what I try to explore in it is friendship, and what happens to those bonds when they are tested not just by in-fighting, but by ancient, dark magic trying its best to kill them! So I knew I wanted their adventure to be expansive. The first book sets the tone, drawing a group of friends into our ancient, magical past. Book two goes further down the rabbit hole. And book three brings the magic back home. The third is also the most philosophical – not sure if that comes across – but in that story, I try to question the nature of what constitutes magic. Maybe what we consider mundane, normal life is magic. The fact that we are here is pretty magical to me…

Tell me a little bit about your Artist Shop! Are there stories behind any of the characters in your Shop?

Sure! I’m still finding my feet with the designs, but I love it as there is no brief, no client to please (apart from the potential customer, of course!) and so I can do anything I like. And yes, there are stories to all my characters – the one that is most predominant in my Artist Shop is called “The Endling“, and she is from a graphic novel I am writing (when I get a chance). It’s part of a much bigger project – a graphic novel that ties into a novel, and each can expand into a series and can be read independently or together.

I also do quite a bit of sci-fi, Rothko-inspired digital art (called “Other Seas/Other Suns“) which I think looks good on a tee. And there are other things too, little characters from The Endling or other stories. And believe or not – all of them are part of the same ‘universe’…In my head, anyway ;) I have lots more ideas for my Shop in the pipeline, so hopefully it will keep getting better!

Do you have a favorite design in your Shop?

I think maybe “Other Seas / Other Suns (BW) I” or “The Endling II”. But my favourite design is always the next one, as I always think I can do better. That applies to all of my work!

What artists are you most inspired by? What stories and authors?

As for stories, my desert island book is The Lord of the Rings, and The Hobbit is what made me want to write and illustrate books. I also love Neil Gaiman (The Ocean at the End of the Lane is a work of genius) and David Mitchell. Iain M Banks and Clive Barker were favourites when I was younger. I’m currently reading The Three Body Problem by Liu Cixin which is awesome. I think we can spot a sci-fi trend here, can’t we? I like other stuff too…just not as much ;)

Work hard, keep learning, and make work that inspires you and don’t worry about the rest – it will fall into place.