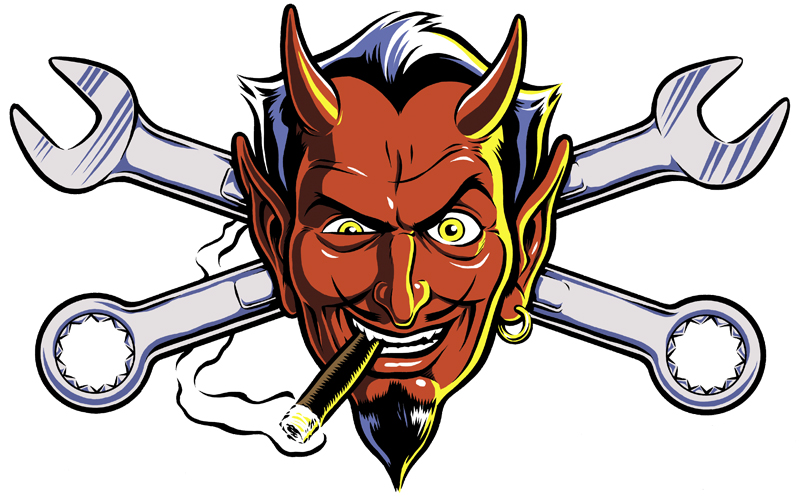 Hot bods and hot rods go together like a less pinky-out version of wine and cheese.

We talked to Coop about everything from lady-bods to hot-rod-bods, to fetish photography, to how he feels about his “low-brow” title.

Where do you draw inspiration from? (no pun intended)

Hot rods, old men’s magazines, comic books, Rock & roll, collecting records, toys, and whatever else I’m interested in at the moment. Living in Los Angeles is very inspiring – it’s a great place to be right now, with a lot of amazing artists doing great work. LA is the best place to be in the world right now if you’re an artist.

You’re kind of synonymous with the ‘90s band poster scene – how has that scene changed today, for you and in general?

I’m not really a part of it these days, other than occasionally doing a poster for a friend’s band here and there. There are a lot more people doing it now than back in the 90’s, and a much more diverse range of styles and technique. It’s probably much more difficult to make an impression now, too. I was lucky back then. There were only a handful of us.

I’ve heard you’re one of the most ripped off artists out there! What are your thoughts about that? Especially nowadays in our remix culture?

Everything seems to be up for grabs in the internet age, and my large body of work is a victim of that. I’ve been producing work for 30 years – younger artists just think it’s part of the public domain by now. I see really talented people who don’t spend enough time creating original work because it’s much easier to interpret some popular bit of pop culture and get some quick recognition that way. At a certain point, the law of diminishing returns has to kick in (he said hopefully.) I wish art schools were teaching artists about things like copyright and attribution, too.

How has the age of the internet affected your career as a freelance artist?

It’s been great, honestly. It’s so much easier to connect with fans and collectors directly, without needing the middlemen like galleries or distributors, as well as promote your own work. Also companies like Threadless are real game-changers.

What about your art do you think resonates with people? 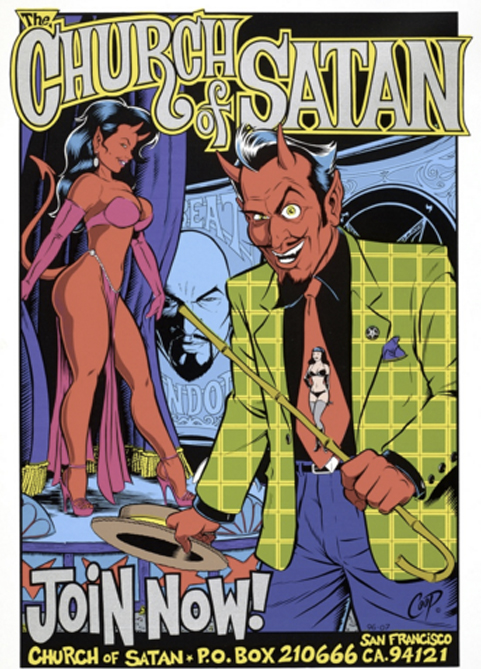 The sense of humor? The boobs? To be honest, I’ve always tried to create stuff that I like, and my success is in those areas where my tastes and the public’s taste intersect. I’m a frustrated musician, and a big record collector – maybe my work is the visual equivalent of a great loud rock & roll record. If I had a better idea, I might be more successful at it!

How has the art scene (or your area of art specifically) changed since you started?

Seems like there’s a LOT more people doing it now, and that makes it more important than ever to hustle. Like I said, I’ve been in the game 30 years, but I get zero time to rest on my laurels – there’s always five more people coming up behind me who want that same dollar.

When did you start your pinup/fetish photography?

I started in 2007 after I was in a car wreck. I was on crutches for several months and couldn’t stand up to paint, so I started shooting photos to keep doing something creative. My father taught me photography when I was a kid, so I fell back into it easily. It’s been a good influence on my other art – the two disciplines feed into one another very well. I have a lot of friends who are photographers and/or models, so it’s been easy to find people to shoot.

How has counterculture changed since when you started – especially in the music/fetish/pinup scenes?

It’s much more mainstream these days. I’ve been involved in all these scenes since the late 80’s, and I’ve seen it go from being very underground, to being used to sell cornflakes. Soccer moms with tattooed knuckles. It’s kinda wild. I don’t have a problem with that, I’m happy that people seem to be more accepting of weirdos like my friends.

How has the reaction to your art changed now that we’re in the midst of this “ultra-PC” culture?

I haven’t noticed any difference, but then, people have been complaining about political correctness since I started. I certainly haven’t changed what I’m doing at all.

Nice! What are your thoughts on the term “low-brow” art, especially in reference to your own?

I was never a fan of the term, but it seems to have been the one that stuck, so I guess I better get used to it.

Can you tell me a little bit about the connection between “low-brow” and Kustom Kulture?

It all comes from Robert Williams. He’s the zero point of a lot of stuff, including JUXTAPOZ magazine. Bob is a lifelong hot rodder, worked for Ed “Big Daddy” Roth, friends with Von Dutch, (the artist, not the clothing imprint) so the connection between hotrods/custom cars and Lowbrow Art is baked right in. Most of the 1st and 2nd wave of lowbrow artists were/are car guys too, myself included. I have a 1929 Model A, and a ’46 Ford, and I’m working on building another car right now. The amount of work and understanding of aesthetics that goes into building a custom car is every bit as subtle and arcane as what goes into creating a painting or any other kind of visual art. Guys who build hot rods are my artistic inspiration.