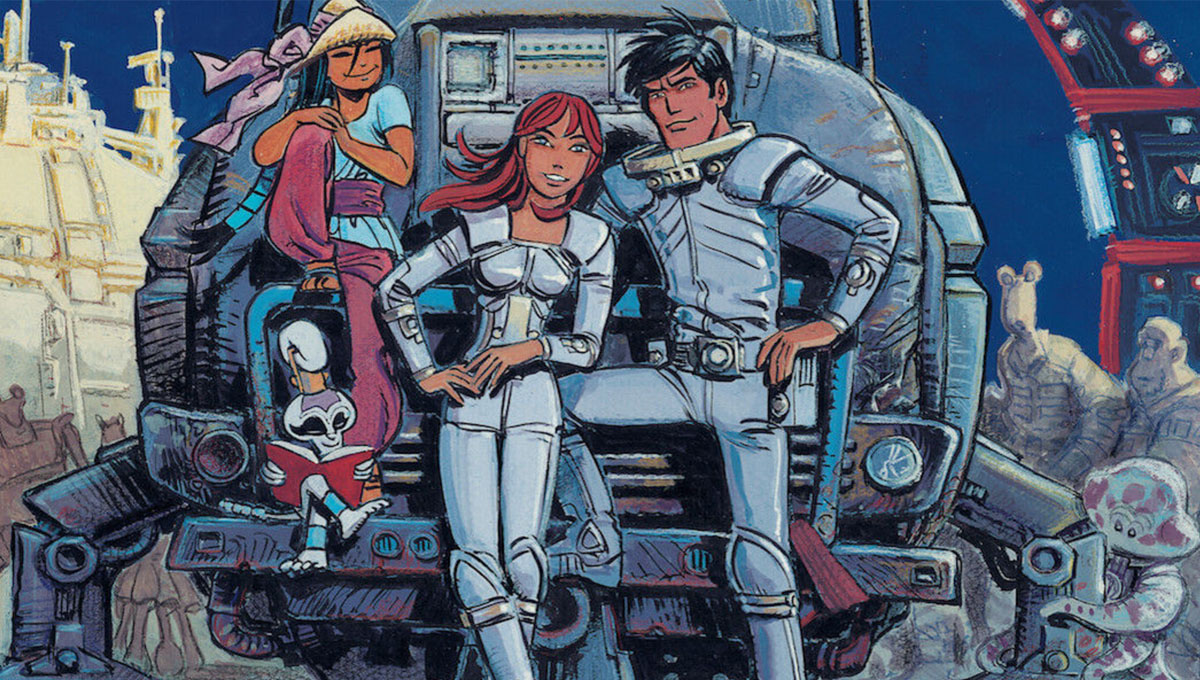 Fun fact: today marks nine years since The Dark Knight came into our lives! In honor of the mother of all recent superhero movies (IMO), let’s talk about a comic book adaptation you might not be familiar with: the upcoming Valerian and the City of a Thousand Planets.

Nowadays, it’s almost more unusual to see a blockbuster that isn’t inspired by a comic. But now that DC and Marvel’s biggest titles – and even outliers like Guardians of the Galaxy – are household names (and toys covering our desks), we don’t get too many movies based on comics that are surprises anymore. That’s where Valerian and the City of a Thousand Planets comes in.

This space and time epic directed by The Fifth Element‘s Luc Besson hits theaters this week. If you’re as big of a Fifth Element nerd as I am, you’ve been tracking this movie for awhile (and listening to that rad remix of The Beatles’ “Because” from the trailer on repeat). This visual trip is based on a French comic series – Valérian and Laureline – that ran from 1967 all the way up until 2010, and included a run in Heavy Metal Magazine in 1981.

The series kicks off in 2720 in the utopian Earth city of Galaxity where most of humanity lives out their days hooked up to machines that feed them constant dreams. The comic follows two Spatio-Temporal agents – Valérian and his companion Laureline (who is actually from 11th century France) – as they defend the present, the past, and the universe from time-traveling ne’er-do-wells.

While I love me some Wonder Woman, Spider-Man, and all “MARTHA!” memes from Batman vs Superman, in a film market saturated with larger than life heroes constantly trying to save the world, it’s refreshing to see a movie inspired by a long lost (and long running) non-superhero sci-fi comic. Hell, that’s why director Luc Besson figures Paul McCartney let them use the song “Because” in the trailer – he appreciated the originality.

While this comic isn’t exactly a widely known title, it’s been pretty influential. After all, it was doing space operas a decade before Star Wars hit theaters and just after Doctor Who and Star Trek materialized and warped into existence. And it had a heavy influence on the director himself; the movie adaptation is to Luc Besson as Avatar was to James Cameron, in that it was something he’d always loved and wanted to turn into a movie, but never had the technology for…until now.

There have even been some striking similarities found between imagery in early Valérian comics and Star Wars, begging the question: was Lucas a Valérian fan? Take this page below. Han’s carbonite, anyone?

Or the metal bikini that Laureline wears while in a ‘harem’.

One of my favorite nerdy things to do is look back at old sci-fi stories that lend influence to titles we know and love, and Valérian and Laureline fits that bill. I will say, the comic is definitely dated. There’s some ‘ol fashioned sexism (which Laureline regularly shoots down), the art is more newspaper comic-y than comic book-y, and it’s very slapstick. But it’s still refreshing for a big blockbuster movie to bring a comic like this to light, and even more refreshing to see a director creating their passion project. Because regardless of what the ‘Tomatometer’ says come this Friday, we don’t get enough movies that are done out of pure love and fandom anymore. And there’s something to be said for that.