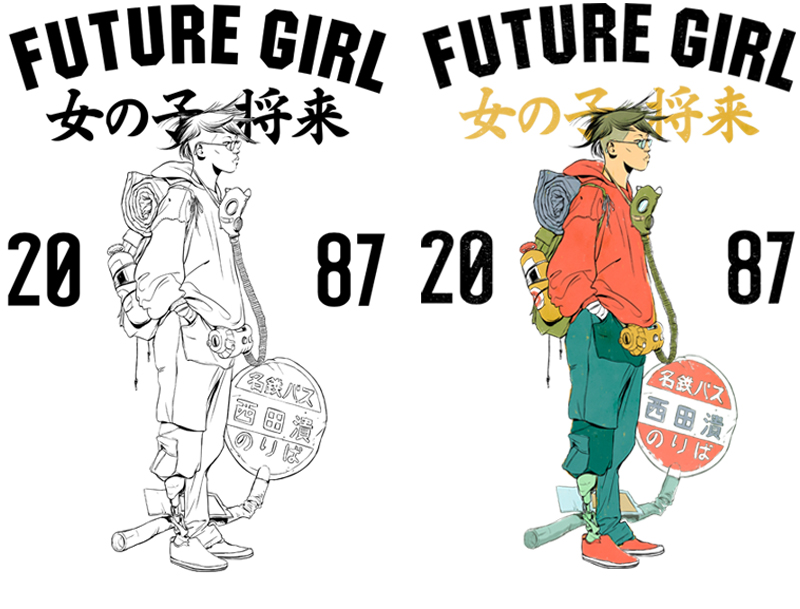 You don’t have to be an anime buff for it to have played some role in your life. The art of anime ranges from the intense Kamehameha wave in Dragon Ball Z to the Kawaii “pocket monsters” of Pokémon, and is as influential as it is beautiful.

And if we were the Senpai of our anime challenge, then we noticed the Akira-ish, cyberpunk look of Rafael Pereira’s “Future Girl.”

We talked to Rafael, a.k.a Hafaell, about the Japanese art of anime, the supercool sci-fi story behind his design, and about what futuristic worlds he would (and wouldn’t) want to live in. Check out the interview below!

Are you a big anime fan? What attracted you to this challenge?

I’m not, but I’ve watched a few that were quite remarkable, like Tonari no
Totoro, Akira, Memories and others. What attracted me was the challenge itself, really. I don’t draw anime or manga, so I tried to create and adaptation of European animation with a Japanese touch.

What kinds of art styles do you like the most?

I love the action scenes and all the details that it’s given to the background of the animation. They worry a lot with ambiance and I think it’s fantastic. I love Studio Ghibli’s style because of that, and also the aggressive lines from cowboy bebop.

What artists and styles most inspire you?

I’ve always loved to use black ink on paper, black on white, and that is an influence for me to this day. Moebius and Segio Toppi will always be references for my inspiration.

How would you describe your style?

I don’t know if I have a style. I like to experiment with different techniques, different ways to archive a result. I try to not get too attached to one style, but in the end we always end up creating something unique for ourselves, something personal and that defines the style, really. I just don’t know what it is.

I noticed that a lot of your art seems to have a futuristic look to it. What inspires your art?

I’m a sucker for sci-fi and cyberpunk literature. Definitely, the thing I like most to draw is the human figure.

What does the shirt say in Japanese?

It’s written: future girl. It’s like the original title and the foreign title. The sign on the floor is just a bus stop sign destroyed, that says: ‘bus stop’ and the city: “Nishida”.

Is there a story behind this character for you?

Yes, future girl is a futuristic ‘rock opera’ that narrates the path of this girl into a post-apocalyptic world. Here goes a “SPOILER” from the series: on the eighth episode of the fourth season you discover that she’s, in fact, a robot.

That’s awesome! So it’s 2087 in this design – what’s the world like in which this character lives?

I imagine a world collapsed by some kind of virus or bacteria that, after eliminating 95% of all world’s population along the years, vanished. And now the remaining survivors have to live in towns taken by nature and all the primitive dangers that comes along with it.

What are some of your favorite movies/shows/books?

Would you ever illustrate a full comic?

Yes, is something that I really want to do, but I haven’t…yet.

I don’t know the art scene here that much, I wander more on the internet seeing things around the world than interacting with people in the field here.

If you could live in any fictional futuristic world, which ones would you most and least want to live in?