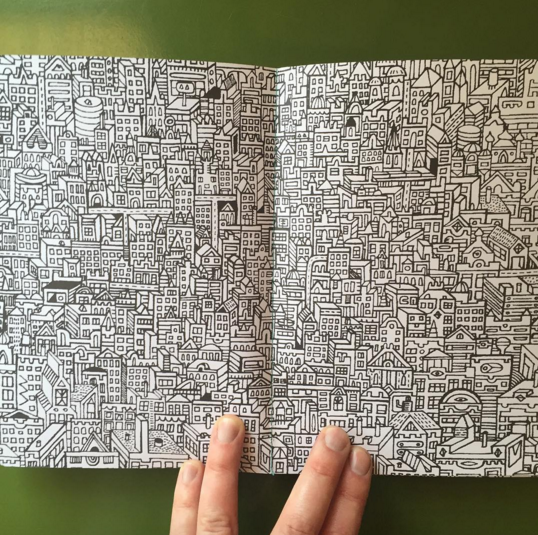 Architecture is all around us, and yet sometimes we forget to look around and see how beautiful it can be.

That’s the whole idea behind the “Cities” exhibit at Chicago’s Galerie F – celebrating cities by showing them to us through the different art styles of various artists. And the featured artist Nate Otto – a.k.a OttoNate – paints a whole new perspective on cities – literally and figuratively. His patterns – from vast murals to tiny , intricate cityscapes – show vast cities from a far away perspective, while somehow remaining incredibly intimate portrayals of sprawling urban jungles.

We talked to Nate about his detailed artwork, the “Cities” exhibit, and about finding inspiration in his (and our) hometown, Chicago. 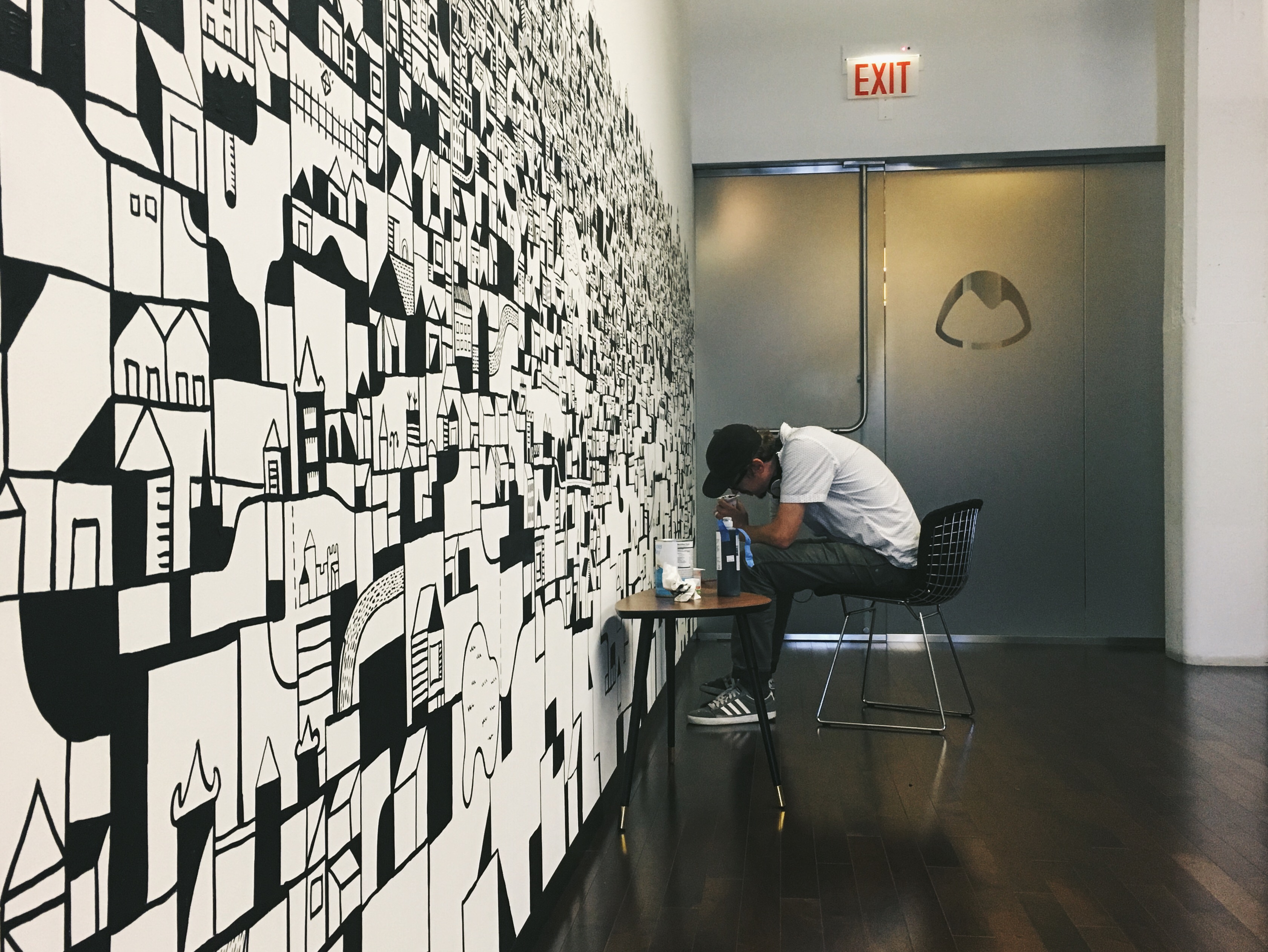 How long does each piece take? They’re so detailed!

People ask me this all the time, and the simple answer is “I don’t know.” I’m always working on many pieces at the same time. Sometimes a piece will come together very quickly in a way that I like, and sometimes I will struggle with a piece for months and months. Basically, I work on them until I like them. Some of the most detailed panels have surely taken more than 40 hours, but I don’t keep track. As long as I’m making and finishing new work all the time, the amount of time spent on each piece is irrelevant. If I knew how much time I spent on some of them, it would probably bum me out, so I just don’t worry about it.

Are you inspired by any particular city or place?

Chicago is my home and it is the place where I spend most of my time, so it is obviously the biggest influence. I’m always noting the shapes of buildings when I going around the city.

I have also travelled quite a bit in recent years. I’ve been to Paris, Berlin, Istanbul, Athens, and many other cities domestic and abroad, and I’ve sketched the architecture in all of those places.

For the most part, the cities I draw aren’t based on specific places. They are an amalgam of cities everywhere and in my imagination.

What started your interest in architectural patterns and architecture in general?

Being from Chicago, architecture is a big part of the history and geography of the setting. When I was a kid, I could identify several of the buildings in the skyline, so it has always been an interest.

As far as buildings becoming such a central part of my art, that is something that happened over time. There were a few years when I was doing exclusively large abstract oil paintings, and I always thought of them as abstract landscapes. A few years later I remember drawing some little imagined cities and liking the result.

For me I guess it’s really about shape and color and making something visually pleasing. That is my primary aim always. Drawing and painting buildings and experimenting within that idea and pushing the scope of what that means has become my primary art-making realm in recent years. It’s not because I’m obsessed with architecture, but because it gives me parameters in which to experiment with visual ideas, and each idea leads to more ideas.

What is your take on the theme of the show? What does it mean to you?

Galerie F pitched the show idea to me and I liked it. The “cities” theme went right along with what I was already doing, so it allowed me to just keep on doing my thing. “Cities” is rather broad and can encompass a lot of different paths. I tend to not like restrictive themes. I’m really self-driven in terms of ideas – I don’t think I’m going to run out of them any time soon. This theme really just allowed me to keep on doing what I want to do knowing that it would fit.

What other artists should we keep an eye out for at this exhibit?

I really enjoyed all of the other artist’s work in the show. Galerie F invited the first round of people to the show. When I saw the list of names, I liked it but I thought there should be a few more women in the show so I put forth a few more names.

There was some really great work from other artists in the show and I’m honored to be in their company. The Ben Tolman piece in particular really blew me away.

Which is your own personal favorite art piece you created for the show and why?

The work really runs the gamut I think. There are some pieces that are rather abstract but are still “cities,” and there are others that are the highly detailed panels that I suppose I have become known for. I like everything I put in the show or I wouldn’t have shown the work.

My favorite is probably “Three Bridges” just because I put a lot of hours into it and I think it turned out well. I figured it would be the first piece sold at that show, and it was.

What are some tips you can give to other artists looking to get into art exhibits?

For years I didn’t show my work and the whole enterprise seemed really pointless and bummed me out. Then, over time I just built up so much work that it became necessary to get it out in the world. Frankly, I don’t really know how to go about getting shows but I’m in a lot of them so I must be doing something right.

My focus is on making the work. 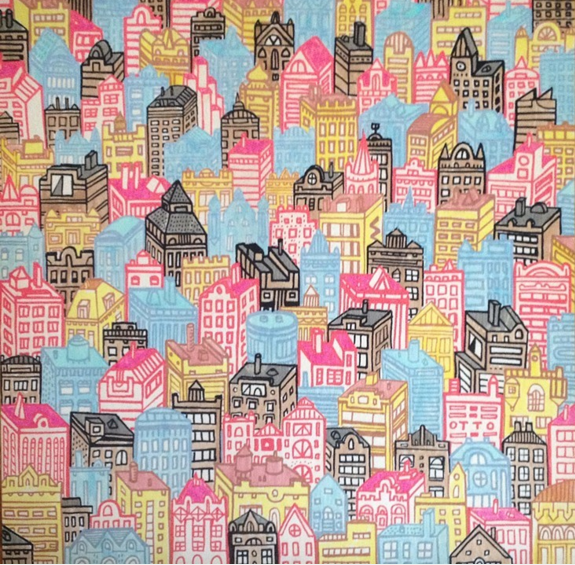 I think as long as you are making good work, good things will happen. And you have to make a lot of it. It is not good enough to have a few solid pieces – you really have to add to the portfolio all the time. Also, have a good website. You need to have a place where people can find your work. It can’t be something that requires a login or a Facebook page. Have a real website. I curate art for a couple of bars and when people reach out about showing their art and they don’t have a website, I don’t consider them.

Also, I try to be a good business partner with the galleries I work with. Galleries have to make money. When I have a show up or an agreement with a gallery, I make a point to honor it and funnel potential sales through them. Like any other business, this business is about relationships with people. Don’t be a dick and work hard. That’s the gist of it.

Nate Otto’s work will be up at Galerie F in Chicago until June 19th – check it out!